It’s hard to believe that once upon a time, women were actually celebrated for—gasp!—their natural god-given bodies. That’s right—thin hasn’t always been in, not has the desire to constantly strive for it. In fact, the female standard of sex appeal and beauty has gone through many drastic changes over the last several hundred years, showing us that what’s universally considered beautiful and sexy is ever-changing—as are fashion trends through the years—and probably will be very different in 100 years than it is right now

MORE: How To Look Skinny in Pictures: 12 Genius Tips

To prove how our definition of sexy has shifted, we’ve compiled a timeline of the major trends over the past 600 years, starting with the Renaissance up until the last decade. As we track everything from body types to hair and makeup, you may be surprised to see how the definition of sexy has changed so drastically over the years. 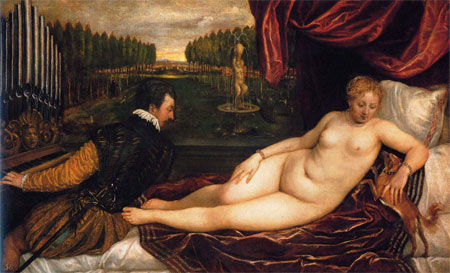 Renaissance: From the 1400s to the early 16th century

Body Type: The ideal Renaissance woman was more voluptuous then any other time in history. Paintings from this era depict women who likely would be considered overweight by today’s standard, but at that time these full-figured ladies were the epitome of sexy.

Beauty: The term blondes have more fun may have stemmed from the Renaissance, because they believed that the lighter the hair color, the better. As for makeup, pale ivory skin was considered sexy, and vermillion was used to tint the lips to a deep red color.

Body Type: Unlike Renaissance women, Victorian women were highly body conscious. Sexy meant having the smallest waistline humanly possible, and in order to achieve this look, women wore corsets. Some were wound so tight that women could hardly breathe, to the point where sitting down was completely out of the question (and many women would even break ribs trying to get their waistlines down to an inconceivable 12 inches.) Layered petticoats, hoops, and bustles became popular, all of which magnified the derriere.

Beauty: Modesty was the operative word when it came to Victorian makeup. High-class women were expected to use makeup sparingly. Bold colors were considered uncouth, and reserved for prostitutes. Some religions at the time even proclaimed beauty products to be the look of the devil. Yikes!

The Roaring 20s: The era that brought us Coco Chanel, shorter hemlines, and flappers.

Body Type: The 1920s were a time when women aimed to hide their curves. In fact, some would even bind their chests with strips of cloth to achieve a boyish look. The loose silhouette of the short and swingy flapper dress was a stark contrast to the corseted waist of Victorian era gowns, while elastic webbed girdles replaced corsets and gave off the look of a flat abdomen.

Beauty: Going right along with the boyish look, the hair bob or finger wavewas a big trend. Bold makeup, which had once been considered trashy, was now considered sexy. Powder was applied to make the skin look as pale as possible and eyebrows were lifted and penciled in to appear thin and bold. Kohl was used to line the eye and achieve an overall dramatic look.

Beauty: Hairstyles became more feminine than they had been in the 1920s. Hair color varied depending on which movie star one was trying to emulate. Jean Harlow made platinum blond a trend, meanwhile, Rita Hayworth (above) made being a redhead popular. Last, but not least, Marlene Dietrich represented for all the brunettes out there. Makeup became a little less drag, and more girl-next-door than in the ’20s. The pasty white skin trend was finally passé, and women started opting for foundations closer to their natural complexions.

Body Type: The desired shape in the mid-century was the hourglass figure popularized by movie stars like Marilyn Monroe and Grace Kelly (above). Women were told that their primary goal was to catch a man and have a family, so they were taught to dress to allure, but rarely showed a great deal of skin. Rule number one was that women were never supposed to leave the house looking sloppy. Three-quarter-sleeve coats, full belted skirts, button-downs, and prim sweaters were the standard (think Betty Draper when she first appeared on “Mad Men.”)

Beauty: Hair was usually kept short at just below the shoulders, and was worn in soft, curly, or wavy styles. Straight styles were considered undesirable, so rollers became a girl’s best friend. Women also began to focus more on having flawless skin than anything else. The goal was a peaches and cream complexion.

The 1960s: The era that brought us hippies, mods, and Twiggy

Body Type: Mimicking the popular skinny models of the day, like Twiggy (above), women became obsessed with being rail thin. In terms of fashion and beauty, two polar opposites emerged: the hippie flower child and the modern swinging ’60s woman. The hippies put more of an emphasis on casual staples like bell-bottoms, tunics, and platform shoes, while the super-mod Twiggy-girl put time into her appearance and favored things like high boots, miniskirts, and short shift dresses.

Body Type: The freewheeling 1960s forever changed the way women viewed their bodies, and by the 1970s, the thinking-thin phenomenon was in full force. Clothing was sexy and disco-ready, with lots of wrap-style dresses, oversize sunglasses, and high-waist jeans, and most women aspired to emulate the ultra-glam ‘Studio 54’ look popularized by Bianca Jagger.

Beauty: The late Farrah Fawcett (above) revolutionized the way women styled their hair. Her long, layered, feathery haircut became the look that every woman wanted to have.This decade also marked the beginning of the bronzed beach look and with it, the popular tanning booth trend. Women began relying on bronzers and self-tanners, things many women (and some men) still can’t do without.

The 1980s: The decade of big hair, big shoulders, and the Material Girl.

Body Type: The aerobics exercise craze of the ’80s further emphasized fitness for women. Women were expected to maintain a certain weight, but still appear toned, all without being too muscular. With all these body stipulations, it’s no wonder that the prevalence of eating disorders skyrocketed throughout the decade. The ’80s also epitomized over-the-top fashion— neon, suits with football player-sized shoulder pads, and spandex were just a few of the quintessential trends of the decade that were considered sexy.

Beauty: There are only two words to describe ’80s hair: big and bigger. The mantra of the decade was the bigger the better, and with all those aerosol cans of hairspray, we’re sure the ozone took a pretty big hit right around this decade. Over-the-top makeup was de rigeur—just check out Madonna above. Women opted for brighter colors, like the infamous blue eye shadows and liners, and shiny pink pouts. Also, thanks to Brooke Shields, bushy eyebrows were also considered very sexy—something’s come back around in recent years.

Body Type:Models like Kate Moss further perpetuated standards of extreme thinness. The heroin chic trend came about in the ’90s—a strung-out and emaciated appearance was the coveted look. Thanks to a few rebellious kids in Seattle, the ’90s also gave rise to the popular grunge movement, characterized by flannel shirts, Doc Martens, and an overall unkempt look.

On the other side of the spectrum, the spandex and fluorescent color trends of the ’80s stuck around for the early part of the decade (as evidenced by the wardrobes in “Beverly Hills, 90210,” and “Saved by the Bell.”)  Lycra was introduced, and midriff-bearing tops also became fashionable which coincided with the rise of pierced belly buttons and toned tummies.

Beauty: One of the most popular ’90s hairstyles was the Rachel cut, named for Jennifer Aniston’s character on “Friends.” Other popular hair trends included the bob, bangs (a la Brenda Walsh), and bleach blond color (remember Donna Martin?). Kate Moss epitomized the androgynous ideal, which led many women to take a minimalist approach to makeup.

The New Millennium: 2000 to present, an era of choice and expression

Body Type: Although we’re currently in an age where women have more choice than ever before, women are still expected to live up to an impossibly thin body shape. The fact is that now, more then ever, the price of beauty is extremely high. This is evident in the huge surge in plastic surgeries that have taken place in the last decade– Heidi Montag anyone? We’re also seeing a re-emergence of almost every major fashion trend of decades past, from shoulder pads to cinched waists. We aren’t all copy-cats though, the emergence of super-low-rise jeans, Juicy sweatsuits, and trucker hats is unique to the early Aughts (and, thankfully, faded out soon after.)