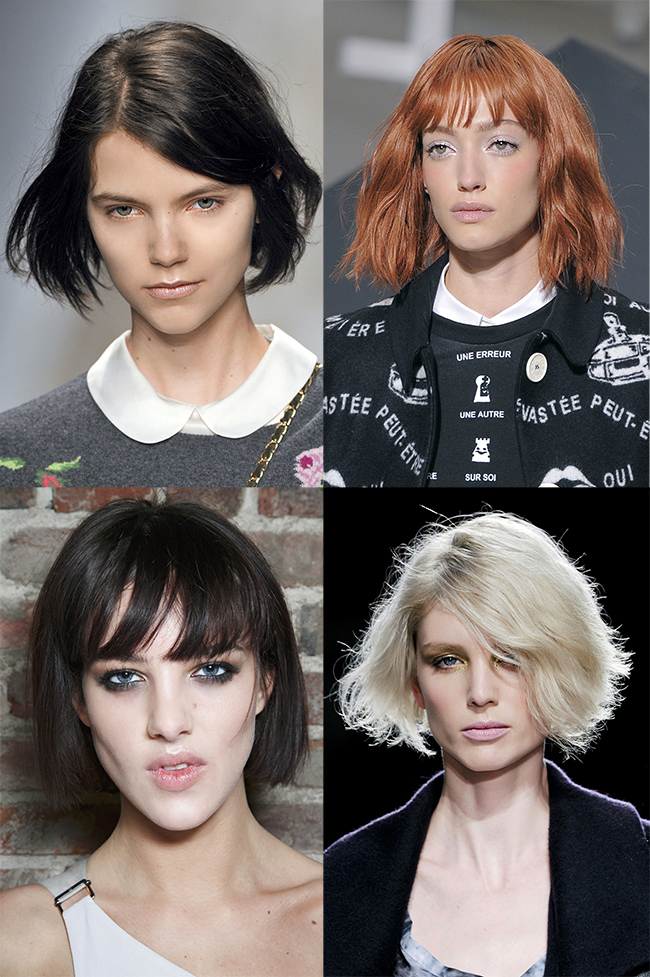 Few things are in actuality “universally flattering.” There’s the wrap dress, red lipstick, and now—the bob haircut. When it comes to short hair, everyone is generally skeptical as to what works with them. Either their face shape or hair texture is something to work against. Long hair seems to be the universally flattering hair style, since a long sheath of healthy hair is always a good look. But if you’re itching for a lighter style–or perhaps a dramatic change in hairstyle–the bob will always be around. It may conjure images of soccer mom hair, Victoria Beckham‘s famous A-line bob from the early aughts, or just that really bad haircut you got after a gnarly breakup. But if you’ve been paying attention to pop culture at all, bobs are on fire now. Everyone from Lauren Conrad to Emma Stone, Emma Roberts, Karlie Kloss, and Beyoncé (you get it, lots of A-listers) have been chopping their locks in favor of above-the-shoulder hair that generally takes them from “pretty starlet” to “cool confident chick.” You’re going to be pretty your whole life, but wouldn’t it feel awesome to feel really cool also, if only for a little while?

If you’re ready to take the plunge, we got some tips from the man responsible for giving women some of the most transformational haircuts of their lives to date (like Emma Watson‘s post-Potter pixie), Rodney Cutler at Cutler Salons.

“All it really comes down to is length and angle,” Rodney had to say about the supposed universal compatibility of bobs. As long as you find the most flattering angle and length for your face shape, a bob will work for you. “Bobs have been around since Cleopatra—it’s a hairstyle that has been around for so long simply because it works. It’s kind of like the ponytail in that some styles just inherently work on everyone.”

What you should keep in mind though is your hair texture and face shape. Depending on how much time you’re willing to dedicate to styling, you can customize what will be best for you. Very curly hair? That will require some strategic layering. Fine hair? A blunter chop might be your cup of tea. Bangs or no bangs? There are a surprising amount of options. For round faces, don’t worry—a bob can be very flattering, especially with a side-part and face-framing layers that go slightly below the chin. You don’t want the shape too angled or layered or else it may appear rounder, so hang onto some weight on the bottom. This goes for heart-shaped faces too, though more volume on the bottom would balance out a narrower chin. A square jaw would benefit from softer angles framing the face, slightly below the chin. If you have an oval face, rejoice because most any hairstyle works in your favor.

Thankfully these days, what makes a bob so cool is its undone quality. We’ve moved away from the Vidal Sassoon iconic rounded graduated bob and into more textured territory, which is as easy as “waking up like this.” You can still rock textured styles if your hair is straight and fine. That’s where products come in.  For the easiest wash-and-go texture, rubbing a ping-pong ball sized pump of mousse into your hair and twisting and scrunching it into your hair from mid to ends will give you softly separated texture when air-dried. Beach sprays and texturizing pomades and waxes work great for naturally wavy hair—you can pin-point where you want the movement and sculpt away. For the undecided, you have the option of a mousse pomade hybrid, like R+Co’s Aircraft Pomade which gives you great second texture without the look of actually having product in your hair.

There really is no wrong way to wear a bob, whether it’s neat and pinned a la Margot Tenenbaum or sexily mussed up like Debbie Harry—you’ve got the world at your follicles. If it’s good enough for the queen of the Nile, you can be confident that this is a style that elevates your look.

MORE: How To Pick The Best Bob For You