A little over a year ago, I received an invite to the launch of Fenty Beauty, with Rihanna in attendance. At that point, scarcely any details had been revealed about the brand, other than that the multifaceted, ultra-talented performer participated in its conception from start to launch. It’s an understatement to say I was eager to try whatever Rih Rih—whose track record includes too many wins to count—planned to unveil.

Drinks flowed, products were presented in impeccable fashion, and the woman of the hour moved among the crowd and chatted about Fenty the way a mother talks about her newborn. It’s a night I’ll never forget, simply because it introduced me to something too many big-budget brands have failed to accomplish until now: a collection that reflects the full spectrum of consumers, from the top boss and models in the ads to the women using the products. And the best part is that we didn’t need a press release or Instagram post to spell it out for us. The proof simply existed.

Consumers buy products because they work—not because someone convinced them they weren’t forgotten.

Fenty’s inclusiveness has been fundamental from its inception. Its foundation famously comes in 40 different shades, and its marketing boasts models of all shapes and sizes. It’s obvious that Rihanna and her team made a point of ensuring that the lineup wouldn’t exclude anyone. And while I appreciated this about the brand from day one, only now am I realizing what Fenty does better than its competitors—it’s deeply authentic. When companies “walk the diversity walk,” there’s no need to call it out. Consumers spread the word about great products because they actually work for them—not because someone had to convince them that they weren’t forgotten.

Rih drove this point home (and probably boosted sales) when she responded to criticism for not including trans models in her ads: “I’ve had the pleasure of working with many gifted trans women throughout the years, but I don’t go around doing trans castings!” she wrote in the screenshot. “Just like I don’t do straight non trans women castings! I respect all women, and whether they’re trans or not is none of my business! I don’t think it’s fair that a trans woman, or man, be used as a convenient marketing tool! Too often I see companies doing this to trans and black women alike! There’s always just that one spot in the campaign for the token ‘we look mad diverse’ girl/guy! It’s sad!” 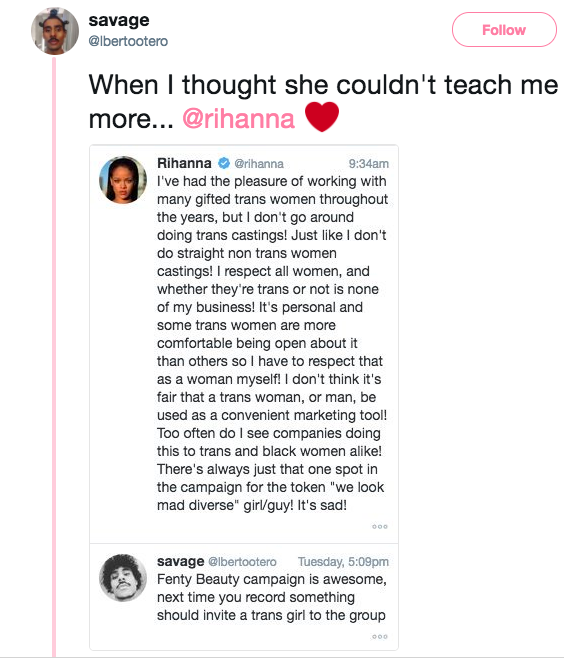 MORE: Fenty Beauty Reviews That Will Make You Laugh and Cry at the Same Time

When you take all this into account, it’s pretty clear that Fenty’s explosive successfulness was inevitable. And of course, as soon as Fenty consumers raved about the inclusive shade range, every other brand started pointing out theirs. Checking my inbox felt like a game of catch-up, in which a never-ending stream of brands reminded me that their foundations were also in double-digit territory. (I’m not knocking MAKE UP FOR EVER for being proud of its 50 shades—but the overall sense of industry competitiveness about catering to diversity, as if a range of human skin tones is a revelation versus a centuries-old fact, is a little grating.)

This reversal in attitude and strategy is especially glaring to me, since in my five years as a beauty editor, I’ve grown accustomed to feeling left out. Even back when I worked for a black publication, there were plenty of instances when I received tone-deaf packages, filled with products that my coworkers and I couldn’t use—like BB creams whose darkest option was “tan” or “honey,” or sunscreen products made without zinc (which tend to show up ashy on brown skin). I’ve stopped keeping track of the times I’ve attended an event, only to have a brand rep awkwardly glance in the direction of us lone black editors in a sea of white ones while discussing how that sandpaper-hued concealer will somehow magically work on all shades of brown.

In my years as a beauty editor, I’ve grown accustomed to feeling left out.

Now, not only is it suddenly the standard for brands to formulate products that work for everyone—it’s actually expected that brands will be called out if they don’t (see tarte’s Shape Tape, It Cosmetics’ Bye Bye Foundation and even Kim Kardashian’s 3-Step Concealer Kit). We’re faced with a sudden and startling tsunami of cultural and marketing influences that aren’t just embracing people of color, they’re using us to prove how woke they are because that’s on trend right now.

I’m not complaining about being included, but I can’t help but question the motivations of profit-driven companies that only seem to notice my demographic now that not noticing it is officially a bad look. It almost feels like companies have wiretapped the private conversations I’ve had with colleagues of color and are finally adjusting their branding and formulations accordingly. Can anyone blame us for feeling whiplash?

Now, it’s the standard for brands to make products for everyone—and it’s expected that they’ll be called out if they don’t.

MORE: The Key to Sustaining Beauty’s New Era of Inclusivity

I don’t have a solution for the current situation—and, yes, it’s an improvement from the past. But I don’t want to get too hung up on that, because as far as I’m concerned, this should have been the status quo for a long time. Do we really have to applaud beauty brands for acknowledging that we (and our plainly visible skin tones and hair types and grooming needs) exist?

I appreciate people and brands that have fallen short in the past working overtime to compensate for those failings. But the circumstances now feel out of balance in a new way. I still sometimes feel like a number or a name to check off a PR list; not a living, breathing human. Other times, I feel as though I’m being reached out to solely because of my skin color. I have yet to experience a happy medium.

The diversity movement has taught me that it only takes one brave soul to challenge the status quo.

In hindsight, perhaps I could have been more vocal in the past about my gripes, too, even when it felt like they fell on deaf ears. I’m guilty of sometimes falling in line with bandwagon culture, only complaining about things when others do. It’s less daunting to rally for a cause when you’re not alone. But if this new diversity movement has taught me anything, it’s that all it takes is one brave soul to challenge the status quo. More often than not, there are people on the sidelines ready and willing to join the fight.

But as someone with access and a platform, I know it’s my responsibility to go beyond that. We—especially editors of color—need to do a better job of uplifting black-owned labels like AJ Crimson that have always put women of color first and, admittedly, still don’t get the proper shine they deserve.

I need to be brave, speak up, and ensure that I’m advocating for changes that go beyond the pretty ads and swatches we see on our Instagram feed. My only hope is that the key holders of our industry are doing the same to ensure that what currently feels like a trend with questionable motivations soon becomes the thoroughly authentic status quo.