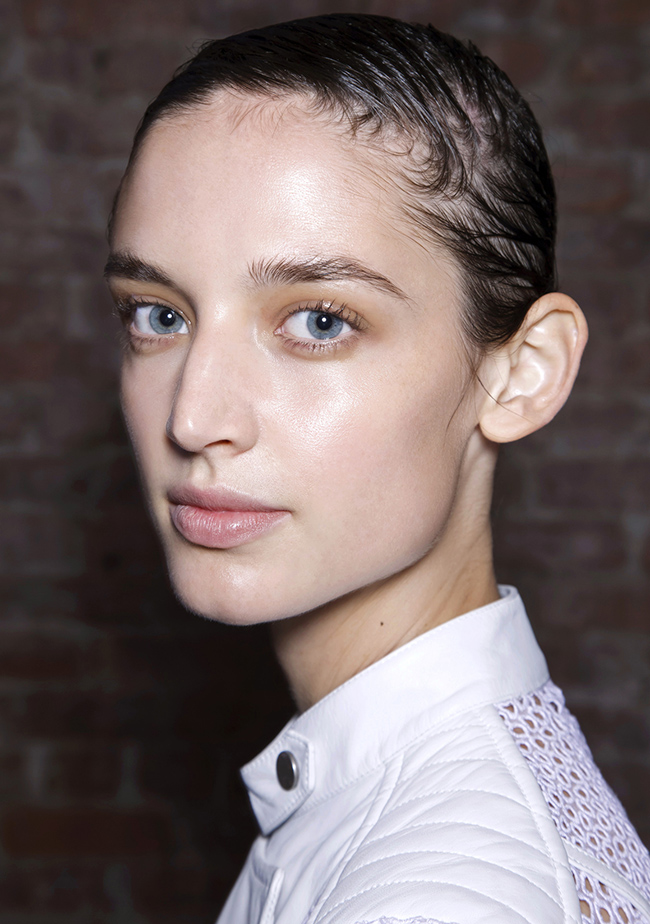 You probably know those canned spray waters from airplane goodie-bags or model fodder for backstage runway shows. Aside from summer time when it’s scorchingly hot and humid, a refreshing spray of cooling water can be a godsend. But otherwise, you probably wouldn’t really have much use for it, would you? We thought so too, until a chance encounter with Elizabeth Arden’s Global Makeup Artist, Rebecca Restrepo, opened our eyes to the multiple benefits of toting around a facial mist. You’ve probably seen them in aerosol-looking Evian or Avène Thermal water canisters. Makeup artists keep them in their kits because when they’re making up models’ or celebrities’ faces all day, even a touch-up needs a refresher before you spackle on more makeup. Here are some tips we gleaned from Restrepo about how she uses spray water.

For Re-dos: As mentioned just before, Restrepo mentions that “when I’m with a client for an all-day press event, touching up a full face of makeup, no one wants to appear like they’re wearing layers upon layers of makeup, even if they are.” A veil of water sprayed on the face before touching up softens your current makeup so it blends more easily with what you put on top of it. That said, it also works as a finisher with a very light quick spritz– not so much for setting, but again for softening your whole look so your makeup looks dewy, natural and lived-in.

As A Skin Care Primer: When you wash your face you may not think about the fact that the water you’re washing with is the key factor in imparting moisture into your skin. After cleansing and blotting with a towel, the water on your face generally evaporates within seconds. After that, the moisturizer you apply is just sitting on your skin, not working to its full capacity since most moisturizers are meant to seal in moisture rather than impart it. Giving your face a good spray with thermal water, rose water, or even cucumber water is not only refreshing and calming to your skin, it lays a fine layer of moisture on your skin to prep and prime it to absorb all your serums and moisturizer the way they’re supposed to be absorbed.

For DIYs: Restrepo says that when she knows she’ll be working with a high-profile client (hellooo, Lucy Liu and Alicia Keyes!) whose skin she’s familiar with, she’ll concoct and refrigerate a brew of a customized spray the night before to take with her on shoot. Often it’s as simple as brewing chamomile tea or infusing cucumber into water and bottling that. Chamomile is calming and cucumber is cooling, so you can gear your face mist for whatever skin care needs you have. She does warn however that these homemade DIY sprays do not last, and should be discarded after a day or two. Even if you’re cool with putting distilled water in a bottle to tote around for spritzing, those should be replaced daily. Canned or thermal water is purified before bottling so they’re made to last, untouched by any environmental impurities. Your Brita however, is not.

For Making Your Makeup Behave: For the times when you apply makeup only to discover that there’s a boo-boo suddenly appearing underneath (dry skin, ahem), instead of trying to fix it with either more makeup or adding oil/moisturizer to the area, the problem spot and any side-effects can be nixed with a spritz of water rather than the aforementioned quick-reaches. For instance, when applying foundation which ends up highlighting dry patches or blemishes, rather than trying to blend it with moisturizer or facial oil– which doesn’t play well with the foundation’s formula, causing it to separate– misting a light layer of water over your face and then spot-dabbing concealer or foundation will allow you to moisturize and cover the area without highlighting the blemish.

Restrepo’s motto for this kind of thing is generally that what’s good for your insides is also good for your outsides. Since the water you drink is distributed amongst your inner organs before it reaches your skin (skin is water’s last stop before exiting your body), your skin could always use a little boost in the hydration department. No matter how many models claim that drinking lots of water is what makes their skin so clear (a healthy balanced diet AND staying hydrated will do that), you probably won’t be able to drink enough water to hydrate your skin from the inside. That’s where facial mists come in. The great thing about them is that they’re much more versatile than for just quenching skin thirst.