Taylor Swift really leaned into the Folklore vibes at the Grammy Awards, wearing a flower-adorned Oscar de la Renta mini dress and messy-chic hair. In fact, although the dress is killer, it was Swift’s Grammys hair that had everyone talking. At first, it seems like she’s rocking her usual choppy, straight-across bangs, but when she turned around, it was a big surprise.

We don’t know who did Swift’s hair for the Grammys but it’s possible she did it herself. She’s been doing that all of quarantine. For the music video for “Cardigan,” she wrote on Instagram: “The entire shoot was overseen by a medical inspector, everyone wore masks, stayed away from each other, and I even did my own hair, makeup, and styling.” So, she’s definitely capable of doing her own glam.

If she did to it herself, it’s pretty impressive. When Swift turned around, you could see her intricate twists tied up in low pigtails. 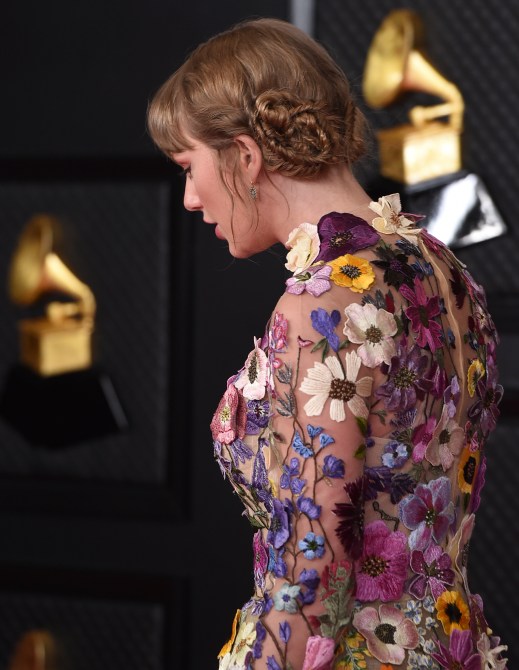 Her makeup is warm and matches the pink shades in her gown. The rosy eyes are anchored by her classic black eyeliner and her lips are a subtle pink hue. It’s both pretty and glam enough for the red carpet.