Known for their slogan “Nails did, hoops big, wings sharp, mouth smart,” Bella Doña has become the go-to for Chicana aesthetics with a side of hilarious memes. The brand, founded in 2013 by Lala Romero and Natalia Durazo, is both streetwear and lifestyle, and now with the launch of offshoot brand Sweet Street Cosmetics, beauty. But before they became a force on the ‘Gram and beyond, LaLa was a singer-songwriter in need of styling for a music video and Natalia was running her jewelry business, Honey B Gold.

The pair met on Twitter, bonding over similar upbringings and shared beliefs. They moved in together just two weeks after exchanging messages, furnishing their shared space with thrift shop finds and swapping closets. It was then that they recognized the gap in streetwear brands owned by women who looked like them, and thus Bella Doña was born. The brand’s instantly recognizable aesthetic, which directly references Chicana culture, was baked into their personal brands long before they met.

As a singer-songwriter, LaLa used her music videos to represent the community she grew up in. “My whole thing was trying to get people to see it through a different lens than the way the media portrayed it,” Romero shared. “Everything I saw around me was beauty and flyness and it was never painted in the media. I always looked at it very differently and I always felt that there was so much style in the hood.” For Durazo, that meant paying homage to the neighborhood through her pieces. “Everything that might’ve been a stereotype of being ghetto or hood, to me, was always beautiful. It was another way of shining the light on our culture and saying ‘No, this shit’s tight, we’re so proud of where we come from.’”

Durazo and Romero are self-described “‘round the way girls” who learned the ins and outs of entrepreneurship by watching their respective parents work hard and build their own businesses. Romero’s father is a gardener who once juggled multiple jobs—including a meat cutter gig at Ralph’s (a California-based supermarket chain)—to secure health insurance for his family. Durazo’s father is an upholsterer who built a business while also working a traditional 9-5. “That’s how I learned to work,” Durazo shared while recalling the many nights her parents would work on furniture in their garage. “That’s what I thought was normal.”

This inherited work ethic would lead to the birth of Bella Doña, Sweet Street and other businesses for the duo. Durazo continues to run Honey B Gold and the pair also teamed up with Los Angeles Cruise Night for Scam and Jam, a party series where people can jam, and um, scam. All of their ventures connect to one central theme: celebrating the hood and ensuring Black and brown people feel seen, heard, and supported.

In an era where some brands continue to use cultural appropriation as a marketing tactic, Romero and Durazo are refocusing the narrative. “A lot of the beauty, style, fashion contributions that Chicano culture has given to this country and to the world has been overlooked,” said Romero. “The only way to build up the confidence of the girls in our community is to remind them that they are the beauty standard and they come from a long line of flyness.” This can be especially difficult for younger women who turn to media for their inspiration, where accurate representation of Chicana and L.A. culture is severely lacking.

Bella Doña seeks to change that with their inclusive editorial shoots, where the baby hairs are slick, the cars ride low and the wings are always ultra-sharp. Sweet Street is a continuation of that aim and anchored in the beauty routines of ‘round the way girls they’ve always catered to. “It’s almost the same story but a different way of telling it. Bella Doña is a love letter to our Latin heritage, and Sweet Street is more like a love letter to the hood. All hoods, everywhere in the world. It can be any girls, any color, from any place similar to the way we grew up,” said Durazo. 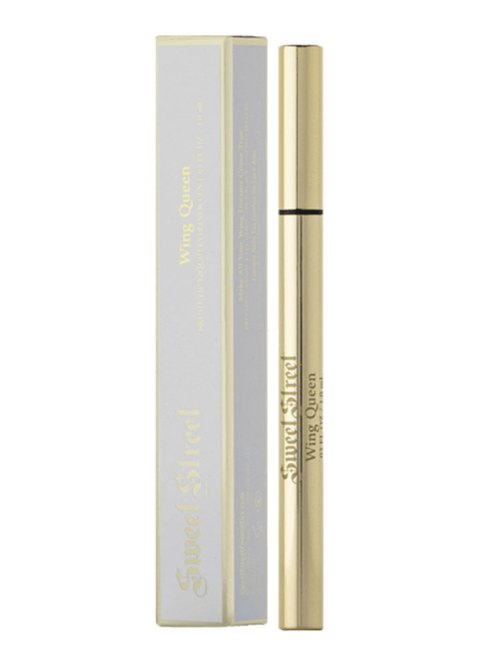 The cruelty-free makeup brand launched in October with a single product: black liquid eyeliner. “Wings are inherently a Latina right of passage,” Natalia Durazo explained to me as I imagined a younger version of the entrepreneur applying liquid liner under her mother’s guidance. In true Bella Doña fashion, the duo built excitement for the launch with a week-long series of short films titled “Wing Queen.”

Each clip profiled a person from Romero and Durazo’s tribe with sharp, scene-stealing wings, and an interesting story to tell. There’s Simone, the nonprofit founder from The Bay with a nearly-straight wing and gems on her eyelids, Mija, a drag queen who describes her ultra-dramatic, eyelid-obfuscating wing as “the first warning,” and Deysi Danger, a Mexican influencer who says wearing sharp liner is a way of letting people know that you’re “that bitch.”

No two wings are the same, but one thing rang true across the seven profiles: wings have the ability to transform and empower, no matter who’s wearing them. The liner already has celebrity fans like body-positivity activist and model Tess Holliday, a friend of Romero and Durazo, but they’re not after co-signs from big names. “It is fun to get that feedback from people with big names and followings in the beauty community,” Romero shared, “but we’re always here for the girl in the hood. That’s our barometer of if something’s ‘it.’”

But wings are just the beginning. In February, the brand will launch a lip duo called “Thick and Thin” in Chicana-classic shades. “The liners are a lot darker than the lipsticks,” Romero revealed, adding that the iconic red lip with black liner will be part of the lineup. Following the lip duo, fans can expect a slew of essentials in spring, and eventually, a full collection by year’s end. Ultimately, the goal is to make products, which could expand beyond makeup, that speak to the community. “It’s really about storytelling for us. We’ll continue to grow. Maybe one day we’ll make a movie or put out some artists.” With the hood’s cosign, of course.