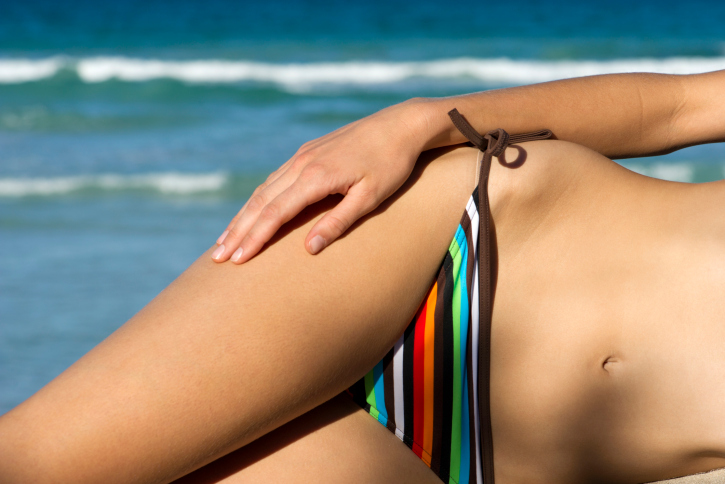 While we may have let our fur grow, hidden under sweaters and wool tights over the winter, now that it’s bare leg and swimsuit season, that fur is a bit of an unwelcome layer. Shaving is fine for legs or underarms on a more frequent basis, but if you really want the smoothest skin for the longest amount of time, you’ve got to bite the bullet and tear those suckers out at the root one way or another. Waxing delicate regions like your bikini zone is no small feat, but unless you don’t mind hair sticking out of your bikini bottoms, it’s your best bet as far as hair removal goes. That is, until we learned about sugaring.

Sugaring removes hair the same way wax does, but since it’s made from a concoction including sugar, lemon, and hot water, it’s all-natural and much more gentle for sensitive skin. We visited Hibba salon in New York City to get our first bikini sugar treatment and let us tell you… the ouch factor is pretty much similar to waxing. However, we can vouch that after a comparison with regular wax, sugaring leaves no post-removal irritation and also no sticky residue since it rinses clean with water. That’s a big plus for anyone who’s ever left a salon freshly waxed with an uncomfortable sticky feeling on their bottom. Sugar-waxing totally works with fine hair anywhere on your body but not so much for brows.

Hibba Kapil, the salon’s founder, explains it like this: “The process of sugaring is similar to azulene wax, the sugar gel is removed from a can with a spatula, applied to the skin in the direction of hair growth, and is pulled with muslin strips in the opposite direction. It is 100% natural and great for pregnant women or those with highly sensitive skin. It only sticks to the hair and does not remove the first layer of your skin (unlike all waxes). After a few sessions, sugaring drastically reduces hair-growth.”

It’s advised that you avoid hot water and super hot environments (so no saunas or working out) for 48 hours post-sugaring because your pores are still open and sensitive despite the lack of irritation. You can exfoliate after that time, too, to prevent any ingrown hairs. Hibba actually offers a “Bikini Balm” to soothe your skin and prevent those in-grown hairs, as well as a natural exfoliating ayate cloth (think of it like a mega-konjac sponge). While the perks of sugaring compared to waxing probably win out, still keep an eye on your skin if you get the treatment and don’t just assume everything will be gravy. Everyone’s different, so something that doesn’t bother one person’s skin might leave yours a bit frazzled. But if you’re a tried-and-true waxer and want to try a more natural alternative, definitely give sugar a shot.

Though sugaring is an ancient form of hair removal (uh, since 1900 BC!), it’s slowly gaining mainstream popularity now for its natural and gentle hair removal alternative to irritating waxes. Hibba is one of the few places in New York City that offers the service also knows as “halawa gel,” but look for it wherever you live if waxing your bikini zone leaves you red, itchy, and irritated.