Awards Season is over, and what a season it’s been, with more killer looks on the crimson carpets than ever. As we look back at the many ceremonies – and the red carpet fashion frenzy that preceded them – we see four strong trends emerging when it comes to ladies and their lips. 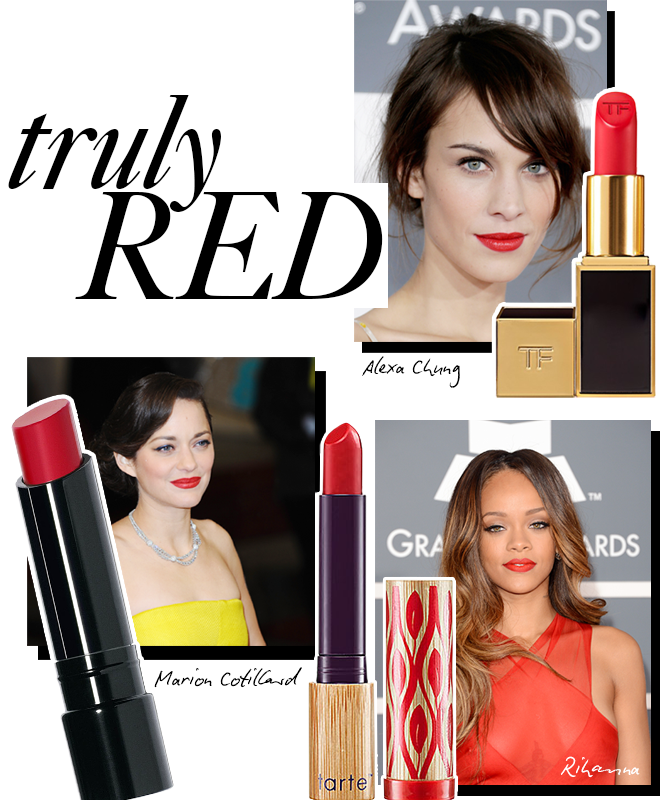 The red lip is a classic red carpet look — it was a mainstay of starlets in Hollywood’s Golden Age (such as Rita Hayworth). But with contemporary cosmetics, color pigments are stronger and more high-tech than ever, which makes for lip color that stays on longer and looks even more striking.

Who wore it well: Eye-catching reds in recent red carpet history include the gorgeous Adele on Oscars night, French beauty Marion Cotillard at the BAFTAs last month, everyone’s current girl crush Jennifer Lawrence at the 2013 SAG Awards, and the always stunning Rihanna at the Grammy Awards. 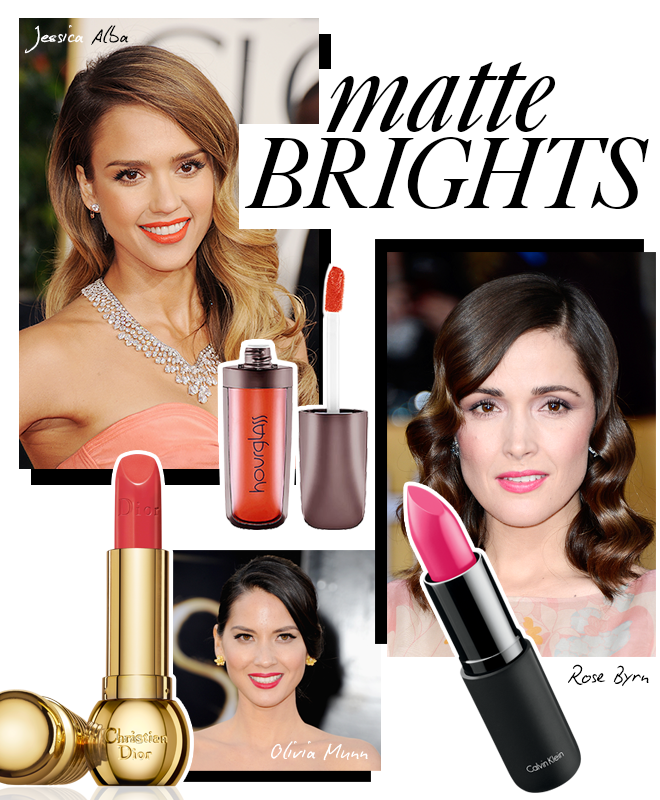 Bright colors have made a big comeback, but these vivid shades tone it down by pairing intense color with a modern semi-matte texture. We’re crushing hard on the look worn by Olivia Munn on the Academy Awards red carpet. Her makeup artist used the haute couture of lip color, Dior’s Diorific lipstick ($36, dior.com), in Ange Bleu, a deep ruby red that perfectly complemented Munn’s Marchesa gown. “We applied the color and let it sink in for a while, then wiped it off so it was more of a stain.”

Who wore it well: The aforementioned Olivia Munn at the Oscars; Jessica Alba in vivid tangerine at the Golden Globes; Anne Hathaway in a vibrant and playful pink shade at the BAFTAs. We also love the bold bright lip colors worn by rapper and reality show judge Nicki Minaj almost any time she’s on a red carpet!

Get the look: At this year’s Golden Globes, Jessica Alba rocked an orange lip so bright it was almost neon. “The dress was the inspiration,” says makeup artist Lauren Andersen. “I loved the contrast between her glowing skin and the matte orange lip. It’s an almost tropical pop of color that’s not an exact match for the dress but close.” On Alba that night, Anderson used Hourglass Opaque Rouge Liquid Lipstick in Riviera ($28, sephora.com), a velvety matte color that delivers richly pigmented and long-lasting coverage for up to 14 hours.

Rose Byrne rocked another version of the trend in intense pink on the SAG Awards red carpet. “For a pop of color we used the CK One Pure Color Lipstick in Wow [$16, ulta.com], a stunning bright pink shade. I skipped using lip liner so the lips looked soft on the edges,” says Hung Vanngo, CK One Color global make up artist. 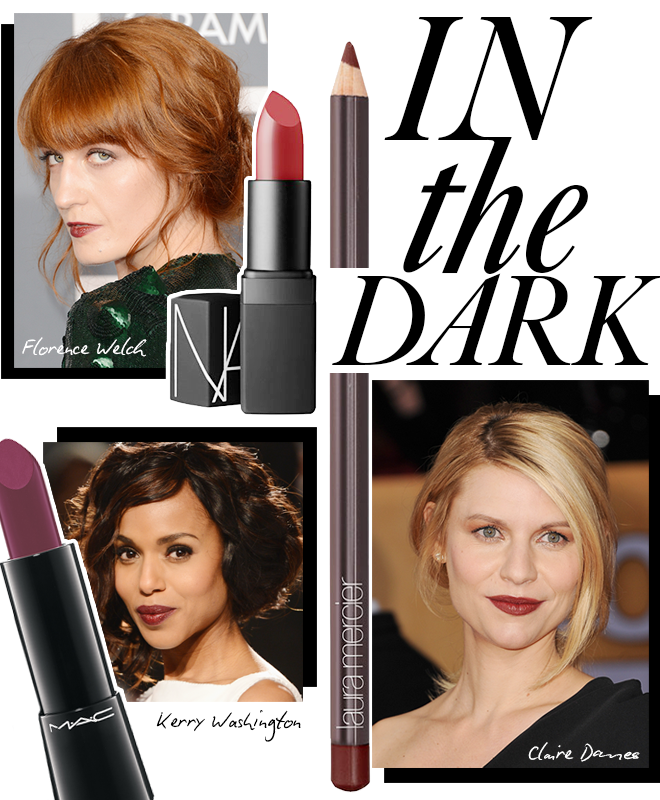 Done wrong, a dark lip can land a starlet on the “worsts” list. But when done right, we’re loving the sultry seduction of ultra deep lip colors in purple and brown hues. Burgundy reds, deep plums and dark chocolate browns on lips offer easy evening glamour for the post-Twilight generation.

Who wore it well: Clare Danes at the 2013 SAG Awards; Florence Welch at the Grammy Awards; and Kerry Washington on the red carpet at the UK premiere of Academy Award-winning Django Unchained. 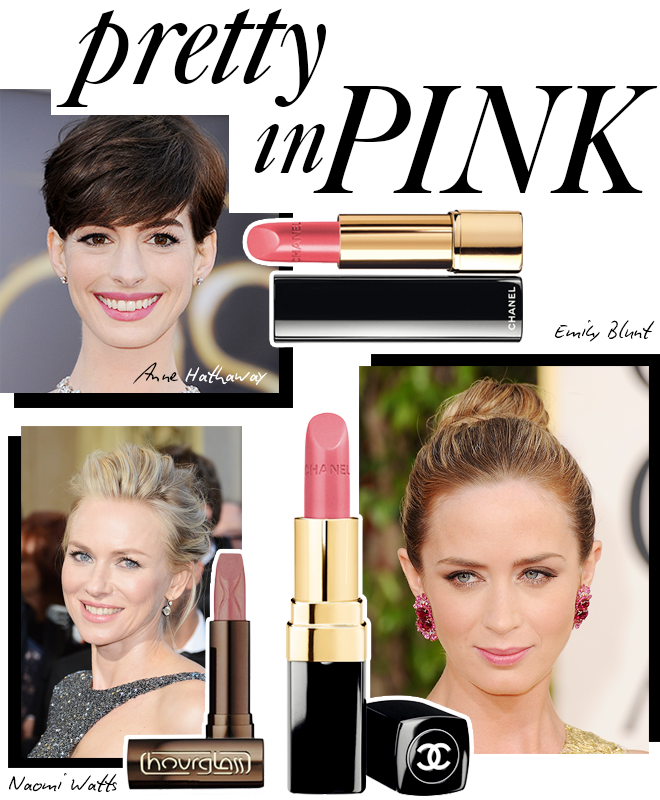 A delicate pale pink lip was a perfect pairing with the heavily embellished haute couture dresses that A-listers had flown in almost directly from the Paris runways for the awards season night of nights — The Oscars. A naturally rosy pink lip doesn’t distract from such intricate, highly detailed gowns, and is just impossibly, almost perfectly pretty.

Who wore it well: Amanda Seyfried, Anne Hathaway, Reese Witherspoon, Naomi Watts, and Zoe Saldana at the 2013 Oscars, Marion Cotillard at the 2013 Golden Globes; Adele and Allison Williams at the 2013 Grammy Awards.

Get the look: For the Les Misérables star who made a virtual clean sweep of the Supporting Actress category this awards season, Chanel celebrity makeup artist Kate Lee was inspired by the delicate pink shade of the Anne’s controversial dress. “I wanted to avoid matching the lips to the dress,” explains Lee. “So I chose a shade slightly more intense and then blended it down ‘til I got just the right shade. The lip color was Chanel Rouge Allure Luminous Intense Lip Colour in Seduisante [$34, chanel.com] with just a dab of concealer mixed in to make it one shade lighter.”

Also at the Oscars, Naomi Watts wore a pale pink that made a more interesting (and if you ask us, more flattering) alternative to that night’s many nudes. Celebrity Makeup Artist Pati Dubroff says, “For a soft rose lip that mimics Naomi’s lip color, I used Chanel Rouge Coco Hydrating Creme Lip Colour in Mademoiselle [$34, chanel.com].”

Read more: See The Most Amazing Nails From Awards Season