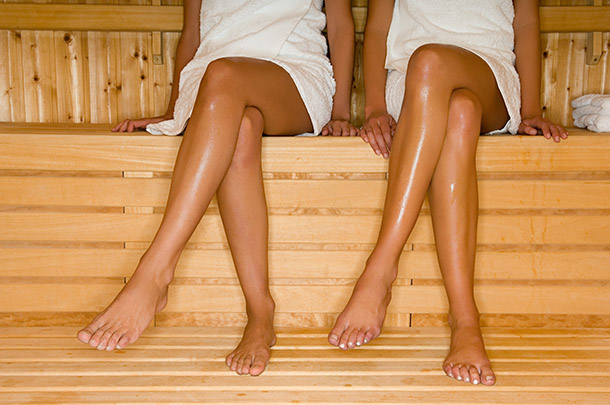 Everyone loves a good spa day. From a half hour in a sauna to a long soak in a floatation pool, spa treatments are the ultimate in not only indulgence and relaxation, but beautifying, too. We don’t mean to spook you, but we do feel it’s our duty to make you aware: Like most things in life, the spa treatments we so love have some downsides, too. The potential health risks of these five popular treatments aren’t pretty by any means, but what can we do? Reality bites… and so do fish pedicures.

Saunas
Burns, respiratory distress, a compromised reproductive system, dehydration—saunas are by and large considered safe by most standards, but spending too much time in them, or hanging out in a sauna that’s too hot, has health risks that without a doubt outweigh the benefits. You can imagine how exposure to crazy hot temperatures in any environment can become very dangerous very quickly, but those with underlying heart conditions are particularly at risk given that the heat from saunas cause the blood vessels to dilate. Furthermore, when combined with the effects of alcohol on your body, saunas can increase the likelihood of heart problems and even death. Word to the wise: “sweating out” a hangover in a sauna is nothing more than a myth, and it can be really dangerous.

Communal Baths
Some spa treatments, like public whirlpool and soaking baths, involve hot water, which is a breeding ground for bacteria and other harmful organisms. Rather than change the water entirely, many spas and baths choose to treat these communal areas with chlorine, which doesn’t always get the job done. Cuts, sunburns, and skin irritations like eczema and psoriasis can leave the skin not only more susceptible to catching whatever’s in the water, but more likely to transmit those same germs, too. It’s basically an invitation to both catch and spread germs.

Seaweed Wraps
Overheating is a definite concern when it comes to many spa treatments, including seaweed wraps. Using heat to encourage perspiration in this way can put stress on the cardiovascular system and increase your risk of dehydration. In the case of seaweed wraps in particular, the iodine from the seaweed is absorbed into the body, which can disrupt the function of the thyroid. Pregnant women should avoid seaweed wraps entirely, as even minor dehydration can not only cause a dearth of necessary vitamins, but also trigger uterine contractions.

Lasers
It goes without saying that the possible negative effects of using a laser on your skin should come as no surprise, but it’s important to be aware of them all the same. Both laser hair removal and laser resurfacing treatments come with their own set of risks, but burning and blistering are distinct possibilities. Resurfacing treatments are arguably the riskier of the two: Scarring and hyper- and hypo- pigmentation are relatively common, and the sore, raw skin left behind post-treatment puts you at a higher risk for infection. Keep in mind that most laser treatments are pretty safe, but it’s wildly important to choose a good doctor and establishment to perform these procedures.

Fish Pedicures
A fish pedicure isn’t exactly something we treat ourselves to on a regular basis, but if you’ve been considering getting one on vacation or as an indulgence, you should definitely know the facts. While fairly harmless, certain individuals can be put at more risk than others: Anyone with sores or open wounds, diabetes, or a compromised immune system like from AIDS or cancer should avoid the treatment entirely due to an increased risk of infection. There’s no way to disinfect or sanitize the fish between treatments, which means that nail salons are most likely to use the same fish for multiple customers, so bacteria from another person’s feet can easily be passed on to yours after the fish consume it.

Read more from Daily Makeover: The 10 Best Wellness Spas from Around the World