Unexpected details made for an interesting mix of hair and makeup looks backstage at Erin Fetherston.

MAC lead makeup artist Lucia Pica conjured up a look that was a “Newton woman in soft-focus.” She put a strong emphasis on the eye using an elongated shape and smoky, blended shadows. First she applied a dark brown cream liner all around and outside of the eye. She smudged a dark brown shadow on top of the liner to fix it in place and add more smokiness. 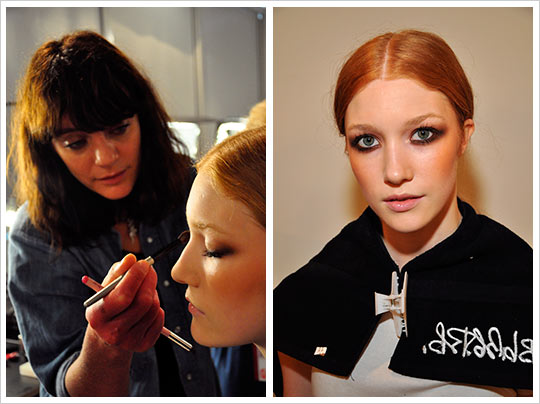 Pica at work on a model and the finished product.
Photo: Nathan Bush

Next she took the orangey-brown Cork Eye Shadow and blended it around the dark brown to create a soft aura of brighter color haloing the deep shadow. She finished up by lining the lower inner rim with Eye Kohl in Teddy and then layering Eye Pencil in Coffee over top.

All of the models were on the pale side, so Pica worked to enhance the porcelain look of their skin with a very fair foundation. She then used a blend of cream blushes in orange and light taupe and applied it very high on the cheekbones. She wanted the blush to blend into the skin so that the bold color wasn’t the main focus, but instead merely helped accentuate the eye. Lips were kept bare with a lip balm, but Pica used concealer on the lip edges to blur the lip lines and enhance that hazy, soft focus feel. 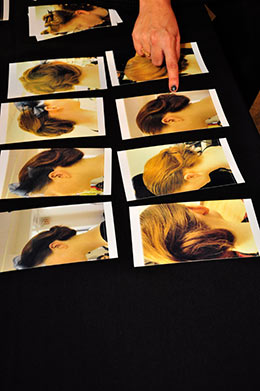 Hair was equally as conceptual with Bumble and bumble lead stylist Lyndell Mansfield creating an architectural style that looked more complicated than it actually was to produce.

Mansfield said she knew the minute she saw the clothes that models hair had to be up — “We needed the elegance of a long neck,” — but didn’t want to do a traditional updo, which she felt was too stiff and ladyish for Erin’s girl. “There’s a structure but there’s also a looseness to this look,” she said.

She started by spraying hair with Thickening Hairspray and blow-drying model’s hair, creating a bit of curl on the ends. The desired texture after the blow-out was for the models’ hair to be”fluffy.”

Next she pulled hair back as if she was going to put it into a ponytail and took a generous amount of Bb.Gel and applied it to the roots of the hair in the front section only — from the top of one ear to the top of the other ear — and combed it through and all around the hairline, shaping hair into a deep side part. The gel created a slick, wet effect throughout the front of the head, leaving the rest of the hair fluffy. Mansfield said she kept the top portion of hair flat because most of the models would be wearing either a headband or a hat, so the real point of interest needed to be the back of the head. 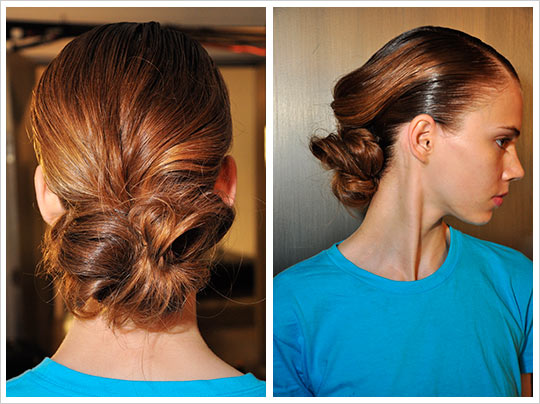 She then scraped the sides back and put pins in behind each ear to anchor. The left over hair in back was divided into two sections and each was rolled underneath, almost as if creating a classic chignon, then mashed up in Mansfield’s hand. She took one side and pinned it loosely at the back of the head, then took the other side and tucked it loosely over and around the first bun, then pinned in place.

Since the front, slicked back portion of hair wasn’t pinned up, it fell back and cascaded over the bun like a curtain. Just before models hit the runway, each had the top and side sections of hair spritzed with Bb.Shine to further enhance the wet look.