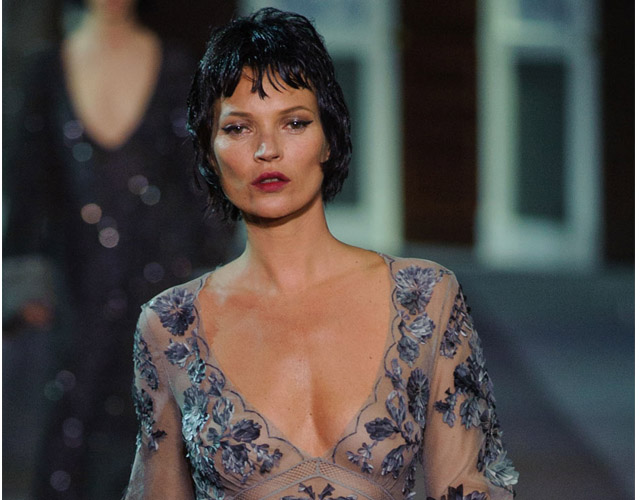 This morning, bright and early in Paris, Marc Jacobs debuted a decadent Fall 2013 Louis Vuitton show, that instead of being set in one certain era was set in a mix of many, but was inspired overall by a variety of women and the fun that has been had staying in – in hotel rooms to be exact. With the runway created to appear like a hotel, models stepped out from faux corridors wearing a variety of chemise dresses, slips and even men’s coats that Jacobs turned into bathrobes. But what seemed to of course cause the most chatter was the fact that Kate Moss, an old friend of Jacobs’, closed the show (which has almost become a tradition over the past few seasons), showing off a gorgeous chemise and perfectly contoured cheekbones.

Legendary makeup artist Pat McGrath created the look for the show, choosing a berry lip stain to complement the sleek, rocker vibe that the matching wigs that each model was wearing gave off. The grunge of the wigs was nicely complemented by a “sheen” on the eyes, which McGrath achieved by using a high-impact silver shadow to contrast with the flick of winged black liner.

What do you think of the complete look? Are you happy to see Moss still walking the runways?