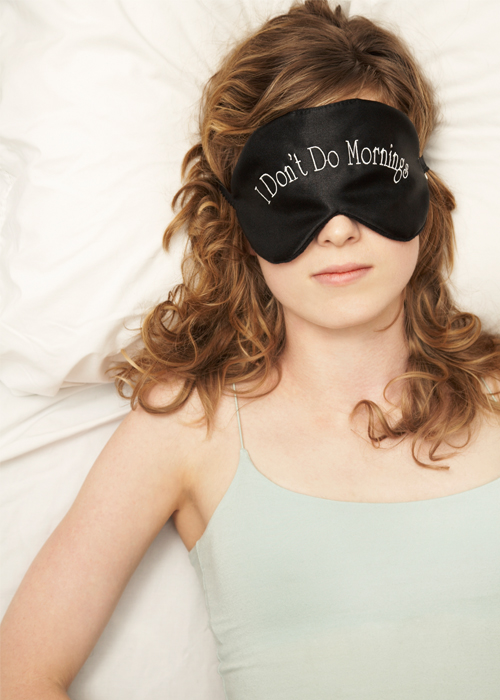 We may not be able to make up for lost time in life, but it turns out that we can make up for lost sleep. Sleep debt—yes, that’s a technical term—is accrued by the best of us, and just like our credit cards, the more we rack up, the more we wind up paying for it in the long run. Decidedly unlike credit card debt, however, sleep debt can lead to serious health consequences like diabetes, heart disease, and (as anyone who’s ever pulled a few consecutive all-nighters will already know) memory loss.

Research suggests that for “optimum health and function,” the average adult should shoot for seven to nine hours of sleep per night. Unsurprisingly, that doesn’t quite happen for an overwhelming majority of women, meaning that many among us are walking around with outstanding sleep debt without even being aware of it. Irritability and fatigue, the most common signs of sleep debt, have become ordinary traits of the hard-working, busy-all-the-time set, when they should be perceived as symptoms of something being wrong.

Even if you miss a measly hour a night, it turns out those 60 minutes really add up: Researchers followed a select group of volunteers who scored just four hours of sleep a night for six consecutive days. In that period alone, the volunteers developed higher blood pressure and higher levels of the stress hormone cortisol, while also displaying signs of insulin resistance, a precursor of diabetes and metabolic dysfunction.

The good news? All of the negative traits the volunteers experienced were reversed when they—you guessed it—caught up on their sleep, thus ridding themselves of their sleep debt.

Considering the evidence, Dr. Lawrence J. Epstein, regional medical director of the Harvard-affiliated Sleep Health Centers, rightly warns against treating sleep as “an indulgence or luxury,” instead regarding it as the legitimate physical need that it is.

The good news is that there are simple, tactical ways to catch up on all that lost sleep. Rather than setting an arbitrary goal or constantly thinking “I should really get more sleep,” it turns out there’s a science to paying back that sleep debt (and getting some well-deserved rest). Epstein advises that we “settle short-term debt” while we have the chance. Say you miss 10 hours of sleep over the course of one week—Dr. Epstein says that you can repay that debt by sleeping three to four extra hours on the weekend and an extra hour or two every night the following week.

If you’re addressing a longer-term sleep debt? Plan a vacation with very few obligations. (Music to our ears!) Shut off that shrill alarm clock and sleep every night until you awake naturally.

Now, knowing how to catch up on lost sleep doesn’t necessarily mean that sleep debt is okay—experts say it’s best not to lose those hours in the first place. If you’re someone who really struggles to get the suggested minimum sleep hours, try using that alarm-free vacation to determine how much sleep you actually need—everyone’s different!—and then factor that schedule into your daily life. As boring as it may be, going to bed and getting up at the same time each day really is the best approach … for the weekdays, at least. We’ll go ahead and say that it’s scientifically proven that weekends are fair game.

Read more: How to Get More Beautiful Skin While You Sleep