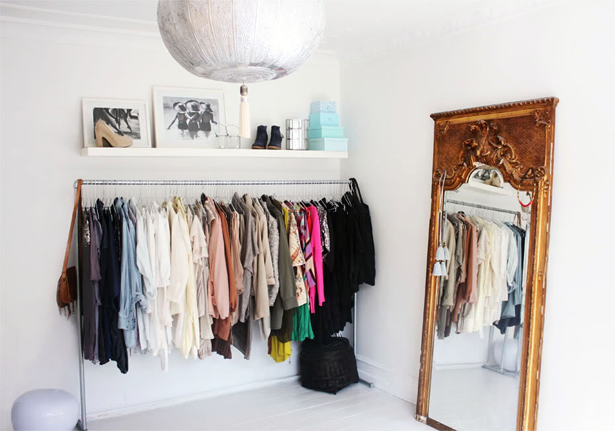 What if this mirror made you look 10 pounds thinner? Would you buy it? (Photo: The Cherry Blossom Girl)

UPDATE: In 2013, we reported that Belinda Jasmine, the founder of The Skinny Mirror, was aiming to get her slimming mirrors into women’s home. Now, Business Insider is reporting that Jasmine is in talks with a popular apparel chain that has more than 450 stores worldwide, though she asked that the name of the retailer be withheld, as negotiations are still underway.

Jasmine says that if her curved mirrors do end up in big stores—it’s apparently already in some small boutiques—it won’t be with the intention to dupe you. The Skinny Mirror logo is visible on every product.

From July 2013:
There’s not a woman among us who hasn’t had some sort of experience with the double-edged sword known as the “skinny mirror.” You know, that certain type of highly-skewed reflective device that makes you appear about 10 pounds lighter and maybe even a little taller, too.

While many women might find the idea of looking falsely fabulous depressing, it seems that others are so enamored by their faux-svelte selves that they’re shelling out anywhere from $160 to $600 to install their own intentional skinny mirrors.

According to the Daily Mail, graphic designer and entrepreneur Belinda Jasmine founded a company called The Skinny Mirror, which sells full-length mirrors that use curved glass technology to make women appear thinner. The idea  was born after Jasmine—despite being an avid surfer and health enthusiast—became fed up with feeling like she didn’t look good in clothes because she thought she had a “fat mirror.”

Although she knew it was the mirror that made her look bigger, she still found herself believing she was larger then she actually was, which prompted her to create mirrors that show women a slimmer version of themselves.

MORE: 10 Celebrities Who Looked Better Before They Got Super-Skinny

“I used The Skinny Mirror prototype for weeks before I committed to do start The Skinny Mirror company,” Jasmine writes on the company’s website. “Over time, I felt how it affected my self-image. I stood up taller, felt sexier, and wanted to dress cuter. It was important for me to make this available to individuals so that they too might have an improved body image.”

While it make sense that women would embrace things that make us feel more confident (and—for better or worse—most of us probably will like the way we look in The Skinny Mirror), it’s hard to ignore the fact that what we’re looking at isn’t real, a pretty big caveat in our book.

However, Jasmine believes that seeing ourselves in skinny mirrors will have long-term postive effects on our confidence, as our self-image is directly tied to our energy levels, feelings of competence and perceived attractiveness.

“It’s the same feeling you get when someone tells you, ‘You look nice today,'” she said.

Whether The Skinny Mirror catches on a major way remains to be seen, but women are smart creatures and most of us probably won’t want to rely on trickery to achieve “better” versions of ourselves.