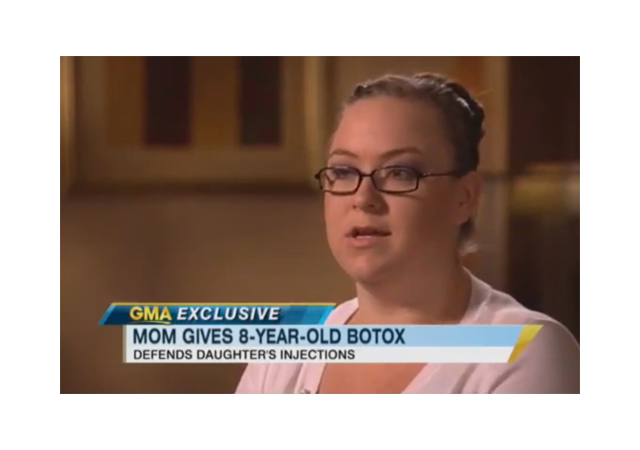 I realize that we’ve almost beat this “Botox Mom” story into the ground, but it’s kind of like watching a car crash in a sick and twisted way. You know, you’re running to go help (or frantically calling for help) and it’s so horrible that you can’t stop watching.

Anyway, the latest event in Britney’s world (the poor 8-year-old who was given Botox to help her excel in the pageant world) is that her mom, Kerry Campbell, is now suddenly feeling remorse. I mean, now? Finally? It took her daughter being taken away from her to feel bad? Campbell spoke to The Sun about the whole ordeal saying, “I cannot put into words the remorse I feel. I am going to seek therapy for my obsession with looks so I will no longer push my insecurities about appearance on to her…I will not use Botox on her ever again. I honestly felt I was helping her. I regret doing it and remain committed to being a good mother and being reunited with my daughter.”

She also added that she probably deserves all of the hate that she has received since the news broke, and restated that, “I want to take this opportunity to apologize to the world for my mistake. I vow never to give her Botox again.”

Campbell’s tune has certainly changed from when the story first broke, when she stood by her decision simply stating that the other pageant moms were doing it, so she needed to also. Seems a bit fishy to me. What do you think?