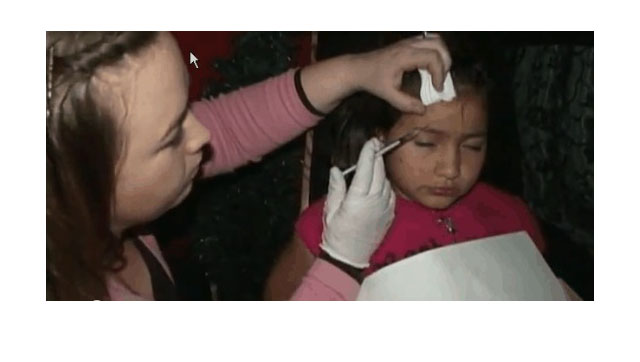 Alright, not that I really want to be paying this Kerry Campbell/Sheena Upton any more attention than she’s already gotten, this story is just never-ending. It’s like watching Heidi Montag get 10,000 plastic surgery procedures and then spiral downhill and decide that she shouldn’t have gotten them – blah, blah, blah but you can’t turn away.

After yesterday’s strangely shocking update that the whole thing was a hoax so that Upton could earn a measly $200 from The Sun, TMZ has since posted a video with Upton claiming that she was simply “acting” and she has “proof” and that she (this is the kicker folks) doesn’t even know what Botox is.

But now, Good Morning America is clearly fighting back, and investigating the pair in their own right. Since, they seemed to have been fooled, and Upton is sort of going around and saying that GMA paid her as well and she just simply read off a script on that show. So, GMA got ahold of The Sun journalist who did the original story, Alley Einstein, and found out that the journalist still claims that she saw the mother inject Britney with something and that the child did appear to be in pain. She also saw identification that the mom’s name was Kerry Campbell. GMA went further still, and tracked down family members who swore up and down that they’ve witnessed Britney receiving injections (we’re guessing this family is not close).

Further still, GMA also spoke to a physician to dispute the findings of Upton’s UCLA examination of Britney, which showed that she had never received Botox treatments. According to the original story, Upton had said she hadn’t given Britney Botox in three months – the GMA physician said that this could mean that the Botox could have conceivably worn off, which would prove medical results inconclusive.

TMZ also recently reported that child welfare released Britney back into the care of Upton but now with all of this recent GMA news, we’re not sure who to believe, and unfortunately we’re going to have to keep an eye on it. All we know is that this woman needs some help.