Simone Biles is the pint-sized miracle that’s already won a whopping five Olympic medals at just 20-years-old. She’s also impossibly friendly and a joy to watch whenever she’s in front of a camera. But it just wouldn’t be 2017 if Twitter trolls weren’t completely side-stepping those accomplishments to comment on her hair. *Insert eye roll*

Earlier this week, Biles was named an honorary cheerleader by the Houston Texans and decided to share her excitement on Twitter with a series of photos. In one, captioned “can’t wait to cheer at my first game,” her hair is blown out and slightly tousled. Seems totally normal, right? Well, according to one tweeter who clearly has way too much time on her hands, Biles “needs some black friends” and a lacefront wig so we don’t have to “worry about that extraness.”

And because the Internet loves to pay unnecessary attention to negative comments, this one in particular garnered tens of thousands of retweets, even after Biles jokingly said that she “just came from a 4 hour practice w/my hair in a bun, excuse my hair.” The point here is that she shouldn’t have to “excuse” her hair in the first place, especially when she just got done with jumping up and down for hours.

Nonetheless, she offered a classy clapback to anyone who has something to say about her appearance: “I have 1 question to everyone commenting about my hair when I genuinely look happy in the photo. Do you look perfect ALL the time? Everything in perfect order?” To that we offer a standing ovation.

MORE: Curly Girls, These 50 Natural Hairstyles Are For You 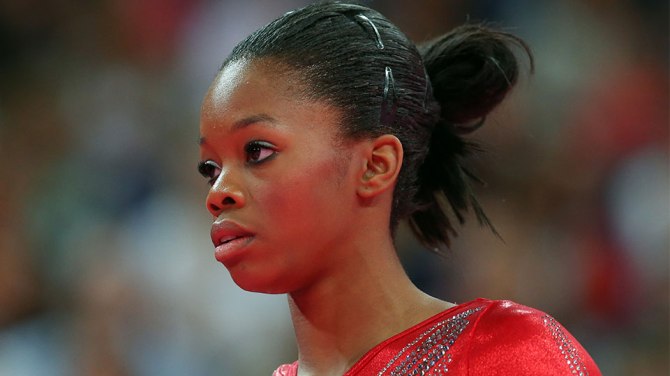 As Refinery29 pointed out, this is eerily familiar to the same criticism Gabby Douglas experienced at the 2012 and 2016 Olympics when she decided to wear her hair in a messy bun while competing. “What’s wrong with my hair? I’m like, I just made history and people are focused on my hair? It can be bald or short; it doesn’t matter about [my] hair,” she told the Associated Press. “Nothing is going to change. I’m going to wear my hair like this during beam and bar finals. You might as well stop talking about it.”

The policing of black hair has long been rooted in this idea that textured hair is somehow “inappropriate,” “unprofessional” or unclean. So much so, that both white people and women of color have perpetuated this idea for generations, making it difficult to move past, even in a time as “progressive” as the New Millennium. Clearly, we’ve got a long way to go. Keep doing you, Simone; you and your hair are amazing!