Nineteen-year-old Louisiana State University freshman Sha’Carri Richardson is blowing up fast, with extra emphasis on fast. Why? In June, the student-athlete set a collegiate world record when she ran the 100-meter dash in just 10.75 seconds and was immediately thrust into the national spotlight. Richardson subsequently announced that she was entering the world of professional athletics and that she had signed with Nike, ‘cause checks over stripes.

On June 12th she wrote, “I would like to take this moment to thank the LSU track & field [team] for everything they have [helped] with through my journey this year,…I would like to announce that I have decided to pursue my life long dream and become a professional athlete.” There’s absolutely no doubt that ShaCarri’s refined talent made her a star. Her skill has people all over the internet hailing her as the next Flo Jo and one of the fastest women in the world. But her beauty techniques were also a cornerstone in discussions, too because the young starlet has a style all her own. 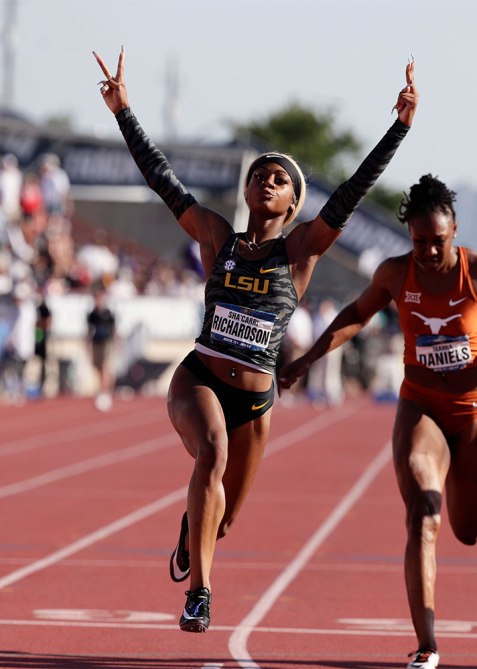 During her record-shattering run, Sha’Carri whizzed past the finish line with outstretched arms, fingertips accented with sharp, white acrylic nails. Commentators were awed by her performance, as was everyone else. The run was focused and executed by someone who had spent over a decade preparing for the moment. I was also paying attention to her platinum blonde ponytail that trailed behind her during the race, and her multiple tattoos, which were once taboo markings, especially in the professional realm.

But things are changing and the world is becoming increasingly accepting of individuality, even though there’s always a hater or two lurking in the shadows. Richardson’s love for running, coupled with her passion for style reminds people, herself included, of late Olympic track star Florence Griffith Joyner. In an Instagram post dedicated to Joyner, Richardson wrote, “Y’all love talking about my hair & my nails like the greatest woman to ever enter the game didn’t run in style,”. She posted snaps of some of the track legend with her multi inch-long nails.

Florence Joyner, or “Flo Jo” to fans, did her own hair, nails, and makeup when she ran along tracks in the 1980s. Contrary to popular belief, her nails were sometimes natural, but the extreme length and designs have inspired people for over 30 years. When profiled for NAILS Magazine in 1993, she revealed that she started doing her own nails as a teen and worked in a hair/nail salon in the early days of her career. For the 1988 Olympics, where she ran the still-standing 100m and 200m world records (in 10.49 seconds and 21.34 seconds, respectively), she designed a set of red, white, blue, and gold nails that are still celebrated today. 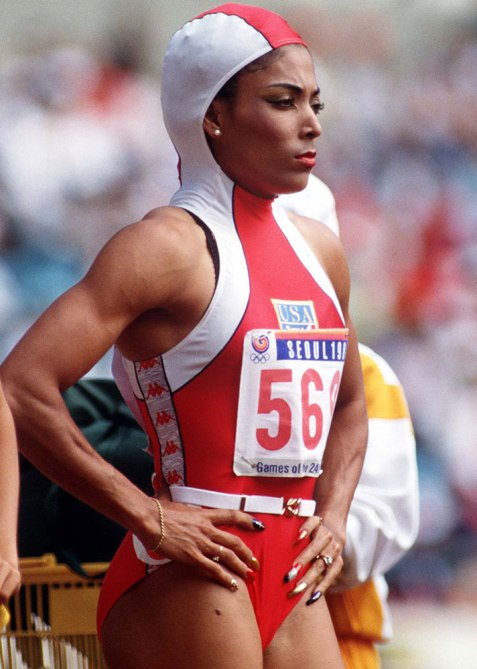 In 2012, sculpturist Pamela Council immortalized the set with “Flo Jo World Record Nails”, a to-scale sculpture of a 200m track made out of acrylics that were all painted to replicate the nails Flo Jo stunned the world with. When Flo Jo passed away in 1988, her style was analyzed by the Chicago Tribune, with commentary from Valerie Cassel. Cassel, who now serves as the senior curator of modern and contemporary at The Virginia Museum of Fine Arts, said, “it had mass appeal because this style was rooted in the African-American tradition and she took it to the field. She was the Patti LaBelle of athletes. It just goes to show that this aesthetic was so solidly ingrained. It’s not an aesthetic we all subscribe to, but as a community, it’s a shared language.”

Whenever I speak with Black people who were of age during the ‘88 Seoul games, they are generally still enamored by the magic Flo Jo possessed and her willingness to represent our culture in front of the world.

Three-time Olympic gold medalist Gail Devers ran with elongated nails too, only hers were always natural. Apparently, Devers was a nail biter as a child, and her dad got her to start growing her nails out in an attempt to get her to stop. It worked and then some; at 26-years-old, she won her first gold medal (for the 100m) at the Olympics with medium length red nails. Her performance was instantly astounding. She had spent the past few years battling Graves’ disease, receiving radiation treatment and had nearly had her feet amputated. Devers won the same honor again, four years later in Atlanta, only this time, her nails were stronger (after having been weakened by the thyroid disease) and golden. 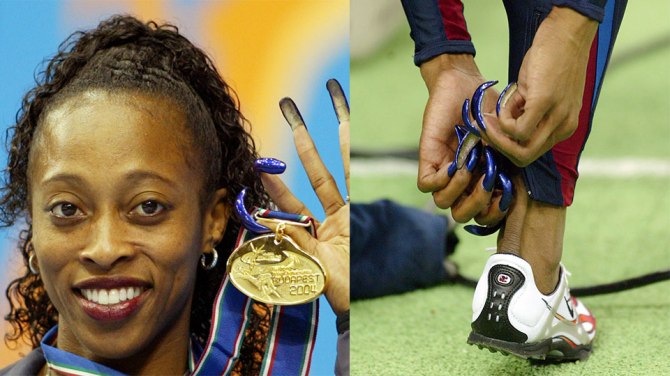 She also won a gold medal as a member of the United States’ 4 x 100 m relay team. Electric blue was her hue of choice at the 2000 Olympics, and again in 2004. The medalist’s hairstyle was typically natural curls pulled away from her face into a sleek ponytail. Some of the best photos of Devers show her holding a medal, with her spiraling nails and broad, perfect smile.

Indiana’s Ashley Spencer also makes it her business to slay on the track. She won bronze in the 2016 Olympics for her 400m speed, and like Sha’Carri, is a Nike athlete. Spencer competed in nearly iridescent, pink, pointed nails, which according to photographer Loreal Curtis, got a good bit of screen time during the Rio games. She inspires her nearly 30,000 Instagram followers with pictures and clips of her in form.

Wig colorist Cynthia Lumzy handles her rainbow tresses, My Favorite Comb has the braids on lock, tattoo artist Amani Tre Niner is behind her ink, and Caitlin Funk is Spencer’s nail technician. Late last year, Ashley silenced everyone who questioned how she managed to get things done with her nails when she posted a video of her lifting, with her signature claws.

Female athletes, especially Black women, are critiqued harshly for a number of reasons. Their bodies are “too defined” or their uniforms break the rules. The issues don’t always have logical backstories, and they often stifle creativity and the needs of women in sports. When women choose to innovate, regardless of the conversations they know will swirl around their looks, they align themselves with heroes. They send a message that it’s possible to perform on your own terms.

Additionally, when these athletes like Sha’Carri, Flo Jo, Gail, and Ashley decide to add their own personal style, it is imperative to discuss their achievements, as well as their beauty methods. Only touching on beauty, without crediting athletes for their work reduces them and essentially ignores all of their hard work. You gotta speak on the glam and the glory, always.