If you’ve been wanting to go shorter for spring, this hair transformation might be the inspiration you need. We’re talking about Sarah Hyland’s shag bob haircut, which she just debuted over the weekend. You might have seen her shorter ‘do early last week but, according to her hairstylists at Nine Zero One Salon in Los Angeles, it was a bit of a fake-out since she just had her hair extensions removed. (She wears them while playing Haley Dunphy on the long-running comedy Modern Family.) Hyland’s real new hair has a ’70s feel to it thanks to shaggy layers and side-swept bangs.

Lee says that after styling Hyland’s shag, she sprayed her hair with In Common Magic Myst Universal Elixer, a product from Lee’s own salon line co-founded with business partner Riawna Capri. It’s a multi-functional spray with vitamin B3 (niacinamide) to nourish the scalp, rose extract to tame frizz, lavender extract to smooth hair cuticles and orange fruit extract to give hair natural-looking body and shine. 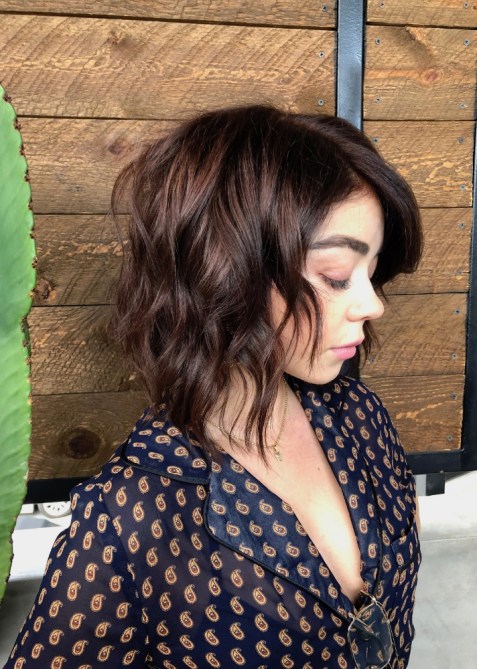 Hyland showed off her hair on Instagram with the caption, “New hair. Who dis?” She also spoke about getting her “roots done” on her Instagram Stories, while at the same time posting an update about her health. She had to check into a hospital last week thanks to a rough bout of pink eye and a respiratory infection, but is happy and home busy celebrating National Puppy Day with her adorable dogs and boyfriend, Wells Adams.