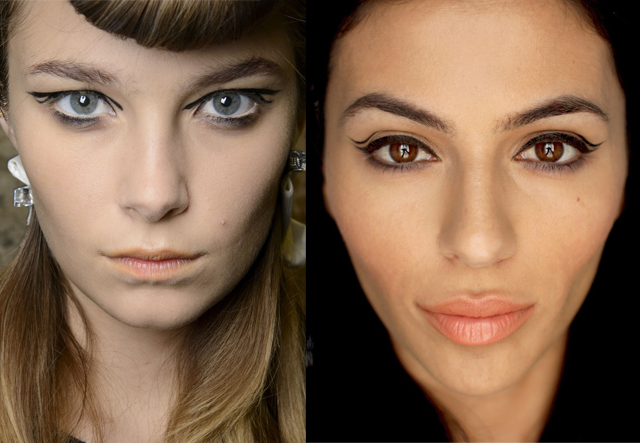 Throughout fashion week we’ve teamed up with blogger Miss Maven to test out the looks we’re seeing on the runway and find out if from what we’ve learned from the pros backstage, we can do them ourselves, and still look like “real” people. Follow along as Teni Panosian tries out a few of our favorite (or most unexpected) looks, and teaches you how to take it from the runway to the real way.

I’m so glad the models at Hache were rockin’ the multiple liner trend. Though it was a spring/summer 2014 show, the double liner is so perfect for the fall. It’s dramatic and bold, and you can get as creative as you’d like! Here’s my wearable version of this look.

I wanted to start with neutral lids, but instead of eyeshadow I opted for my Fresh Face Luster in Sandy Lane . (I want the focus completely on the liner for this look!) I covered my lids with the powder, then I grabbed my Eyeko Liquid Metal Eyeliner in Black Onyx. I lined my bottom lid like I would for any winged liner look, but instead of leaving it as-is, I I added another line just about halfway across my crease, following the curve. I created a little flick at the end parallel to the winged liner on my lash line. To create that fade effect, I took some more of my Fresh Face Luster and, with a small brush, began blending out the line toward the inner corners of my eyes. 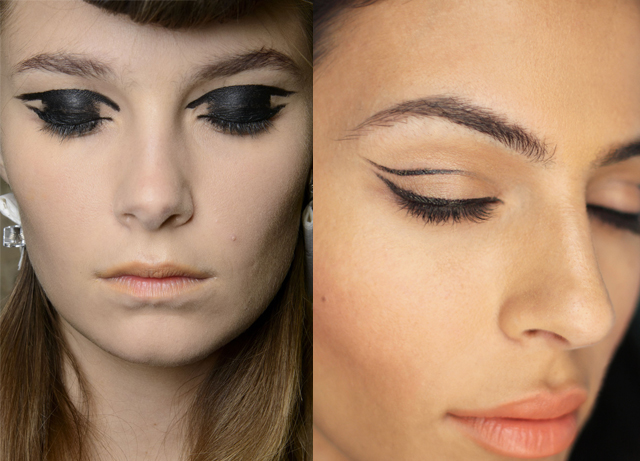 The model from the show is wearing an orange liner, so I followed the same color scheme and applied Mandarin by MAC for creamsicle-esque lips! It’s the perfect soft orange to complement this look and still keep the focus on that liner.

More From Beauty High:
Runway to Real Way: Miss Maven Tests Out the Look from Rebecca Minkoff Spring 2014
All the Details on the Foil, Pom-Pom Nails at Libertine Spring 2014
Trendspotting: Matte Lips for Spring 2014