If there’s one woman on the planet you really, really don’t want to get on the wrong side of, it’s UFC champ and Olympic bronze medalist Ronda Rousey. Famous for taking down her opponents in just seconds, the formerly undefeated California native has been on hiatus after receiving a (very public) pummeling from Holly Holm last November in Australia.

MORE: 27 Diet Secrets from the World’s Most Beautiful Women

And if you’ve been wondering what she’s been up to since she’s been out of the ring, there’s been a handful of magazine shoots and fashion campaigns, a strict training routine, and, she tells us, a few good books and an ongoing obsession with World of Warcraft (yep, really!).

In January, Rousey appeared on the cover of Sports Illustrated, and then followed that up with a buzzy initiative for Reebok, “NeverPerfect,” plus a new denim campaign for Buffalo earlier this month. Her training routine has hardly slowed since last November, though—Rousey says that an average week includes anywhere from six to 12 (!) workouts and a strict, superfood-packed diet of chia, spinach, avocado, and lean turkey for protein.

MORE: 30 Instagram Accounts That Are the Definition of #Fitspo

The athlete also gave a little insight into the workout tracks she’s listening to at the gym, her healthy snack ideas, the only health blog she follows, and the exact diet plan she’s sticking to right now. Keep scrolling for details on all of that and more.

For breakfast I had:
I follow the Dolce Diet, and for breakfast I start the day off at 7:30am with a Dolce chia bowl. That’s two tablespoons of chia, hemp, and oats, add agave nectar, cinnamon, a couple blueberries, and a tablespoon of almond butter. My diet is about maximizing my nutrient intake instead of minimizing calories, and that keeps my metabolism burning fast.

For lunch I had:
Usually when we’re in camp, I’ll have some kind of egg scramble with a bunch of vegetables cut up at 12pm—mushrooms, peppers, spinach, avocado, tomato—with turkey bacon, one slice of Ezekiel bread, Kerrygold butter, and cinnamon.

For dinner I had:
Turkey chili at 7pm, which I made using four ounces of turkey, chopped-up asparagus, red pepper, red onion, tomato, beans, chili spices, and cayenne pepper.

My go-to snack is:
Honeycrisp apples with cashews, or red grapes with nuts. I snack when I get hungry between training and throughout the day.

My all-time favorite workout is:
My favorite workout is hitting mitts. My coach puts mitts on his hands, and my hands are in gloves. He holds different postures or targets for me to hit with knees, elbows, and punches in an order and sequence he thinks will teach me timing and accuracy, while challenging my stability and balance. I train at Glendale Fighting Club.

My go-to smoothie recipe is:
I make a Dolce Power Shake blended with fruit and vegetables—no protein powders or anything. I do this after every morning and evening training.

I start my mornings with:
Coffee.

My average week of working out includes:
Usually judo, striking, wrestling, Brazilian jiu-jitsu, conditioning, and swimming six to 12 times a week, depending on where I am in my training cycle. The boxing workout consists of sparring, back work, mitt work, and shadow boxing. My strength workout is a lot of core-work exercises, and judo, wrestling, and jiu jitsu is drilling and open sparring.

Right now I’m working on:
I’m working on launching the Hope denim collection with Buffalo, as well as training, making a compost in my backyard, leveling up on [World of Warcraft], and reading This Book is Full of Spiders, the sequel to John Dies at the End.

The wellness blogs I follow include:
I follow my mom’s blog—mostly when she mentions a blog she wrote and I want to see what she’s referring to. I don’t really follow any websites right now except World of Warcraft advice websites!

The fitness app I use most is:
We have a big boxing timer on the wall that I check in with, so I don’t use any health or timer apps for training. If you want one, iTunes has a bunch like Boxing Timer Pro.

My workout playlist right now is filled with:
We listen to Hector Lavoe a lot during training. “El Dia De Mi Suerte” is my favorite song of his. 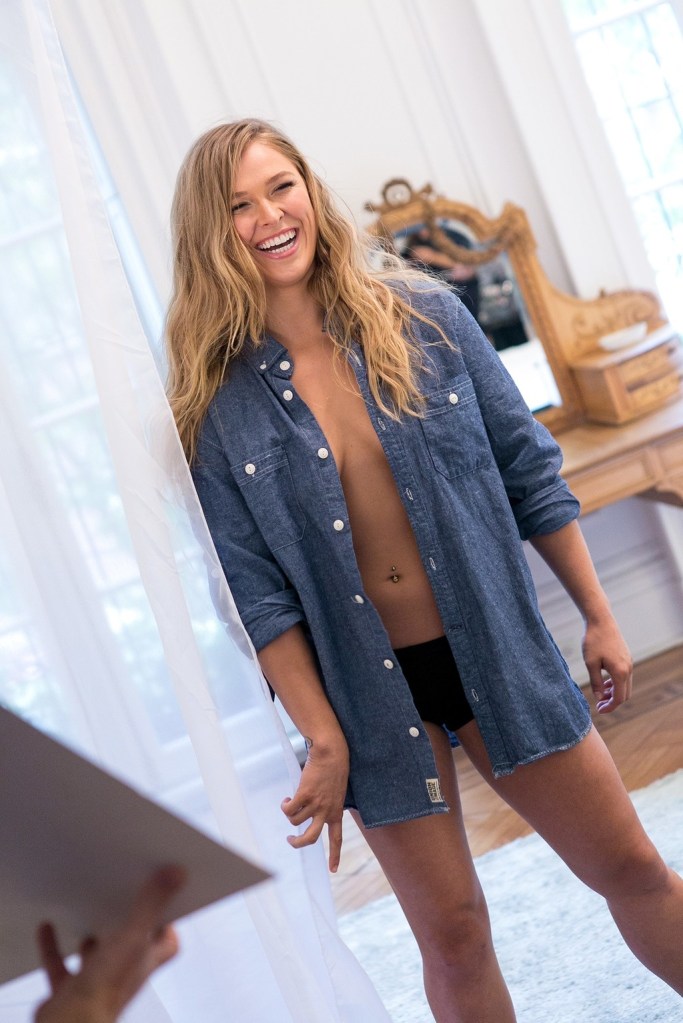 The best thing about my job is:
Winning and waking up the next morning euphoric and ready for a huge breakfast—and free Buffalo clothes!

I bet that the next big health trend will be:
Hopefully the next health trend will be growing your own veggies and composting because good, mineral-rich dirt gives you badass veggies that makes you realize grocery store veggies have no flavor and usually come from depleted soil. It’s just a good survival skill in general to know how to grow your own food.

My workout wardrobe is filled with:
Reebok is my favorite activewear brand, and they make the only combat apparel that is specifically designed for women. They’re getting better and better every season.

I motivate myself to train and work out by:
Doing stuff that’s mentally engaging. That makes me look forward to going to the gym and training—it feels great to do something you’re awesome at, and it’s interesting having so much to learn every day. I’m convinced I can get my body to do anything I learn, so I have to learn as much as possible, as fast as possible, and get as ninja as possible before I get old and fall apart at the hinges!