There are some celebrities we see all the time, at every red carpet event at fashion shows and all over Instagram. Rihanna is someone who makes an appearance only when she wants and we jump for joy each time she does. Take Rihanna’s new selfie, for example, showing off her new braids. The triple-threat just posted an adorable photo in which she’s smirking at the camera with new cornrows and a completely bare face.

“First selfie of the year doe,” Rihanna captioned the photo of her cornrows on Instagram. She’s been wearing braids since before the holidays. She was seen at JFK airport in New York City with the same cornrows and long braids, a bit different from the ones she wore to the Fashion Awards in London in early December. This is the first time we’ve seen her smiling wearing no makeup, though, in a while. Of course, it’s possible she has a little on (maybe some lip gloss) but she looks naturally pretty. She even has a little red pimple that’s barely noticeable. But leave it to a fan to notice.

Of course, RiRi had a hilarious moment the fan in the comments. After he wrote “Let me pop your pimple,” she responded: “Let her have her shine, PLEASE.” Some celebs could have called out the fan for pointing out their acne but Ri isn’t bothered—and the tiny blemish isn’t ruining her day. As if we all don’t have photos with a breakout? 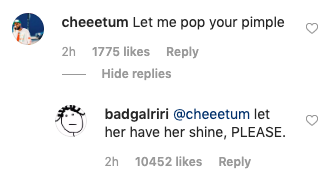 It’s refreshing AF to see celebrities embracing their skin. In 2020, we don’t have to cover pimples. We let them shine, RiRi style.