Celebrity endorsements aren’t exactly few and far between; they feel very ingrained in our culture. So it’s beyond refreshing when a brand and its chosen face boast a genuine relationship. In her first major brand deal ever, Rachel Brosnahan has linked up with Cetaphil, everyone’s favorite skin care staple. Though the company has been around since 1947, their collaboration with The Marvelous Mrs. Maisel star marks the first time in Cetaphil’s history that they’ve had a celebrity ambassador. The cult-classic skin brand clearly wouldn’t recruit just any famous face to front their line, and that brings me to Brosnahan.

As an actress who spends most of her time standing in Midge Maisel’s 1950s-style pumps, the 28 year-old actress has had to be very deliberate about her skincare routine. She grew up in the Midwest, with its tumultuous weather, and spent her teen years as an athlete. Brosnahan understood early on the importance of using products that wouldn’t irritate her sensitive skin. Though her schedule has only gotten more hectic, the House of Cards alum has stuck with Cetaphil all of these years, and her nearly-poreless complexion is living proof.

On the day that her partnership with Cetaphil was announced, I had the opportunity to sit down and chat with Brosnahan. After bonding over our Midwestern upbringings, and musing over gel nails and charcoal teeth whiteners, we discussed her passion for Cetaphil, the five products she would take with her back to the 1950s and why she’s disgusted by the pesky trope that women aren’t funny. 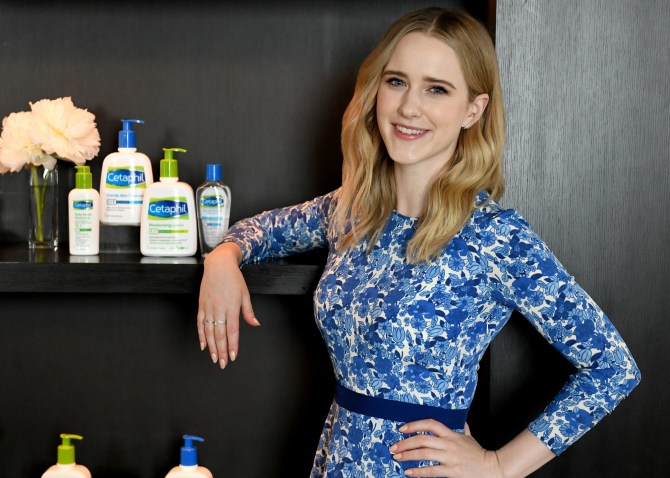 “I’ve actually been using Cetaphil for the better part of ten years, so it felt like the most natural fit,” Brosnahan revealed. “I was introduced to it in high school. I was an athlete, and I’ve always had really sensitive skin. I feel like the sweating a lot and the weather and sports combo, I felt like my skin was so irritated all the time. I break out when I get too dry or too oily; so I just felt like it was a deadly cycle. The showering all the time–multiple times a day, my skin wasn’t having it.”

Like many of us, when we were first introduced to some of our favorite skin care and beauty brands, it was Brosnahan’s mother who first suggested Cetaphil to her. “She said, ‘Use this. Just use this and a moisturizer,’ and it changed my skin,” the New York University alum explained. “I had incredible skin, especially for a high schooler when you’re a raging hormone. It’s been a staple for me ever since.”

Brosnahan’s critically acclaimed Amazon series The Marvelous Mrs. Maisel is set in the 1950s, about a decade after Cetaphil was first founded. The fashion and beauty were decidedly glamorous at the time, so I wondered what products would be must-haves for Brosnahan if she had to travel back in time to Midge’s era. “I would take the Cetaphil Gentle Skin Cleanser with me,” she laughed. “I learned that in the 1950s, the gentle cleanser was around, but it was more of a cold cream. The formula hasn’t changed since 1947, but in terms of the packaging, it came in a jar.”

As a modern beauty consumer, that’s not the only item Brosnahan would slide into her time-traveling train case. “In the 1950s, women got their hair set and didn’t wash it very often to keep their style. I’m obsessed with dry shampoo, so I would take Psssst! Dry Shampoo. I’d have to take NARS Radiant Creamy Concealer, that’s daily for me. I would take Crest White Strips also. It’s tough to whiten your teeth. I don’t know how people did it in the 1950s. And I’d take the Olaplex Hair Repair System. I’ve been color treating my hair, and I feel like a lot of women color treated their hair in the 1950s as well. I’d bring that with me to keep my hair healthy and shiny and from breaking.” 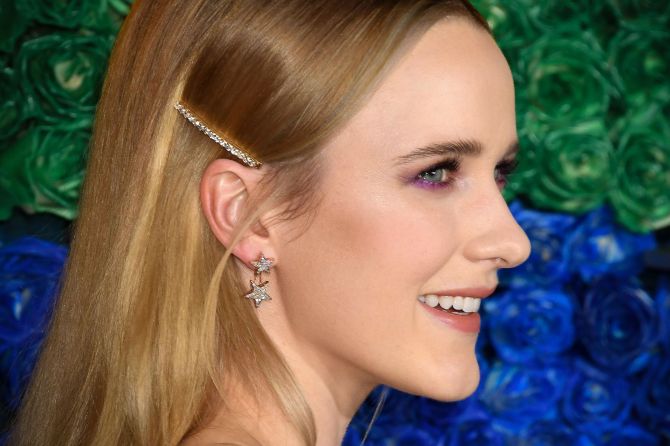 Since her first introduction to Cetaphil about a decade ago, the Emmy Award Winner has gotten even more meticulous about the care of her skin, due to the nature of her work. “It’s important to me because I have found a routine that works for me, and I’ve stuck with it,” she explained. “There are more irritants around. I live in New York City, and I wear a lot of makeup for work.”

When we first met Brosnahan’s character Midge in The Marvelous Mrs. Maisel, her beauty routine involved an elaborate ruse that resonates with some women and shocks others: Midge jumps in and out of bed to put on and remove her makeup before her husband wakes up, so he never sees her without her face painted. “I don’t wake up in the middle of the night to put my makeup on,” Brosnahan laughed. “That’s probably the biggest difference. My beauty routine is much more simplified than Midge’s. I try to use just a few products that I know work and stick with that. I have such limited free time; I don’t want to spend an hour getting ready in the morning. My skin can also be irritated by travel, so the Cetaphil Moisturizing Lotion and the Gentle Makeup Remover are must-haves for me.”

Playing a female comedian in the 1950s who strives to overcome the era’s marked sexism, Brosnahan is particularly sensitive to the misogyny and disrespect that women still have to confront today–six decades later. She’s especially annoyed by the maligned notion that “women aren’t funny.”

“I can’t believe that anyone ever said or is still saying that,” Brosnahan exclaimed. “I have no words because it’s such a ridiculous idea. I would say, ‘Fuck off, go watch Sarah Silverman, and Amy Schumer, and Joan Rivers, Jean Caroll, Moms Mabley.’ Women have been just as funny, if not funnier than men for a very long time, and continue to be. Women have a higher emotional intelligence, and I think that leads to a different kind of humor. Humor is subjective, everybody finds different things funny. But there’s nothing that separates the genders, nothing that makes one gender better at jokes than the other.”