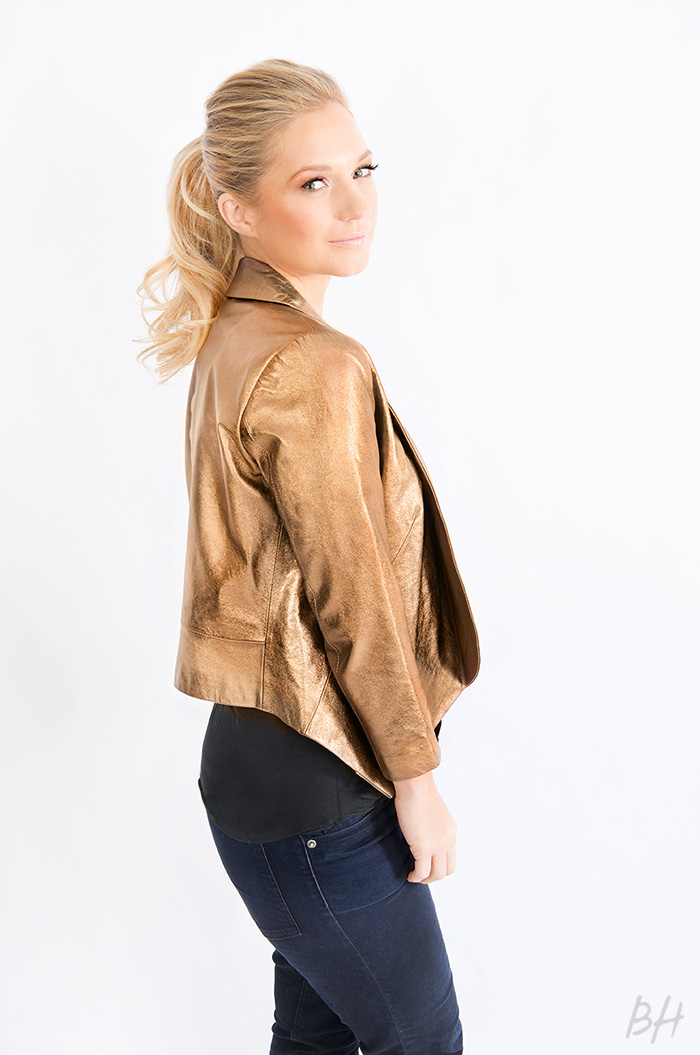 There’s no denying that the girls on ‘Pretty Little Liars’ work some of the best beauty looks on television. Between their hair and makeup choices, the end of each episode leaves us ready for the next (duh) totally psyched and ready to try a new trend or character signature. One look we’re totally obsessed with? The perfectly tendril-y waves of actress Vanessa Ray’s ‘PLL’ character CeCe Drake, the twin-like confidant to Allison that always seems to keep us intrigued.

So you can imagine how thrilled and excited we were when we got the chance to sit down with the lovely and talented Vanessa—who also stars in ‘Blue Bloods’—to talk about her IRL product obsessions, beauty secrets, where she gains inspiration for her Rosewood-based character, and all things pop culture. She also gave us some insight into the beauty trend she’s dying to try and one of the coolest cucumber facial tips we’ve ever heard. Check out the interview below!

The ‘Pretty Little Liars’ cast is obviously well-groomed and very well known for their glam. Out of all of the girls that you have worked with, whose beauty look would you want to steal?
Vanessa Ray: Shay Mitchell every time, 100% of the days of my life. If I could just wake up and even have a little bit of the texture of her skin, I would be the happiest person alive.

Also, you have obviously spent a lot of hours in hair and makeup, being on set, have you gotten any great secrets or tips from makeup artists or hair stylists?
One of the things that I just heard recently was from another actress who was doing a guest star role on our show. She’s been working for a long time. She’s a little older than I am, and she had put Vaseline all around your eyes. I started doing it and when I would come into work they would be like, ‘Your eyes always look so bright and happy.’ That and a frozen cucumber—rub that all around your face in the morning.

That’s really good tip.
It takes down the swelling.

What beauty products do you never leave the house without?
Concealer. I use Amazing Cosmetics concealer that is an absolute. It is terrifying if I leave without it. And my mama who is not a very—she’s not a girly-girl. She’s not someone who would ever say anything like this because it would be very out of character, so I know she meant it. She said to me a long time ago, ‘Some girls can leave the house without mascara or makeup, but you kind of can’t.” She’s like, ‘Mascara is like is a non-negotiable for you.’ Oh, okay. So I always have concealer and mascara on.

Do you have a favorite mascara?
I don’t. I am such a mascara whore. I will try everything. Right now I got a free gift at Sephora at Bobbi Brown’s new line. I kind of love everything Bobbi Brown that is out there. I am using a Bobbi Brown mascara right now, and I like Great Lash. I think mascaras are fun because you keep trying different ones and you’re like, ‘OH! This is the best one” and then you get bored of that and you go to something else.

Would you ever try or have you tried lash extensions?
Absolutely. I have tried and I will do it again, but my problem is thickness. I need thicker, like Latisse and stuff. I need that. But yes, I have definitely gone and thought, ‘This could go one of two ways—I’m either going to have all of my eyelashes fall out or they are going to look amazing.’ You know what I have used recently? It is this eyelash thing–which is why I stopped getting my eyelash extensions. You put on a primer and then you put on false lashes over the top of it. It is a mascara that has fibers that attach to your eyes and it creates the look.

MORE: Get to Know Janel Parrish of ‘Pretty Little Liars’

A few different brands are doing something similar now.
Younique! I have bought it for my mom and for my sister-in-law for Christmas. It does that look but simplifies it.

Is there any beauty look that you are absolutely dying to try out?
I want to try all the peels. I want pastel hair. I want pale like pink that goes into a really pale pink in the tips.

I feel like CeCe can have pastel hair.
CeCe can come back from somewhere—she goes to Paris. She’s ahead of the times.

To play someone like CeCe, who are you pulling inspiration from?
Yes. I have very specific people she is based on. One is a friend of mine who is a fashion blogger and does a lot of other things. Her name is Emily Loftiss, and she could not be more CeCe Drake. Everything about her is CeCe Drake. She is sort of Queen B. She is lovely. She’s not like a pathological liar and like all the other weird traits. The other is my two roommates. My friend Dani Spieler, who I just, I have never met somebody who puts so much meticulous work into a look. When I first moved in, Halloween was a week away and she had painted her entire face green and was working on the shading. I was like, ‘What are you doing?’ and she was like, ‘Halloween is in a week. I just want to make sure I’ve got my look down and it is set so I can do it next week.’ And my friend Connor Gallagher—the way CeCe talks is just Connor Gallagher.

Obviously, you play a cop in ‘Blue Bloods.’ Two very different roles.
CeCe kills cops and I play one.

So what’s it like taking on these two very different roles?
I am so lucky that I get to because it is just so cool that I get to kind of live out these two little dream fantasies. One of being a super girly-girl with extensions and nails and lashes and pastel clothing, things that Eddie Janko would never wear. And then I get to explore a little more vulnerable side with Eddie. I think with all of the things that are happening to her, she is constantly discovering what her job really is. I am just a really lucky that I get to play a role as sort of silly as CeCe and as complex as Eddie. And Eddie is pretty silly, too. I feel like I should do a YouTube video of the two of them having a conversation.

That would be so funny.
They would just have nothing to talk about. It would be awesome. I think they both went to boarding school.

Social media is obviously huge for the ‘Pretty Little Liars’ audience—kind of for both shows. How do you stay engaged with your fans?
I try and tweet and let them know when I am around when either show is on—put pictures up of things that I am doing and kind of let them into my life a little bit. It is interesting because I am sort of bad with technology in general. I don’t know where my phone is most of the time. I don’t like to text people back, and I am kind of bad at it. I am where I am. Sometimes I have a hard time with that, but I find with the fans is that they keep me engaged in what is happening. They’re not fanatical and weird. They just are passionate about it. They are lovely and kind and have hopes with your character and have dreams for your character.

Do you have a favorite emoji?
Yes, that dancing lady in the red.

That’s a good one.
Did you guys see during the Golden Globes, there was a picture of Catherine Zeta Jones and they were like, ‘It’s her! It’s the dancing lady.’ It is my favorite thing in the world.

If you had to be an emoji which one would you be?
I would be one of those two blonde dancing girls who are holding hands. It could be me and my best friend Kelly—that’s what we would be. They are just two girls dancing and happy.

MORE: Learn How to Look Like All of Your Favorite ‘Pretty Little Liars’