A few months back, I met up with Alicia Yoon, founder of Korean skincare mega-site Peach & Lily, in a hotel room in midtown. She was going to give me a “personalized facial,” which at first, seemed like a gimmicky-but-nonetheless-relaxing way for her to push some of her newest products on me for the possibility of coverage. I’d been having some fun new hormonal acne issues and figured my usual (read: not Korean) route wasn’t helping much, and I’m nothing if not a beauty guinea pig, so I gave it a shot. But a few minutes after I showed up, it became immediately clear she wasn’t about to push anything on me. Instead, she told me, she was going to give me a massage. I mean, okay.

She barely even gave my hormonal acne any more than a cursory glance before she’d asked me about my diet, my skin-care routine, and my menstrual cycle. After going through my morning and nighttime routine, I told her that the acne was new, and that my stomach was particularly sensitive for the first time in forever, making me feel perpetually bloated. I wasn’t totally sure what this had to do with my treatment, but Yoon, a facialist by trade and student of Eastern Ayurvedic medicine, didn’t try to diagnose me. Instead, she laid me down on a makeshift massage table, and got to work massaging my pressure points. “When I go to acupuncturists or eastern medicine doctors in Korea, they tell me that there are hundreds are pressure points in the human body,” she told me as she settled in by massaging the fleshy part of my hand where my thumb and pointer finger meet. They’re called energy meridians, she told me, which, in oversimplified terms means this: it’s all connected.

“The whole body is an ecosystem and the skin is a window into the health of that ecosystem,” Yoon said. “Therefore, improving one part of your ecosystem can improve how your skin looks, too.” I’m a skeptic to a fault, so I just sort of smiled and nodded. That point on my hand she was massaging? That’s apparently related to the stomach and digestive tract The ears relate to the kidneys; the heart’s pressure point is on the side of the palm, just underneath the pinky. Pressure points are also why applying pressure

“Just kneading this out even a couple minutes a day can be really really helpful in just improving your whole health,” she told me, likely as my brows furrowed. Then she focused on my ears for about five minutes, which is easily one of the weirdest sensations I’ve ever felt. “The kidney is really important for waste removal, and if there’s a lot of stress on your system and your adrenals, you’re not going to feel great—it can impact your thyroid, too. This’ll help move everything along,” she said, mid ear-massage. 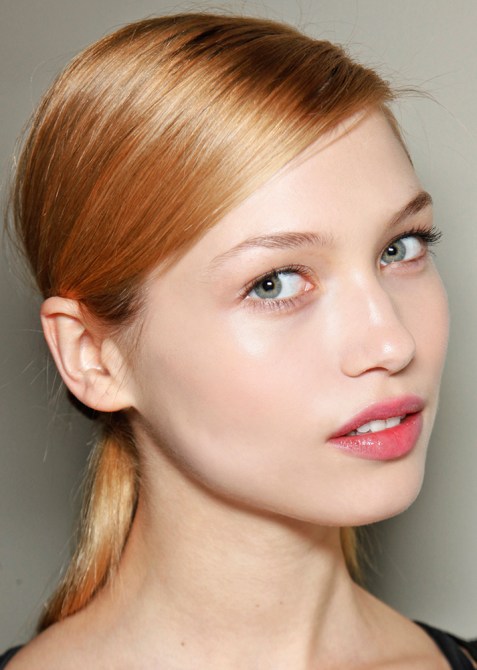 I let her have at it for about half an hour, amazed at how relaxed I felt. (A lack of extractions can do that to you). Eventually, she slathered some products on my skin—she double-cleansed, used a toner for brightening, pressed on a few essences and serums—and I walked out wondering what the hell just happened to me. Of course, the topical routine made my skin glow in the immediate, but it wasn’t until two days later that I saw any real, marked changes. My acne didn’t clear up in 48 hours, but my skin looked brighter, my eyes appeared less sunken and dark, and for the first time in weeks, I was—TMI alert—regular! So is there any actual truth to this stuff?

“In general, the theory of the meridians isn’t a focus of Western medicine, but nonetheless we do know that massage works to benefit the body in other ways,” says Holly Phillips, an internist in NYC, who reminded me that Sea Bands for nausea call this theory into play. “Acupressure, which is more casually called ‘pressure point massage,’ is considered to be a form of acupuncture, just without the needles. Versions of both therapies have been practiced throughout the world for thousands of years, particularly in China. It improves circulation, which then boosts lymphatic drainage; it lessens muscle tension, and decreases inflammation in our blood vessels which is linked to cancer, heart disease, and depression; and [it can] stimulates the release of endorphins from the brain that lessen pain and improve mood.” A lot of that, as you can imagine, can also lead to clearer, brighter skin.

While Dr. Phillips did say she’d like to see more studies on the effectiveness of acupuncture and acupressure, she also said that “if they didn’t have any benefits, they wouldn’t still be around 4,000 years later.”

Still, Yoon herself said “the jury’s out” on whether or not pressure point massages can really get rid of acne, but I’m hopping right on the bandwagon. I’ve spent the last few months massaging my hands before I get out of bed in the morning—it’s a great excuse to hit snooze and stay lying down for another nine minutes—and I take a break between shampoo and conditioner to give myself an ear massage. I’m happy to report that my skin has cleared up considerably, and I don’t have the same stomach issues that plagued me six months ago. While I’m not going to put down the retinol any time soon, I don’t mind having another trick in my arsenal for clear, bright skin, even if science is only half-way on board.