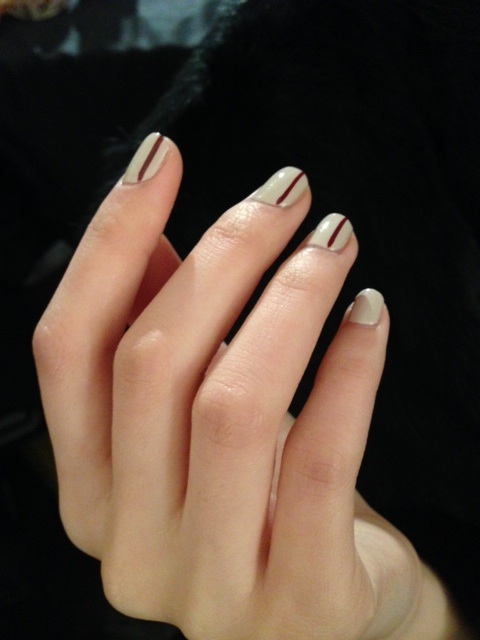 Prabal Gurung teamed up with Sally Hansen for yet another season (their eighth consecutive partnership), bringing us three new gorgeous nail shades to pair with his fall collection. Inspired by the beauty of Nepal, the designer channeled the country’s rich colors and textures for his Fall 2014 collection, and we see that played out in the new nail line, which features a Rhododendron (a crimson), Rupee Red (a burgundy) and Himalaya (a nude).

For the runway show, manicurist Jin Soon Choi created a subtle yet sleek nail art look that anyone can replicate at home. She painted two coats of Himalaya on each of the nails, giving the models an opaque nude base. Then, for six of the girls she gave them an off-center stripe in Rupee Red down the nail. Jin noted that in order to get a straight line, it’s easiest to hold the brush steady, and then drag your nail along the brush instead of moving your brush along the nail. She also chose to paint these stripes on just the three center nails, keeping the look minimalistic and chic.

The three limited-edition polishes will be available beginning in September 2014 and are part of the Sally Hansen Complete Salon Manicure collection.