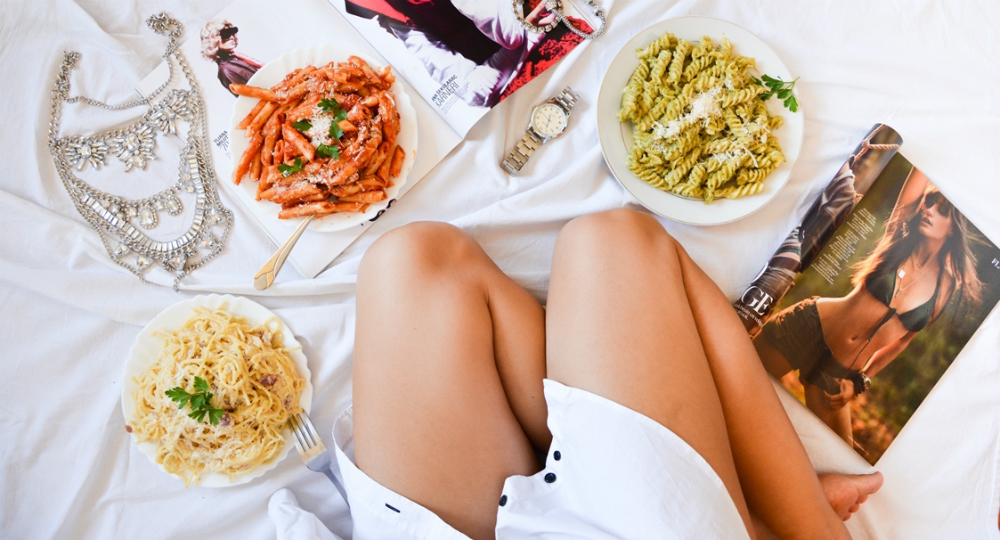 Imagine living in a world where a pasta-heavy diet was not openly frowned upon by 20-year-olds sharing homemade acai bowl recipes with their 15,000 Instagram followers and celebrity personal trainers alike, but rather encouraged, as if eating penne alla vodka four times a week was a smart thing to do for your health. Shockingly, this just might be the world we actually live in, according to a study conducted by researchers in Italy, where pasta is from.

The scientists from the Department of Epidemiology and Prevention at IRCCS Instituto Neurologico Mediterranean Neuromed in Pozzilli examined the diets of over 23,000 adults and concluded that pasta isn’t going to kill you or ruin your #bikinibody—in fact, the research, published in the journal Nutrition & Diabetes, found an association between pasta consumption, a lower prevalence of obesity, and a healthy BMI.

MORE: 5 Healthy Carbs You Don’t Have to Feel Guilty About Eating

It all comes down to the beloved Mediterranean diet, which is packed with vegetables, fish, fruit, olive oil, and whole grains. “In popular views, pasta is often considered not adequate when you want to lose weight, and some people completely ban it from their meals,” says Licia Iacoviello, the head of the institute’s Laboratory of Molecular and Nutritional Epidemiology. “In light of this research, we can say that this is not a correct attitude. We’re talking about a fundamental component of Italian Mediterranean tradition, and there is no reason to do without it.”

George Pounis, the paper’s lead author, adds, “We have seen that consumption of pasta, contrary to what many think, is not associated with an increase in body weight, rather the opposite … Our data shows that enjoying pasta according to individuals’ needs contributes to a healthy body mass index, lower waist circumference, and a better waist-hip ratio.” But what if my individual needs involve three large bowls of rigatoni bolognese eaten nightly? Is that considered part of a balanced Mediterranean diet? Seems yes.

MORE: How to Cheat on Your Diet—and Still Lose Weight