One of the household food names that’s an infallible classic is the one and only, Oscar Mayer. It’s the king of cold cuts that’s given everyone a lifetime of delicious subs and snacks. But just when you think Oscar Mayer really only focuses on what it does best—bologna—it creates a product that is completely out of the ordinary, both for the company itself and in general.

As you’ve already gathered from the headline, Oscar Mayer recently came out with a sheet mask that could pass as its bologna’s doppelgänger. Yes, a beloved meat company that has been around since 1883 really did just dip its toe into the realm of skincare—maybe not so much a dip, but a splash.

Before we go any further, we’d like to clarify that no, the face mask is not made of bologna, nor does it smell like it either. Absolutely no bologna was used in the making of this sheet mask. Everything from the product packaging down to the mask itself mimics Oscar Mayer’s O.G. bologna, and we’re seriously in awe of this genius creation.

It’s honestly the weirdest yet coolest sheet mask we’ve ever seen. If you, too, are entranced by this bologna-inspired face mask, you can get one on Amazon for $5. But be quick because the product already sold out earlier. Luckily, it’s back in stock right now, so stock up while you can!

RELATED: Glossier Listened to Fans and Relaunched Its Viral Solid Perfume—With an Upgrade 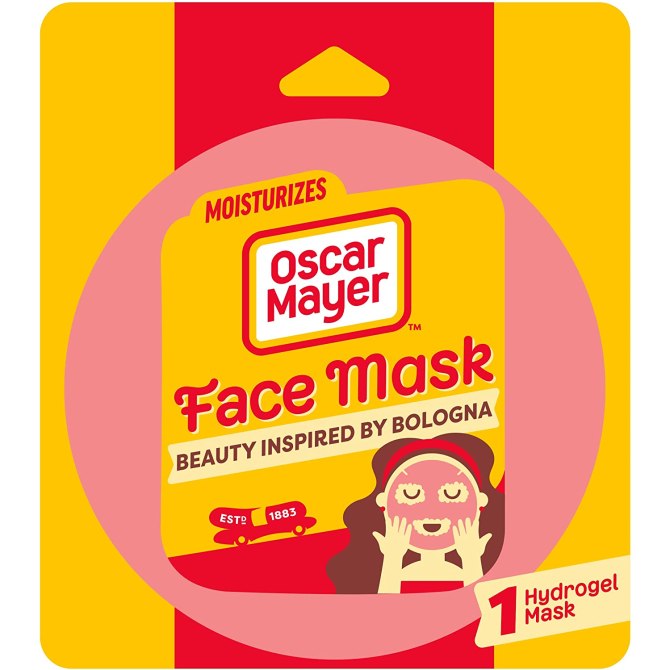 You’re probably still in shock over this groundbreaking invention. It’s a crossover truly nobody could’ve seen coming. But we’re glad Oscar Mayer made this power move, and it’s clearly paid off. The mask has already sold out before, but is currently back in stock.

Besides the fact that it looks just like the meat company’s famous bologna, it does actually contain beneficial skincare ingredients. Witch hazel and seaweed-derived ingredients deliver lots of hydration to your skin, while collagen boosts elasticity.

“This is really cute and funny, but also does work well!” wrote one shopper who gave the mask a perfect five-star rating. “And, most of the beauty masks out there tend to be too big, but this one is a really good size and fits well without overlapping your hair, nostrils, eyes, mouth, etc.”

Clearly, there’s more than meats the eye with this playful yet effective sheet mask. It might be super quirky, but it really does moisturize your skin.

There’s nothing better than self-care enhanced with a little Oscar Mayer meat. So, go on, you know you want to try this bologna hydrogel sheet mask.