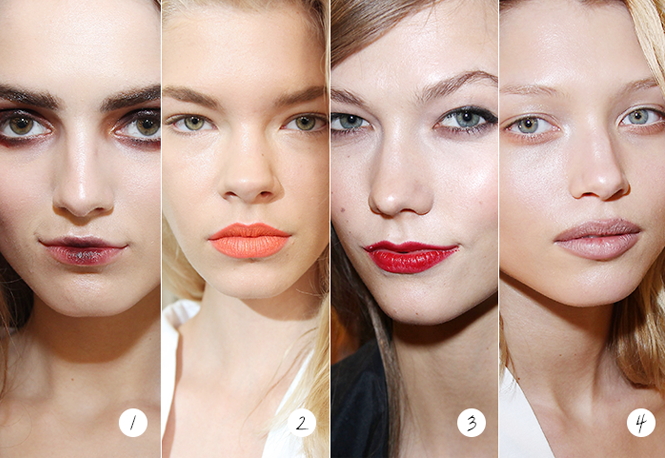 The buzz about the Oscar de la Renta show this Fall 2013 season was well-deserved. Revlon Global Artistic Director Gucci Westman created four incredibly diverse makeup looks for the collection, each a gorgeous achievement on its own.

“Each of the four looks represents a different type of girl: gypsy, sophisticate, urban chic and East Asian jet setter. The one common thread is purity. I created a look that highlights the innate beauty of the face from the eyes to the lip to clear, shiny skin,” said Westman.

The dark-eyed gypsy look, the first of the four, was incredible. The dramatic face was a combination of Illuminance Crème Shadow in Not Just Nudes, Super Lustrous Lipstick in Chocoliscious, ColorBurst Lip Butter in Red Velvet and ColorStay Ultimate Suede Lipstick in Backstage on the cheeks. The dramatic eyes were set with PhotoReady Shadow and Primer in Muse from The Fall/Winter ’13 Collection by Gucci Westman (available October 2013), Super Lustrous Lipgloss in Shine City, Luxurious Color Eyeliner in Black Velvet, PhotoReady 3D Volume Mascara in Black, and Limited Edition Eye Shadow Palette in Midnight Express from the Fall/Winter ’12 Collection by Gucci Westman.

The second look, Urban Chic, focused on a bright lip. The look was achieved with ColorStay Ultimate Suede Lipstick in It Girl.

The third look was a bold red lip focused stunner inspired by East Asian Jet Setters. The luminous complexion was set with Revlon Nearly Naked Makeup, and the beautiful lip is courtesy of ColorStay Ultimate Suede Lipstick in Trendsetter or Finale or Super Lustrous Lipstick in Cherries in the Snow or Cherry Blossom, depending on the model.