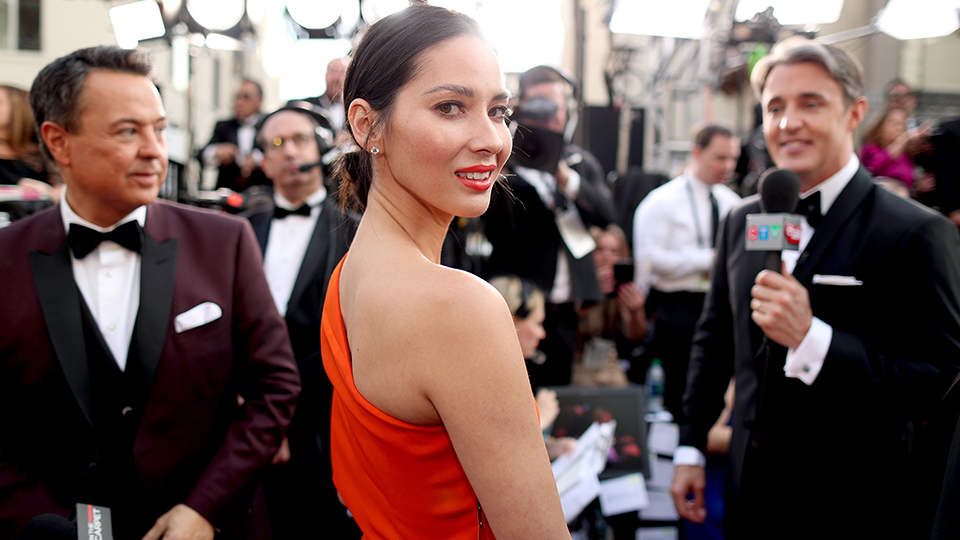 Olivia Munn looks different and she knows it. She’s so aware of it, in fact, that she took to Instagram last week to explain away the fact that her eyes look bigger and brighter, her cheekbones higher, her nose slimmer, her lips fuller, her jawline more defined, her skin plump and poreless—in other words, she tried to explain exactly why, and how, she looks like an entirely different person.

She offered up two pieces of evidence—a photo of herself from a year ago, and a photo from a month ago, presented side by side. “Here are the four skin tips I’ve learned just over this past year that really helped the texture and shape of my face,” Olivia divulged.

Tip one: Lose weight. She lost 12 pounds this past year, which she says leaned out her cheeks and jawline. Tip two: Reshape your brows. “A facialist pointed out to me that I was shaping my brows into a frown,” she says, so she gave them a revamp for a more horizontal angle, which “instantly brightened” her eyes. Step three: Get rid of sunspots, but only with Proactiv+ Mark Fading Pads. (Olivia is a spokesperson for Proactiv+.) Tip four, the most crucial of all: Olivia swears by eating potatoes native to the Yuzurihara region of Japan. If you do all of these things, you, too, can slowly transmogrify into Megan Fox.

But back to those potatoes. The village of Yuzurihara has been called the Village of Long Life, particularly in a Connie Chung segment that ran on ABC News back in 2000 and explored the possibility that the region’s unique diet, rich in the hyaluronic acid derived from their locally grown starches like satsumaimo, a sweet potato, satoimo, a sticky white potato, and imoji, a potato root, may very well be the secret to aging well and living long. 80-year-olds look 50; one 93-year-old resident has worked in the sun for 50 years sans sunblock or moisturizer and yet maintains a soft, smooth, healthy complexion.

There’s no argument that hyaluronic acid, which the body produces naturally yet tapers off as one ages, is good for skin and body both. Used topically, it helps skin to retain its elasticity, and eating plenty of foods rich in HA can help to stave off joint discomfort. But as for Olivia’s claim that the HA in these potatoes has helped her to practically reverse the aging cycle to look younger than ever? That’s up for debate.

Nutritionist Marie Spano, MS, RD, CSCS, CSSD, isn’t buying what she calls the “immediate dramatic effect” that Olivia suggests is encouraged by Japanese potatoes alone. Though studies have indicated that hyaluronic acid, when ingested, can help to moisturize the skin, “the skin-care benefits of foods or supplements typically take time,” Spano says, so a few years of eating satsumaimo for dinner without other significant lifestyle changes is not going to guarantee more youthful skin, point blank. Not even when combined with Proactiv+ dark spot-fading pads. 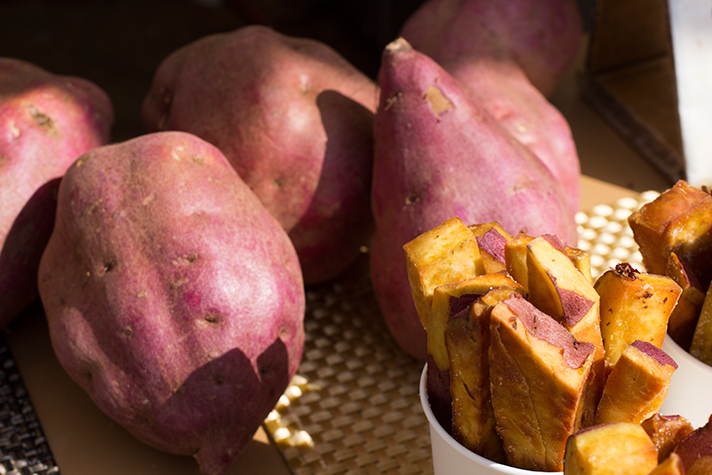 Here they are: the satsumaimo potatoes. (Getty Images)

While, yes, the people of Yuzurihara do look rather youthful and live longer, potentially less disease-ridden lives than most Americans (more than percent of the population of the village is 85 or older, which is pretty significant at 10 times the American norm), “[they] lead a very different life than many Americans,” Spano says. “Their diet is largely plant-based from what I’ve seen, and they’re active. Instead of sitting all day and then getting up and going to the gym for an hour, [the media] portrays a community where people are active throughout the day. They get up and move around all day long.”

So the potatoes, though certainly beneficial, are just one piece in the bigger picture of the varied (and distinctly non-Western) lifestyle that helps Yuzurihara residents maintain better health and better skin. “Olivia Munn is crediting her dramatic”—and, we’ll note, pretty rapid—“results to consuming these potatoes for a short period of time, while the people in [Yuzurihara] have consumed these potatoes and other vegetables throughout their entire lives,” says Spano. The official verdict on Japanese potatoes: Good for you, but not going to singlehandedly give you a face-lift.

The same can be said of other foods rich in “anti-aging” components, but including them in your diet means better results in the long-term—not immediately noticeable, but certainly better aging over time just by healthy eating. Spano’s picks? Black, green, and oolong teas, fatty fish, and foods rich in “a variety of carotenoids,” including lutein and zeaxanthin. These include dark green leafy vegetables, corn, orange fruits, and veggies—“purple, black, blue, and deep red-colored veggies and fruits,” she emphasizes.

“There is power in the colorful pigments in produce that can help decrease inflammation, edema, and oxidative damage. Consume these over a lifetime, and you’ll do something good for your skin and entire body,” Spano says.

And dermatologist Dr. Christine Choi Kim, MD, adds, “A balanced healthy diet that is rich in the antioxidants found in fruits and vegetables, lean meats, and essential fatty acids is a better approach than focusing on ingesting a particular food or supplement with little scientific evidence to support its benefits.”

We can’t say for sure what Olivia’s actual secret is, but it probably isn’t Japanese potatoes.