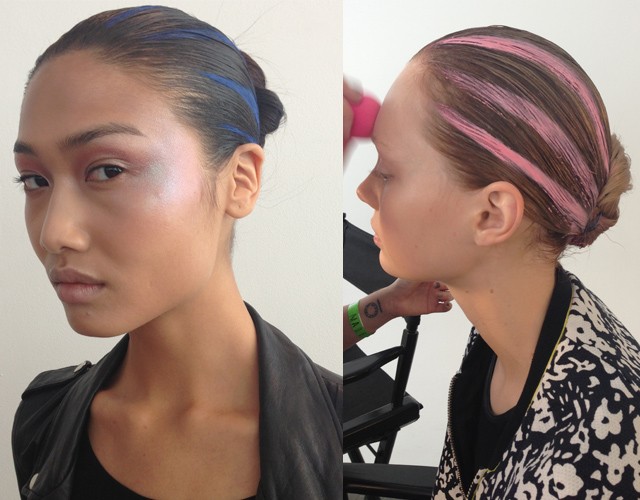 One of our favorite things about fashion week (and we’re guessing yours too) is to see the products that haven’t hit stores yet already in use on the runways. And better yet, we love it when they’re used in fun and unexpected ways. So, you know we were thrilled to go backstage for the Ohne Titel spring show and find Bumble and bumble’s Jimmy Paul playing around with their new Spray Chalk, which will be available in salons at the end of September.

He wasn’t just applying the spray chalk haphazardly though – Paul told us that with the inspiration of the architectural and knotted collection, he chose to apply the chalk in stripes on the model’s head with paper stencils. This was of course after he had pulled the hair tightly into a bun (with a lot of Bumble and bumble gel) tying it into a simple knot at the end and finishing with Bumble and bumble Spray de Mode. Paul also noted that the color of the chalk depended on the girl’s hair color: Brunettes were wearing the Cobalt chalk, and blondes were wearing Blush Pink.

Lucia Pieroni for MAC Cosmetics wanted to give the girls a futuristic, sci-fi makeup look to introduce a bit of color into the overall neutral collection, and go with the flow of the hair chalks. She chose to create an “unrealistic” skin with just a touch of color. She didn’t use foundation but instead mixed concealer with Strobe Cream all over the face, and then used Luna Cream Color Base as a base underneath the eyes and the cheek area to add sheen. For the eyes, Pieroni added Dual Jewel Pressed Pigment starting from the crease of the eye down to the cheekbone and blended it in to the skin to make it all look very “surreal so that you don’t get a block of color.” She added that the entire thing is greens, blues and pinks, and it’s meant to look a bit unreal – almost like a mermaid.

On the nails, the models wore one of three metallic shades from Priti NYC, either Chrysanthos, Old Man Cactus or Pewter Veil depending on their outfits.

More From Beauty High:
Get the Cherry Stained Statement Look at Monique Lhuillier
Louise Goldin Brings Brown ’90s Lip Color to the Spring Runway
Get a Pop of Color on Your Lips From Prabal Gurung’s Spring NYFW Show