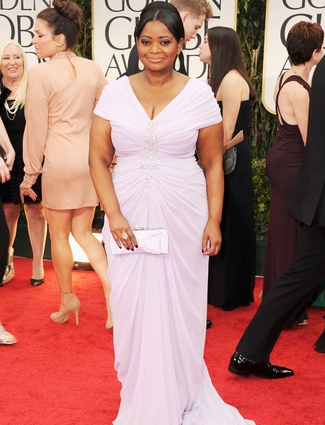 Octavia Spencer wears three pairs of Spanx when she has to walk the red carpet.

Try on Golden Globes hairstyles in the Makeover Studio

The Help star, who has been cleaning up this awards season with trophies from the Golden Globes, SAG, and Critics’ Choice Awards, admits she gained the “illusion” of an hourglass figure by layering the celeb-loved shapewear.

“I was not a Girl Scout, but I try to be very, very prepared,” Spencer said. “I triple Spank. Which is not good. Spanx really, really work, but you don’t need to overdo it.”

Melissa McCarthy has also been known to pile on Spanx, which she and Spencer bonded over in an after-party bathroom. Spencer told Ellen DeGeneres, “I was being pinched in places that I didn’t know it was possible… I said, ‘Oh my God, Melissa, I’m about to die. My Spanx are killing me. She said, ‘I just went to the bathroom and took mine off.’ “