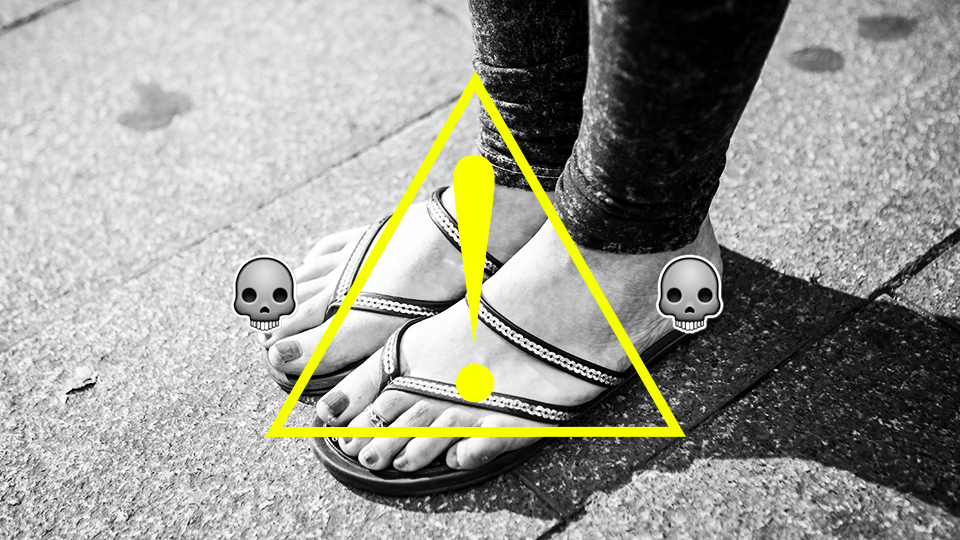 Living in a big city means that, between the test of fortitude that is public transport and the general reality that is being surrounded by strangers all the time, it’s inevitable that I see hundreds (thousands?) of different people every day. Most of these people are wearing shoes, because it’s socially unacceptable not to. You gotta wear shoes, man.

But I have something else to contribute to the footwear-or-no-footwear conversation, which is: Flip-flops are not shoes. Flip-flops are a flat piece of rubber affixed to your foot by another small piece of rubber. Flip-flops are one tier above the paper “sandals” they give you after you get a pedicure, which are also not shoes. And there’s absolutely no reason anyone should be wearing flip-flops around the city during the summer, walking around all day, taking the subway, bare skin and toes fully exposed to all the things city streets have to offer.

There’s more to bringing sandals off the beach than the fact that it’s unfair to subject the people around you to a gratuitous viewing of dirty feet, though that is certainly valid: It’s also a health risk. “Flip-flops are for short walks or to wear by the pool; they’re not meant to be worn all day,” says Dr. Joshua Zeichner, MD, the director of cosmetic and clinical research at Mount Sinai Hospital in NYC. “Exposing the skin to dirt and microbes can lead to infections ranging from athlete’s foot to cellulitis and soft tissue infections.”

Staph, strep, and your usual grab bag of fungi lurk around every corner, which isn’t so threatening when your feet are covered, but Dr. Zeichner says, “Open skin is more exposed to bacteria, and the increased risk of foot trauma can be an entry point for bacteria into the skin.” The actual flipping of the flop, says podiatrist Dr. Gary Evans, can lead to a severe heel callus, which in turn leads to cracks in the skin, which amounts to a cordial invitation for fungi to make their way into the foot and cause infection.

Flip-flop wearers also become, on principle, more susceptible to bug bites and cancer-causing sun overexposure. On a more superficial level, it’s fair to say that nobody wants a tan line in the shape of sandals on their feet. Also, once I wore flip-flops in the ocean and got stung by a jellyfish on the top of my foot, which is only tangentially related but traumatizing nonetheless.

Physical injury is another major possibility, says Dr. Evans. “Flip-flops don’t offer any arch support or cushioning and shock absorption for the feet and legs. Without the support, your foot and toe muscles work extra hard to propel you through the gait cycle.” That muscle overuse can yield everything from tendonitis and leg aches and pains to plantar fasciitis, Achilles tendon pain, and even long-term shin splints.

Also, hammertoes. Walking too much in flip-flops can give you hammertoes. Here is what hammertoes look like, just to drive the point home: 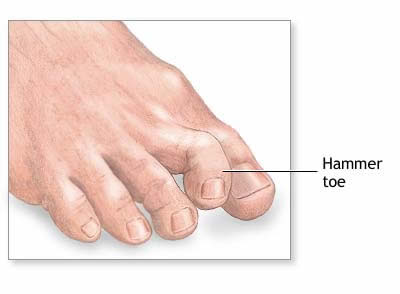 Not ideal. (Though according to this gallery I found via a Pinterest image while googling “hammertoes,” plenty of celebs have them, so you might be in good company.)

So if you’ve gotten in the habit of wearing flip-flops all day every day all summer long—I get it, they’re cheap, they’re easy to slip on, they feel so right when the weather’s hot—it’s probably a good idea to reconsider. Because really, how embarrassed would you be if you contracted an infectious, life-threatening disease because you just didn’t feel like wearing proper shoes that day? Think of your family.