There’s an ancient rumor that if you stand in your bathroom, look into your mirror and whisper “I want perfectly blended makeup” three times, a brand new beautyblender will appear in your hands. Okay, fine, so maybe that’s not true (we obviously wish it were), but it is true that beautyblenders can help you achieve the perfect blend— you’ll just have to pay for them instead of magically conjuring them up.

The fan-favorite tool has endless makeup possibilities, like applying foundation, concealer, bronzer and even eyeshadow, but it also promises plenty of viral hacks. People have done everything from wrapping it inside a condom to cutting it in half. Now we have two more hacks, but instead of altering how we use the tool, these are about cleansing and storage.

Stick It in The Microwave

Beautyblenders are great until it comes time to clean them. A little while back, people figured out you can clean the tool like you would an ordinary dish sponge, and just recently the hack has resurfaced on Twitter causing people to go wild. User @Jaycoko_ posted this past week a video of cleaning her beautyblenders in the microwave and has since gotten over 110,000 likes and 40,000 retweets.

MORE: The 12 Weirdest Celebrity Beauty Hacks We’ve Ever Heard About

She said she simply mixed soap and water in a cup, dropped her blender in and then microwaved for a minute. The result was a fresh and clean blender that we’re guessing also smelled pretty nice. As much as people were excited, others doubted the trick and took it upon themselves to test it. Most of the testers found the hack actually does work, but users who forgot to put their blenders in water learned the hard way that the tool will melt if put in the microwave alone.

With how much we use our beautyblenders, this trick is a serious time-saver.

Store It in an Easter Egg

If you were wondering how @Jaycoko_’s blenders got so dirty in the first place, it’s because her foundation and glitter spilled all over her makeup bag. But that’s where this next hack comes in handy. Redditor @negativelyme found a way to keep your blenders stored and safe from contaminants: an Easter egg. 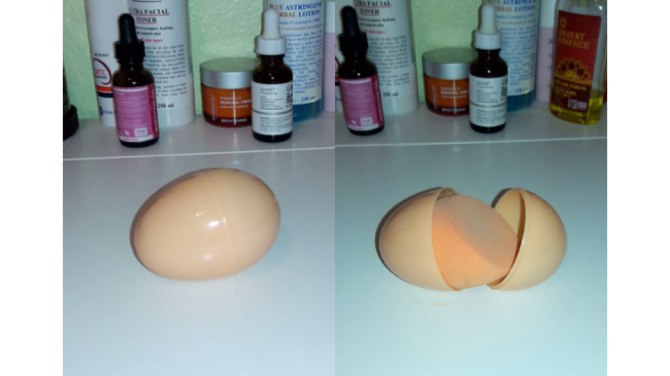 In the thread she explained how she intended this storage to be used for traveling purposes only because keeping a damp blender in a confined space (even if there were holes) could lead to bacteria build up. But it’s still a quick, easy fix for traveling which is usually the place where spills, slips and messes occur the most.

MORE: Kim Kardashian Swears By This Beauty Hack to Glow All Over Her Body

To make the hack even better, user @vron991 said, “I’d probably use the bigger part and melt it with a lighter at the bottom so that it’s flat and sits up.” Who said eggs can’t look cute on a dresser? Plus, this way, you wouldn’t need the top of the egg leaving the blender to air dry and avoiding all those unwanted germs.

We love when our two favorite things come together: hacks and beauty. We can’t wait to see what people do with their beautyblenders next.