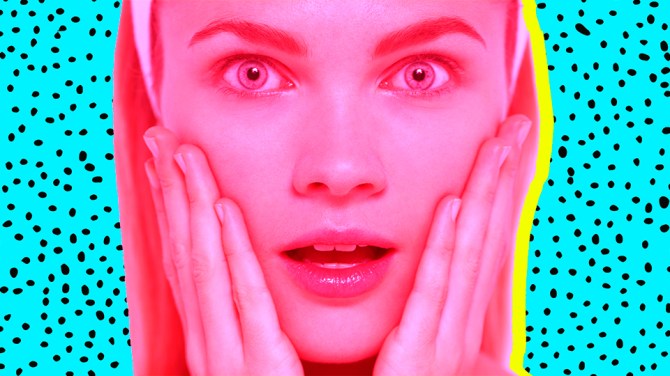 I wasn’t a day over nine when my mom first scolded me for touching my face. My sister, who was 13 at the time, was well into her middle school breakout phase, and I imagine my parents were just trying to keep my skin in check early. This was also 1997, mind you—a time when acne commercials wanted you to literally set a salicylic acid bomb on your face in the name of clear skin, so, safe to say, acne knowledge was limited.

MORE: 101 Best Tips for Clear Skin You Should Be Following, ASAP

Throughout the next five years or so, my sister, the compulsive picker, would be called out the second her hands went above her neck. The same went for me for fear of a pre-adolescent skin freakout, and it barely took six months of reprimanding before I was conditioned to flinch any time someone touched their own face. I watched on, just assuming that any time my sister had a breakout, it was because she must have touched—and inevitably, picked at—her face. All throughout high school, I was dedicated to the cause: I’d only use those disposable sponge wedges to put on my moisturizer or makeup—we’re talking pre-Beautyblender days—and a washcloth to take it all off. There were zero exceptions, and I barely had so much as a whitehead. I know, I’m the worst.

But then came college, a time where my mom couldn’t yell at me for missing curfew or going to town on my face with abandon. (I really live on the edge.) I spent hours getting ready in cramped bathrooms where I was subject to an ungodly amount of airborne hairspray; I refused to buy the Beautyblender on principle—just don’t ask what that principle was—and instead took up finger-painting my face with probably-too-thick foundation every day. My skin went from clear and bright to oh-God-this-is-bad, and my dermatologist at the time told me it was probably my diet even though it hadn’t changed much since high school (except that I was probably drinking less jungle juice). I figured he was probably right, because there’s no way just touching my face every once in a while could make it go haywire.

When I called my mom complaining about my skin, the first thing she told me was—yep—stop touching it. I’m sure I rolled my eyes at the time, but I knew that if I wanted clear skin, I had to make a change or seven. The easiest change for a lazy college student? Listen to mom’s advice and keep eating $3 quesadillas as usual.

Almost a decade later, I’m still on the don’t-effing-touch-your-face train. I wash my Beautyblender every day. I’ve yelled at friends who rest their chin in their hands or put on their makeup with their fingers just minutes after they just touched their hair, then wonder why their skin just won’t clear up. (At least two friends and their skin have thanked me for this; the rest of them find it understandably annoying.) My boyfriend, also a picker, sometimes scratches at a pimple until it scars without even knowing it, realizing my deepest fear. I may be obsessed, but it’s served me well this long. Then last week, a mere 12 hours after I’d annoyingly removed my boyfriend’s hand from his face out of habit while we were ordering from Seamless, the beauty gods looked down at me on my good-skin high horse and smirked deviously: I woke up with an under-the-skin pimple. And it wasn’t just one of those wait-till-it-comes-to-a-head guys, either: It stuck around for more than a week, leaving me all the more time to wonder how the hell I managed to get a breakout in the middle of the summer, because I sure as hell would remember touching my own face. Something I ate? Did I try a new product? Should I make an appointment with my dermatologist to figure out what the hell went wrong? Three torturous days of thinking later, my boyfriend so casually informed me that I spent no fewer than four hours with my face resting on my chin during a particularly captivating Netflix HBO binge (“The Night Of”) the week prior, proving Naz is guilty of at least one thing.

MORE: This New Single-Ingredient Beauty Line Might Give You the Best Skin of Your Life

And it turns out, I’m not totally crazy: Dermatologist Annie Chiu says that while most adult acne is hormonal or genetic, it’s totally possible that touching my skin for a long time—something it’s definitely not used to—could’ve done it this time. Even though there’s nothing wrong with touching your face in theory, she says (i.e., after you’ve thoroughly washed your hands), Chiu doesn’t recommend it in practice: “The recurrent habits, like always brushing hair away from your face, resting your chin on your hand, or your face pressed against the cell phone screen transfers oils and dirt that may lead to clogged skin and acne breakouts.” And when’s the last time any of us washed our cell phone screens—or worse, our computer keyboards? We’re all gross.

Sure, nobody should have to feel the wrath that was my mother when I had an itch on my cheek in 1999, but if there’s one thing you can do for your skin by not doing anything, just put your hands down and leave it alone. Trust me (and my mom) on this one.