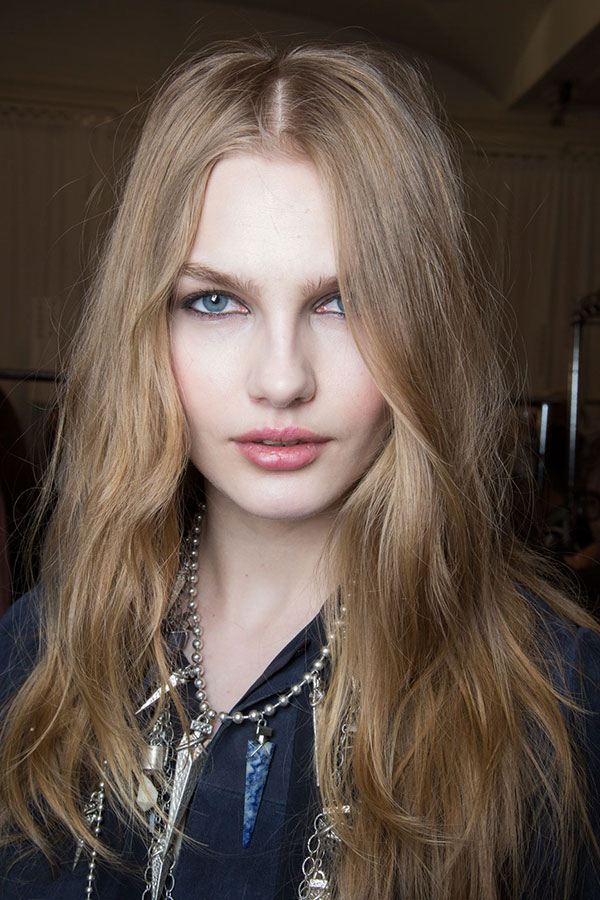 Don’t diss the days where you don’t have enough time to wash, blow-dry, and curl your hair or apply anything more than a clear, dewy (yet hydrating) lip balm. The “natural beauty” trend (or, in other words, looking exactly like yourself) isn’t going away any time soon. While some designers did go bold with intricate braids or pump things up in terms of eye shadow, graphic liner, and nail art (search Libertine or Tracy Reese and you’ll see), backstage at New York Fashion Week, there was a noticeable reoccurring use of barely-there makeup, hair that appeared like it had just been air-dried or, even better, done at home.

It’s important to remember that “no-makeup makeup” is quite different than this trend, as the latter has been known to be difficult to achieve and often ends up requiring a ton of product. The runway looks, however, feature minimal products and unconventional, relaxed or non-existent processes. This could very well be an argument for why runway trends have never been MORE wearable than they are now. See below for a few examples of where and how this trend showed up on the runway.

Hat Hair
At the Prabal Gurung show, hairstylist Paul Hanlon for Bumble and bumble created a hairstyle that kind of resembled what your hair would look like after taking off a hat, with a flat top and a wave that’s slightly dropped in the back. To do this, Hanlon explained that they did the hair, changing the texture to something a bit more done and then destroyed that texture with a beach spray to bring some natural edge to it without it looking TOO weathered. Hat hair on the runway? We’re into it.

Undone Waves With a Personal Approach
The hair approach at the Tory Burch show, which was inspired by the women of the late 60s and early 70s, is the exact definition of looking like yourself, as there was no definite process used to get the undone waves and texture the models debuted on the runway. Hairstylist Eugene Solomon explained that no model was the same and that they utilized a personal feeling in the models’ hair. “It’s a looseness and coolness. Nothing specific—everyone is quite different. That’s what is beautiful about it. They look cool and they look like themselves, yet they look like they go out together,” he explained.

Lived-in Makeup
The makeup at Tory Burch, while a bit more uniformed, took an undone, lived-in approach as well. After applying the neutral, chocolate-hued shadows, makeup artist Diane Kendal asked models to rub their eyes (something we ALL do throughout the day) to give it that deconstructed look.

Unique Frizz-Free Waves
Playing up hair personality was a thing at Coach this year, as well. “At Coach this season I left the hair as natural as possible and really played up the individual personalities of the girls. A lot of the shows this season want to keep the girls’ personalities–they don’t want armies,” explains Redken Global Styling Director Guido of the look he created at New York Fashion Week. This specific show featured a shiny, frizz-free, and textured wave that was air-dried. The rest of the process included creating a side-part and running Redken’s move ability 05 styling cream through the hair to take away fly-aways.

Girl On-the-Go Hair
The hairstyles worn by models at the first ever Banana Republic presentation are two you’ve probably quickly created in real life. Including a texturized low ponytail and an undone wave with one side tucked behind the ear, the two looks were meant to give off a “girl on the go” vibe.

Smudged Eye Makeup
Makeup artist James Vincent for MEHRON Makeup used designer Charlotte Ronson herself for the makeup inspiration at her NYFW presentation, which consisted of natural skin, a smudged smokey eye, and a lip with flush pigment. “The look is sort of a ‘morning after’ face,” he explained of his work. This creation was meant to look imperfect, but still give off that Charlotte Ronson cool girl vibe. A foundation product, two eye shadow hues, liner, a brow product, a finishing powder, and a lip cream were put together to create this look. Doesn’t sound too far off your morning routine, does it?

Textured Hair With Natural Ends
It was the first time the Jason Wu models ever walked down the runway with their hair down, but they did so in a real and relaxed way. Hairstylist Odile Gilbert for Kérastase Paris explained that they went for waves with a subtly sexy feeling that featured no volume on the crown and natural ends. On wet hair, Gilbert added in Kérastase Spray à Porter Buildable Texture Spray and blow-dried hair with a diffuser. She then parted hair and curled only the middle section of the hair—not the roots or the ends. To finish the look, she added in a texture spray, ran her fingers through the hair, and applied a hairspray for a light hold.

No Foundation
“There was this really cool girl who didn’t wear makeup, and if she did wear makeup, she definitely didn’t wear foundation. There was a rawness to them,” explains Maybelline makeup artist Yadim of the Sofia Coppola-inspired makeup look at this year’s Opening Ceremony show. With this look, Yadim didn’t even touch foundation but utilized a primer instead to give the models’ skin a bit of a glow. They even created a faux-dark circle effect, to give the appearance that the model was a bit tired, with a taupe shadow shade lightly applied under the eye.