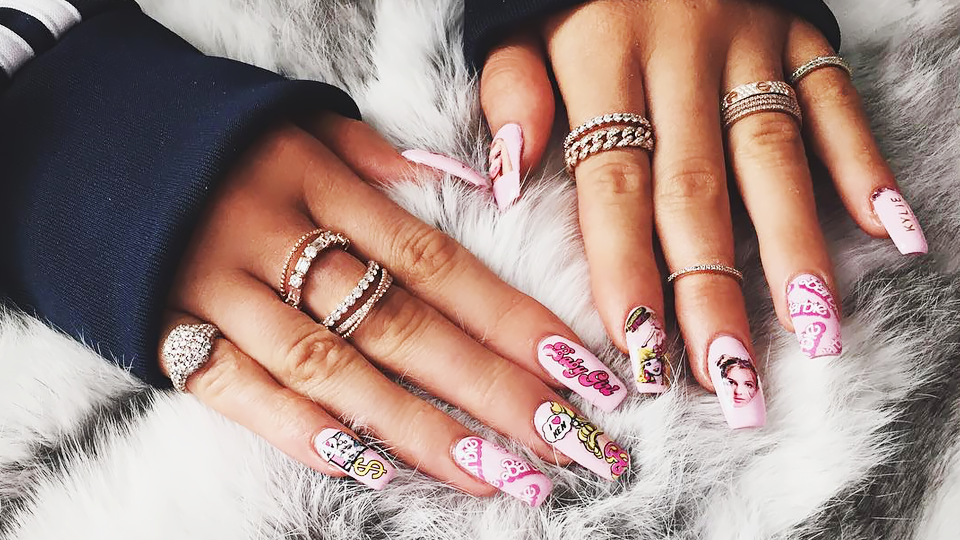 For about a year, I’ve wanted to try out fake nails. Like, really fake. I’ve long been a proponent of exaggerated nail art, even going so far as to have mini chains embedded over a gel mani once, just to match my favorite gold bracelet. But long, pointy nails were something I’d lusted over yet never really approached IRL. Chalk it up to Instagram for inciting my obsession: Everyone from Kylie Jenner to Rihanna—even subdued stars like Adele—have been sporting them. There’s something so gloriously tacky about the look—tacky is in now, people—and I’ve noticed real women (my friends, randoms on the subway) have started wearing eye-popping extensions, so it had me questioning if they’re starting to become the new normal.

Since I’ve never tried fake nails ever, I called up Valley Nails in New York City to make an appointment. I requested an acrylic set but was informed that the salon does a service called “nail extensions” rather than acrylics, because they’re healthier for the nail. Acrylics are applied with powder and UV, and are “refilled” as they grow out, while nail extensions are soaked off and reapplied as a new set to allow your natural nails to grow underneath.

When I went into the salon, the nail tech did all the basic mani procedures (cut, trim, buff, oil, and all that) before looking closely at my natural nails to see what shape nail extension she should apply. There are several different options, which are chosen based on the natural curvature of your nails. As a side note, the nail techs at Valley keep your nail size on file, so that if you come in again, the process will go faster. The nails came in a long, rectangular shape and were clear. She applied them with an industrial-strength glue, and then asked me for my preference in terms of length and shape. Obviously, I wanted to keep them as long as possible, and opted for the super-pointy “stiletto” style that I’d been dreaming of.

After that, my nail tech applied a glitter gradient using two different loose glitters. I was obsessed with the look, but I also learned living life with made-for-Instagram nails ain’t easy. Here, a few lessons.

Because nail extensions are plastic, a normal, non-gel polish is best.

When I originally scheduled my appointment, I asked for gel, but Valley told me that normal polish is actually better. It saves time (and money) and lasts just as long since the actual nail extension is plastic, and you don’t have the oils of your fingers to wear on it. It also dries surprisingly quick! I only waited about 10 minutes. So, the point of getting a gel is pretty moot.

I’ll probably never forget the time I finished eating avocado toast and looked down at the underside of my pointer finger’s nail—which contained a huge chunk of mushed-up greenness. So. Disgusting. And the only way you can really get the junk out is by scooping it with a Q-tip. #Chic.

The application is painless. Wearing them? Not so much.

I probably shouldn’t have chosen Fashion Week as my very first time for nail extensions, but I did. Having them as long as I did (the nail tech actually didn’t take any length off the originals, she just shaped them) caused some painful moments. At one fashion show, one of my nails got stuck to my coat as I was carrying it. I felt a shock of pain, and after the show I realized it had fallen off. Ugh. Luckily, Valley repairs any damage within a week. Another time, I opened a sliding cab door and my nail extension bent backwards slightly. I winced in pain and almost cried. The pain on that particular nail didn’t go away for the full two and a half weeks I wore them—and kind of led to my removing the set sooner rather than later.

Hand cream is a non-negotiable.

I’m not really sure why, but my nail area seemed to get drier than ever with these extensions. Applying a hand cream definitely helped, and even seemed to make the extensions themselves look shinier. I liked them better after wearing them for a full week.

Do NOT remove them yourself.

Most salons will remove nail extensions by soaking them in acetone. You can also do the same thing at home. When one of mine fell off one afternoon (this was after two and a half weeks), I kind of freaked out and pulled the rest off without using any acetone or remover. It was painful and left my nails damaged–about as much as a gel mani would. I wouldn’t recommend this! But I couldn’t stand the way it looked.

Typing and texting are a pain in the ass.

I had to teach myself to type with nail extensions. Admittedly, I got used to it, but it took time. The best method I learned is to type with the pointy tips of the nail. With texting, I still don’t think I learned. I used one finger, experimented with dictation (something I’d never used before) and in a moment of weakness, asked a publicist to type something for me. After I removed the extensions, the sensation of typing regularly was SO weird. It felt similar to when I broke my arm and had a cast removed. My fingers were weak and tingly when I tried to type normally, and I had to retrain myself to text with both my thumbs on my phone rather than one nail extension finger.

Overall, I loved the look of my extensions. It’s not something I’d want every day, but there’s just something so fun about looking down at long, glittery claws as opposed to ho-hum nails with boring polish. I was also surprised at the lack of comments from strangers. Whereas I thought I was wearing something ridiculously extreme, I didn’t receive any shocking stares or comments, driving home my suspicion that insanely long, embellished nails really are becoming the new normal.