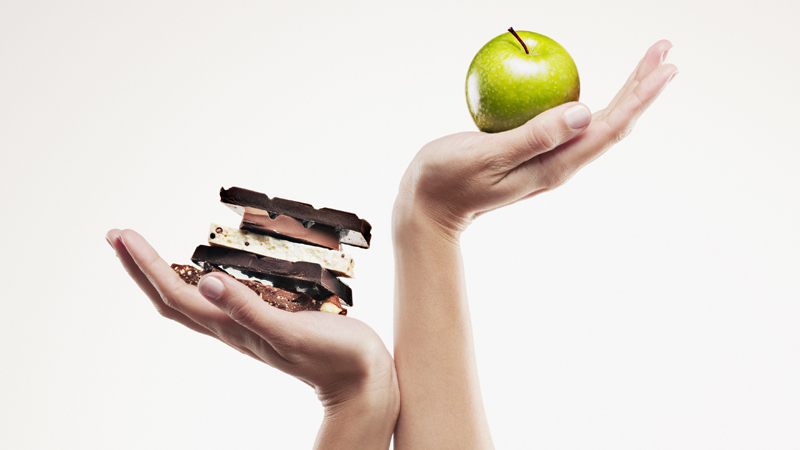 So you’re trying to drop pounds—you’re eating less, hitting the gym, and feeling strong and inspired. Yet for some reason, the number on the scale has barely moved. What gives? You might just be clinging to some faulty thinking about the right way to approach weight loss. If any of these beliefs sound familiar, kick them to the curb and read up on the right way to shed pounds—and keep them off for good.

1. Eating will make you fat.

Fat doesn’t inherently pack on pounds. In fact, foods that contain healthy monounsaturated fat, such as avocados, nuts, salmon, and olive oil, should actually be a regular part of your meal plan. The fat they contain has heart-healthy benefits, keeps you feeling full, and blocks cravings, says Brittany Kohn, R.D., nutritionist at Middleberg Nutrition in New York City. Fat is also necessary to help us absorb certain vitamins, which keeps your system balanced and healthy.

2. All calories are equal.

It sounds logical: Subtract a certain number of calories via dieting or exercise, and voila—instant weight loss. Not so fast. Calories in versus calories out is part of it, but it also comes down to what foods and nutrients the calories are coming from, says Kohn. Calories from natural, unprocessed fruits, grains, and lean meats will leave you more satisfied than processed, packaged items.

Little splurges here and there? Totally reasonable. But scheduling a defined “time off” from dieting once a week or one weekend a month can put you in a mindset where eating healthy is this temporary and negative thing you need breaks from. To really lose and keep off weight, you need to alter your lifestyle permanently by prioritizing healthy foods every day and not sweating it if you also treat yourself to a cupcake sometimes, says Kohn.

4. The less you eat, the faster you’ll lose.

Actually, the less you eat, the faster your metabolism will slow to a crawl—it’s your body’s way of trying to conserve energy. And that means that after losing some initial water weight, the scale is unlikely to budge much. Not only that, but some serious cravings will kick in, potentially leading to a big binge later. Weight loss shouldn’t be about starving yourself but trading unhealthy eats for good-for-you options that make you feel satiated and energized.

5. If you “mess up” for the day, you may as well keep eating whatever you want.

This kind of all-or-nothing thinking sets weight loss up to be an epic battle between you and the kitchen. Instead of letting yourself feel defeated if you’ve overeaten, just get right back on track ASAP.

6. You can eat as much as you want as long as it’s healthy.

Large portions of any kind of food—whether it’s salad or pizza—make your stomach expand so that it takes more food to fill you up and you consume more, says Kohn. In addition, some so-called healthy foods are too low-fat, low-sugar, and low-carb to be satisfying, leaving you craving more and also feeling tired and bloated.

7. If you’re not hungry at breakfast, you might as well save the calories for lunch.

You’ve heard a zillion times that breakfast is the most important meal of the day. But when you’re trying to subtract pounds, it’s even more crucial than you thought. “If you’re not hungry in the morning, it may mean you overate the night before,” says Kohn. Even though most people typically eat the majority of their calories later on, it’s actually smarter to consume more calories early on so that your body can burn the calories throughout the day.

Size Matters: How Much Fat is Healthy?
How Does Having Regular Cheat Days Affect Weight Loss?
5-Minute Breakfasts That Are Actually Healthy