You’ve heard of Immunocologie. Or better yet, you’ve seen it—all over Instagram, perfectly arranged in its minimalist glory alongside similarly tonal knickknacks and marble facades, just as god intended. And even though our moms drilled into our heads not to judge a beauty product by its packaging, here we are, with vanities filled with all-black or all-white or rose-gold-engraved bottles of vitamin C and pine bark and snail mucus serum. Or is that just me?

About that mucus serum: I started using Immunocologie’s line—specifically, the Vital Ionic Mist, the Super 7 Elixir, and the Night Protection, which add up to about half my rent—five months ago, partly because I was itching for a new beauty routine, and partly because someone said I’d be into the packaging. (I was.) I’m just shy of 30, and though I don’t have much crepiness to speak of, I quickly found that my skin was bouncier, brighter, and all over less tired-looking, which is more than I can say about most. I liked waking up in the morning to see if I could spot something change overnight. (I couldn’t, of course, because skincare doesn’t work like that, but I’m still using it nearly two seasons later, which is 90 percent longer than most products make it.)

And though you may have already heard about the Super 7 Elixir thanks to its buzzy, albeit gross ingredient—yep, that’s the snail mucus, which is packed with majorly beneficial nutrients for the skin—the rest of the line is just as solid. And the woman behind it, Immunocologie founder Karen Ballou, almost came up with the idea on accident. We spoke to Karen about the seemingly hippy-dippy ingredients in the products, what “natural” means to her, and exactly how she turned a Hodgkin’s Lymphoma diagnosis into a successful beauty brand.

What exactly was the impetus behind Immunocologie?

Eight years ago I was diagnosed with Hodgkin’s Lymphoma. It was an incredibly humbling time that resulted in a lot of changes in my life, including how I looked at the relationship between my skin and my body. I had an incredibly difficult time finding a skincare product that was as effective and luxurious as what I was using at the time, but which didn’t give me concern for what might be inside of it.

In addition to that, I felt most brands weren’t truly understanding the skin for what it is: the body’s largest organ and first line of immunological defense. As I went through treatment, my immune health was vital to my survival and I began to really look into the complexity of the immune system and most notably because of my background, what role does the skin’s immunity play in the body. What I discovered was not only that the skin’s immune health is essential to our overall health and wellness, but also that a whitespace existed in the market to make a skincare product that was as natural, efficacious, and luxurious as it was beneficial to the immune health of the skin with full transparency.

But we encounter so many different things throughout the day. What made you think that it was the cosmetic products you were using that were causing trouble?

I wasn’t necessarily certain that skincare products were in fact a part of the cause for my diagnosis, but I’ve spent the majority of my career in skincare working behind the scenes on product formulations and brand development and with that comes a certain knowledge about how ingredients are made and what they can do. Though the skincare industry is starting to make a tremendous shift toward natural, for years we weren’t able to produce so-called natural products at scale mainly because the resources and technologies either weren’t there or not developed enough. That meant synthetics, in many cases derived from petroleum, became a standard. Even though the FDA doesn’t regulate skincare as being trans epidermal, we now know 60 percent of what is put on the skin is actually absorbed by the body. So with all the research that’s now come out around ingredients like phenoxyethanol or methylparaben for example, I wanted to make sure I wasn’t taking any risks with my health, or contributing further to its potential decline. 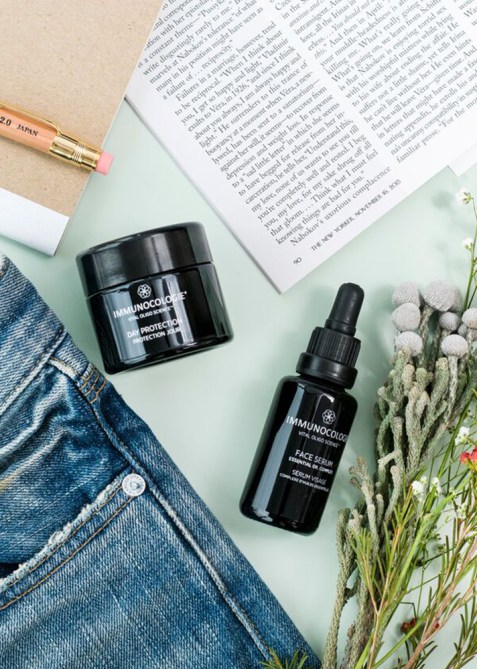 What other changes did you make when you discovered your lymphoma?

Well for starters, my diet changed drastically. I cut out red meat, all processed foods, increased my water and supplement intake, on top of all the medicine I was prescribed. I also started exercising regularly. It also just helped me mentally by maintaining focus on beating this disease.

Tell me a bit about why you use clay in all your products.

When I was diagnosed, it was recommended to me that I should drink a tablespoon of raw earth clay every day to help calm inflammation in my skin and in my lymph nodes as well as detoxify my body. I knew clay was incredibly mineral rich and detoxifying, however, I was skeptical I would see any real results given the treatment I was receiving. A week or so later, the inflammation had calmed drastically and my skin tone had evened to the point my treatment partners were in awe and asking what I was doing. It was at that point I knew given my background in formulating that we needed to harness this wonder ingredient into a skincare product that could help provide those same nourishing and detoxifying minerals to the skin.

I reached out to some contacts and it turned out a peer had been working on developing a natural skincare delivery system using the ionic and mineralizing powers of raw earth clays that not only drastically limit the amount of synthetics included in a product without reducing its efficacy, but also help support skin’s immune health with the natural minerals found in the clay.

So how do you use it, exactly?

It’s not what you might expect: It’s not actually clay that is the core ingredient, but the minerals found in clay which play a vital role in the body and in the skin. And because the skin is naturally incredibly difficult to penetrate as an immunological defense mechanism, we have to make sure what we put on it is small enough to effectively penetrate. The clay minerals allow us to do that. So what we’ve done is created our very unique delivery system called Vital Oligo Science, which consists only of minerals extracted from French green clay converted into nano-particles, then encapsulated in purified water and physically emulsified with the active ingredients to penetrate into the skin and give the desired results. The minerals also contain negative ions which help to reduce ionic instability in the skin that can accelerate skin aging. So though clay in some cases can be drying, which is not necessarily a bad thing, the products themselves use the mineral benefits of the clay to provide the results our clients seek. 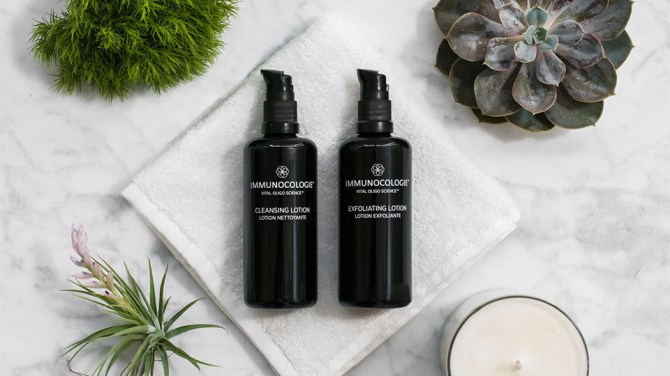 What about the ever-popular snail mucus?

Snail mucin is a fascinating ingredient mainly because it contains an enzyme that helps skin cells turnover and regenerate new skin in a way that when applied, will reduce fine lines and wrinkles and even help to heal scars. Snails, because of the environments they exist in and the textures, have incredibly resilient skin, so much so that if you put a snail on the blade of a sharp knife, it wouldn’t cut itself because its skin cells regenerate so quickly. We’ve been able to bio-engineer this and include these benefits in one of our hero products.

Another great ingredient is our African desert date seed oil which we sustainably and equitably source from Burkina Faso in west Africa. It’s rich in vitamins A and C as well as essential fibers and also works incredibly as an anti-inflammatory.

Why is Immunocologie 99 percent natural? What’s stopping the other 1 percent?

We’re 99 percent natural because we use two food grade preservatives throughout the line, benzyl alcohol, which we source from beets and sodium benzoate. It’s important that we’re fully transparent about what’s in the product and we’re proud to be able to share that kind of information with our clients because it creates trust and that’s how we believe business should be conducted. For us, the term natural has become diluted though and it’s creating more convolution around an already convoluted industry. There are brands in the market that call themselves natural because they use a few essential oils, but then pair them with chemical synthetics which can reduce the benefits of those oils.

The goal of Immunocologie is healthy skin over anti-aging. Why did you decide to formulate the products in such a way?

The truth is, we’re all going to age, no matter what and preventing aging is not synonymous with being healthy. When you’re not healthy, you don’t look or feel at your best and many times it’s when we’re not taking care of ourselves properly that can contribute to accelerated aging. Though when we take care of ourselves, when we eat well, exercise, invest in our well-being, we look and feel at our best. So we as a brand don’t believe in formulating skincare products that focus on the inevitable, but instead focus on understanding the root cause of what creates good skin, its health, and finding the right ingredients that contribute to its long-term vitality and ultimately its appearance.

MORE: How Long Does it REALLY Take for Skincare Products to Work?