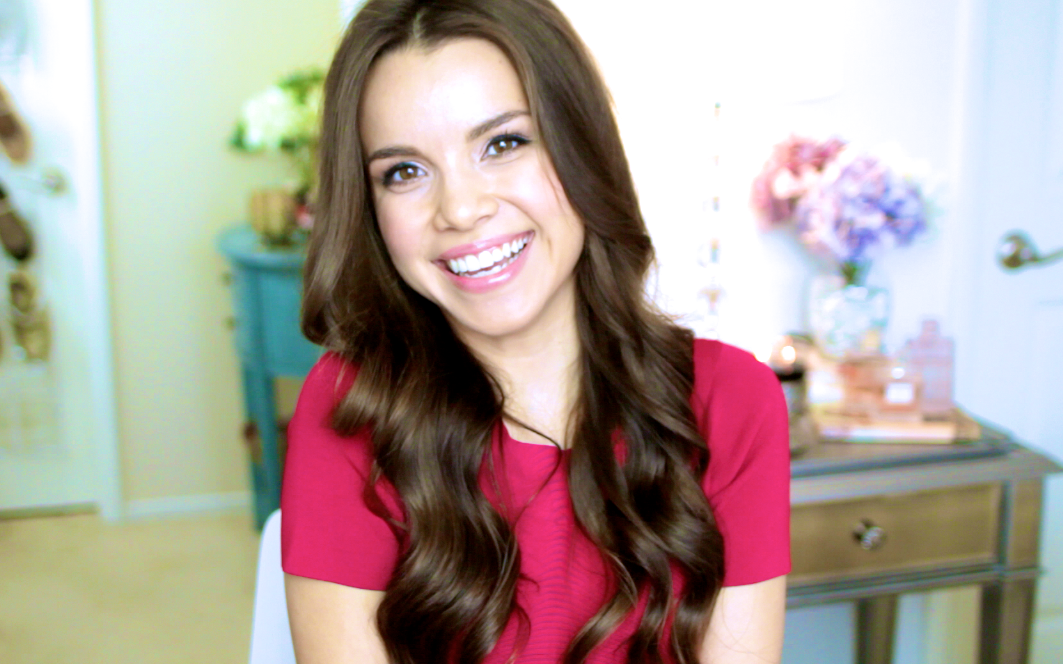 With over two million subscribers on her YouTube channel, it’s hard to believe that Ingrid Nilsen — better known as MissGlamorazzi to the vlogger world — was ever shy in front of the camera. Sure, she’s got five years of experience and hundreds of videos under her belt, but the now-famous YouTuber started with humble beginnings. Creating her channel as a personal challenge to herself to get over her fear of being on camera, Nilsen started with a (now taken down) video of herself wielding a curling iron, and has become such a phenomenon that she’s landed a deal with COVERGIRL Cosmetics as a Glambassador for the brand.

Her partnership with the brand, announced today, — on National Lipstick Day, no less! — will kick off a series of video content on the MissGlamorazzi YouTube channel, focusing on bringing out the inner COVERGIRL in Nilsen and viewers. We got the chance to chat with MissGlamorazzi about her channel, overcoming her fears of being in front of the camera, her COVERGIRL partnership, and more. Read on below!

Beauty High: What made you start creating beauty vlogs on YouTube?
Ingrid Nilsen: I started because I was trying to overcome a fear of being shy and being afraid of talking to people.  I had made a goal for myself to do things I was afraid of doing. Being on camera was number two (next to spiders) so I really just wanted to come out of my shell. I decided I was going to post a video on YouTube. I had seen other girls talk about makeup, and I was just getting into makeup at the time, and I wanted to combine something I was interested in with something I was afraid of.

It was a “cease the moment” moment at 3:00 AM when I created my channel, hence the name [laughs]. The first video was shot at night time a day or two later, and it’s not actually up on my channel anymore. It was me curling my hair, and it was really, really dark in my room. You couldn’t see anything and I wasn’t saying much, so it was like me curling my hair in a bat cave. I took it down pretty early on. At the time, I was just thinking, “Oh my gosh, I just need to take this video down.” It’s one thing I wish I had kept. I wasn’t thinking I’d be doing this for years.

So what was the turning point when you stopped being afraid of the camera and started loving it?
It happened within the first few months. I became more comfortable with it. I noticed how much I loved to create videos and it was a nice little escape for me to be able to talk about makeup products when I didn’t have so many people to talk to about them with. I met other people creating videos, and it was kind of hard not to love it. It was natural, and now I’m sitting here with CoverGirl.

Has your set up become more sophisticated since the days of “curling your hair in a bat cave”?
I have a complete set up, and I’ve gotten everything down to a science. I can collapse my lighting down and keep it in my closet so my apartment doesn’t look like a filming studio when people come over. On shoot days, it definitely looks like a studio, but now I can keep everything in my closet when I’m not using it.

When you realized you could start making this your full time job, what steps did you take to become a professional vlogger?
It was after the first year that I started thinking, “Well maybe I can take this further,” because I really loved it. I’m all about taking calculated risks. I just knew that if I dedicated 100% of my time to it, I could make it grow, and I didn’t want to be in a position where I said, “What if I hadn’t tried? What if I didn’t make this bigger?” I signed with a network, and we have a great relationship. They were a big part of helping me turn my hobby into a career and making it sustainable. It was Sarah Penna from the Big Frame network who reached out to me, and it was around the time when networks were popping up all over the place. When I talked to her I had this gut feeling that it was going to be a good fit for me, and I went with my gut.

Now that vlogging is your profession, what’s a typical day like?
Every day is different! Right now I shoot three days a week. Full shoot days at the least are six hours long, and can go up to 12 hours long. It’s a process just shooting the videos, ad there’s a lot of planning that goes into that. The planning happens before that, so on two separate days of the week, I’m usually planning for other videos, answering emails, editing, and doing all of the other stuff. A lot of the time my weeks don’t end where the weekends begin. I try to give myself some time on Sundays to binge watch Netflix. I’m currently in the second season of “New Girl” and I love it.

MORE: Nicole Guerriero Talks YouTube as a Career, Her Weirdest Comments, and More

When you’re planning out your videos, what are the most important elements that come into play?
It really comes down to having a good idea. At the beginning of everything, for me, is coming up with a concept. Everything kind of works together, and you want to make sure everything is good. But for me, it really starts with the idea, and the products, and the way that it’s shot, and all of that comes into play. As for idea inspiration, it’s a little bit of everything from everywhere. I listed to what my viewers want, and I get inspiration literally everywhere I am. I’m always taking notes and writing things down. I can be out and pull out my phone for random notes. I have a running list of ideas at all times.

What’s been your favorite tutorial to date?
Actually, the one that’s going up today! [Video above] It’s announcing my partnership with COVERGIRL as their official Glambassador! I’m really proud of the tutorial, because I got to use really awesome products, and it’s a Back to School look but it’s not the traditional super natural makeup look. It’s more fun, but still wearable. It’s all about awesome products, like having a really good base with the COVERGIRL Ready, Set, Gorgeous Foundation. It lasts all day, give you oil-free, natural coverage, and it’s great for teenagers. When you’re at school, you want your makeup to last all day, but you don’t want super heavy coverage. Besides that, it’s about sticking with natural cheeks, a pretty lip color, and then a colored liner on the eyes. A little more fun than traditional.

Can you tell us more about your partnership with COVERGIRL?
Yes! I’m a Glambassador for COVERGIRL, which means that I get to make really awesome content with them and I am going to be getting inside scoOp on new products. What I really love is that I get to be a part of the COVERGIRL family. They’re really inclusive and want everyone involved, and it’s going to be an experience for me and my viewers together. It’s about bringing everybody together to celebrate your unique inner CoverGirl.

Considering it’s National Lipstick Day, what’s your signature lip color?
I’m actually wearing it right now. My signature lip color (I keep grabbing it because I’m so attracted to the color) is COVERGIRL CoverLicious Lip Gloss in Succulent Citrus. It’s coral, it tastes good (which is so important to me), and the color is so pretty and looks very natural when you put it on.

For more from MissGlamorazzi, head over to her YouTube Channel!

For more from COVERGIRL, head over to their YouTube Channel!