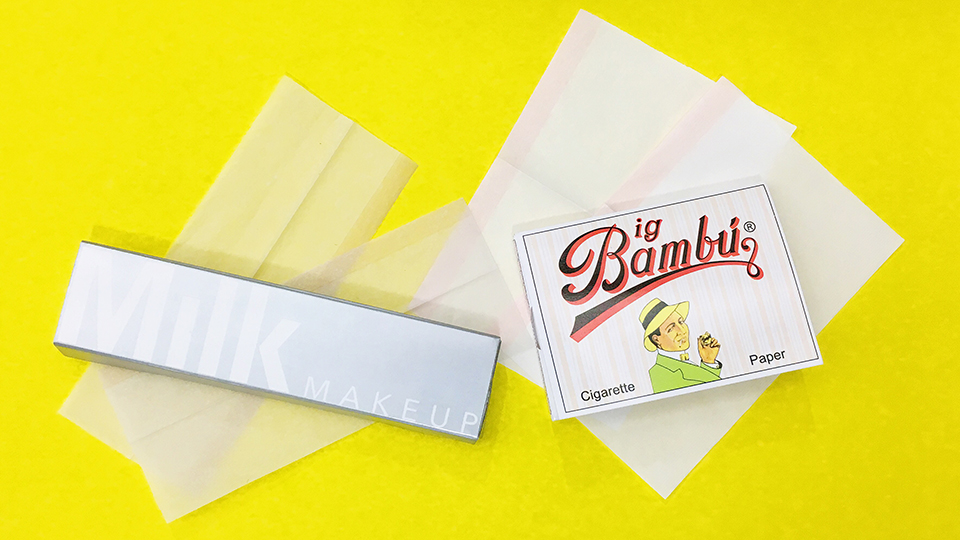 Allow me to let you in on a little (former!) stoner beauty secret: I’ve low-key been using rolling papers to blot my oily skin for years. I can’t roll a joint (that’s what boyfriends are for), but I discovered this “trick” when I was in high school and lived and died by my Clean & Clear Clear Touch Oil-Absorbing Sheets. I’ve been hoarding $1.50 packs of papers for no other reason ever since. Specifically, RAW Organic Hemp papers: Hemp is super absorbent, so not only is this off-label use way cheap, but it’s more effective than most cosmetic blotting papers, too.

When Milk Makeup, the ultimate in cool-girl cosmetics, launched a few weeks back, everyone subsequently freaked out about its Roll + Blot papers. As the name suggests, these are papers that are equally as effective for rolling as they are for blotting, and retail for $10 for a pack of 100. They’re also made of pure unbleached hemp fibers—just like those RAW Organic Hemp rolling papers I love so much.

That’s when it hit me: Do people not know that this is a thing? Am I one of just a few oily-skinned persons who once had the (in fairness, slightly absurd) notion to press a rolling paper against their greasy face and see what happened? Am I an innovator? Could I have packaged this and sold it and made billions of dollars?

I’m not a marketing whiz (and whoever is behind Milk Makeup definitely is, that’s for sure), so the answer is probably no. But it’s definitely a genius move by the brand, and I’m frankly surprised nobody has done it before. Does nobody else in the beauty industry smoke pot and have oily skin?

At first, I thought it was laughable that they were charging $10 for something you could get for less than $2 at any corner bodega, but because there are 100 sheets in each pack, it’s actually not a terrible deal. Sure, you can get four 32-sheet packs of organic RAWs for $6.95 (that’s 128 sheets total, and I most definitely used a calculator to figure that out), but the magic of the Milk version is that they’re inconspicuous. They’re cute. They’re presentable. You don’t have to worry about the stigma associated with pulling a pack of rolling papers out of your bag in public, even if you’re just using them to blot your face, promise.

Full disclosure: I can confirm that the Milk iteration absorbs oil just as well as the papers it’s based on, but as for their use as rolling papers, that I’m not so sure about, even though they use exactly the same material. RAWs, on the other hand….