ICYMI, Miley Cyrus was the musical guest on SNL (her seventh time!) with Elon Musk as the controversial host. We think Cyrus stole the show and not just because of her incredible mohawk. Yes, a mohawk. She rocked the style both on the streets of NYC and while performing the title track from her latest album “Plastic Hearts,” as well as her collab with The Kid LAROI “Without You.” She killed it.

Cyrus wore her blonde bangs choppy with a ton of volume while wishing her mother Tish and godmother Dolly Parton a Happy Mother’s Day. You can see when she moves her head, her hair is in a small faux-mohawk and the rest of her hair is pulled into a sleek pony. Who would have thought this could look so cool?

Of course, this isn’t the first time Cyrus has gone for a punk-style haircut. She recently made a shaggy mullet look chic as hell. She’s cut her hair at home with the help of her mom, as well as played around with bleached blonde color. She likes to experiment.

You can see the style in all its glory while Cyrus was signing autographs out in New York City. We don’t know which hairstylist is responsible for the ‘do but it’s seriously impressive the way it has height but is also sleek and chic. 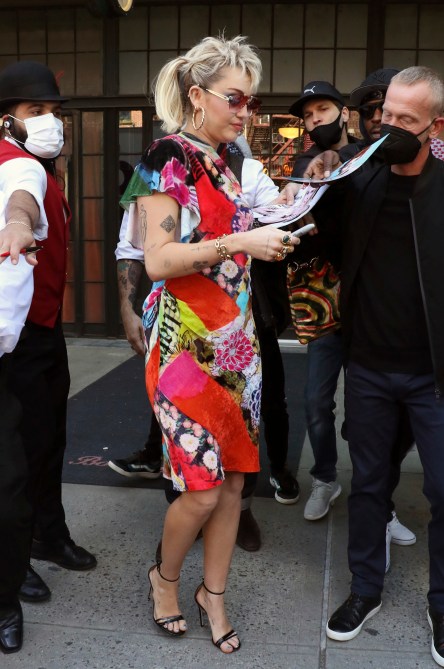 She paired the look with a colorful midi-dress, which seems a bit low-key for the superstar, as well as tons of gold chunky jewelry, black heeled sandals and oversized sunnies. She looked like a musician from the ’90s—which is a great thing, of course. That’s what makes Cyrus such an icon. Very few people could put all these pieces together and come out with a look that begs to be talked about in the best way possible.