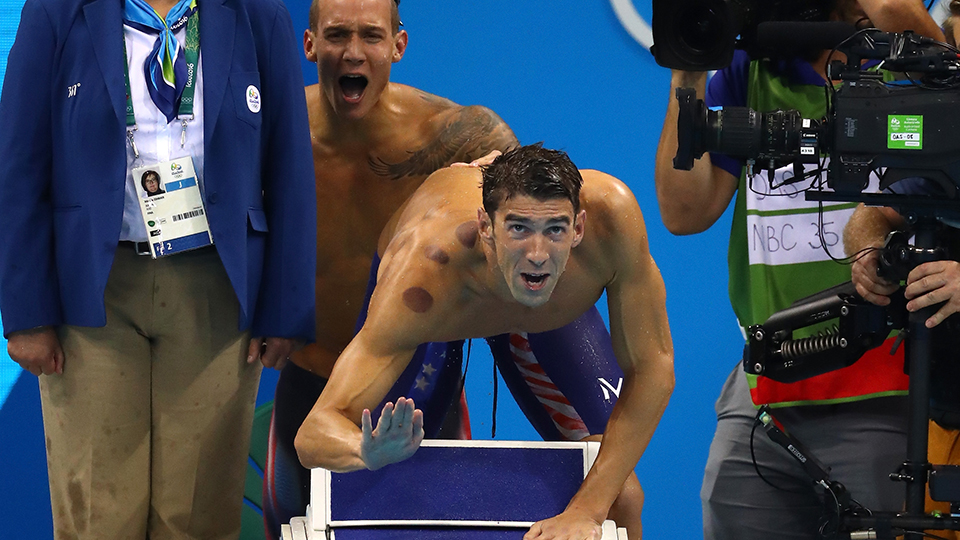 Michael Phelps won his 19th Olympic gold medal on Sunday for doing good swimming, but his victory wasn’t the only thing that had people talking. The man who is good at swimming also raised questions when he removed his warm-ups to reveal large, dark circular bruises on his shoulder. Confirmed: Phelps has been getting cupped.

Anyone who has ever hate-read an interview with well-documented cupping fan Gwyneth Paltrow already knows what’s going on here—as does anyone who follows Kim Kardashian on Snapchat, where she shared the details of her own cupping experience just last night.

But for the uninitiated, cupping is a form of alternative physical therapy that involves using heated glass cups to suction the skin and create a vacuum, which is then released. The line of thinking is that the suction stimulates blood flow to the area and helps relieve muscle soreness and pain, which is why Kim has turned to the treatment in an effort to ward off neck discomfort.

Though it comes from the same school of Eastern medicine as acupuncture, cupping hasn’t become quite as ubiquitous, which probably has something to do with the telltale bruises it leaves behind—and the fact that there’s no scientific evidence whatsoever that the practice has any medical benefit to speak of. Many experts believe it’s essentially the Chinese lettering tattoo of alternative medicine, including Dr. Terry Dubrow, M.D., who discussed cupping with Andy Cohen on Watch What Happens Live last night. “It’s total B.S.,” Dubrow said.

Dr. Robert Glatter, M.D., an emergency physician at Lenox Hill Hospital in New York and a former sideline physician for the New York Jets, agrees that there are few benefits to cupping, if any at all. Glatter told USA Today, “It’s a hickey, to be honest. What you’re getting is a large, circular hickey.” But he does acknowledge that there’s a placebo effect that comes into play: “When people feel better, they may perform better.” So that explains how Phelps got 19 gold medals, and how Kim got 12 (and counting) seasons of Keeping Up with the Kardashians.