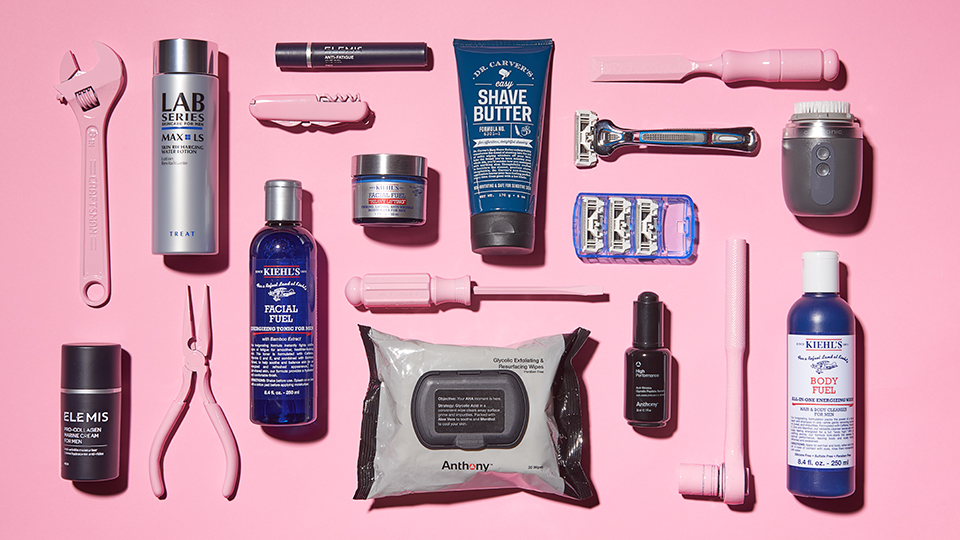 I recently became obsessed with my husband’s razor. It’s one of those Mach 3 situations that makes my legs smoother than a standard-issue Bic Soleil disposable ever did. I also recently brought home a tube of Clinique men’s anti-aging cream from work and ended up using the entire thing and using a scissor to rip it open so I could scrape out one last use. Two facts that are seemingly unrelated—a razor and a moisturizer have nothing in common—but both these products visibly work for me, while being explicitly marketed to dudes.

I’ve read articles that claim men’s products are completely different from those made for women—a man’s skin is thicker, more oily, hairier—but after four weeks of exclusively using men’s scrubs, creams, tools, and serum, I’m not really sold on the idea there’s that vast a difference outside of marketing and packaging. The grooming industry—valued at $6 billion in the U.S., FYI—has clearly figured out what women have known for eons: men are remarkably simple creatures who might sooner die than walk up to his local Estee Lauder counter and buy a serum, but as soon as it’s put in a navy, gray, or black bottle and festooned with words like “fuel,” “power” or “heavy,” he’s willing to shell out the $70, no questions asked.

Still, I had a sneaky suspicion there might really be something to these products—many are less money than those made for women (thanks, pink tax!), and many are formulated with the same key ingredients including glycolic acid, caffeine, hydrolyzed rice extract, and AHA.

I decided to put that theory to the test, by replacing my entire skin-care routine with products made for men. Here, I break down everything I used, and whether I plan to stick with them (hint: I do, for quite a few). 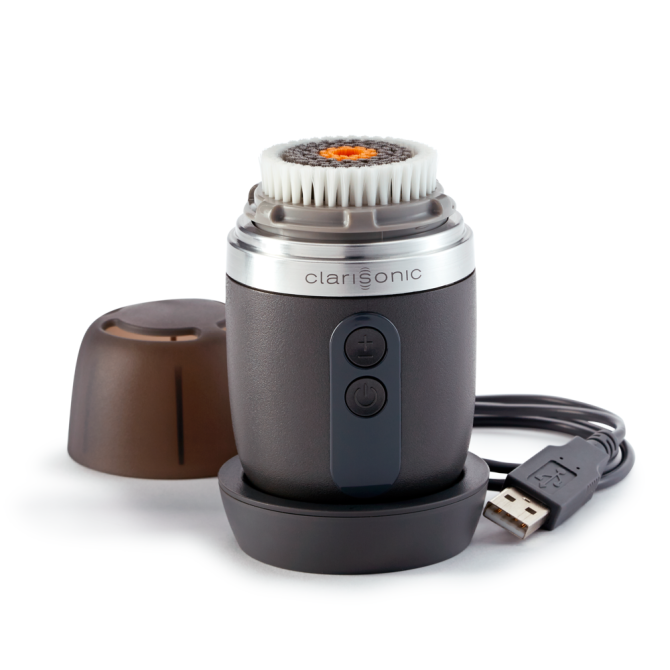 I’ve long been singing the praises of my Clarisonic Mia, a cute little pink skin-cleansing brush that I credit with reducing my pore size and overall improving my skin’s evenness, so when I heard a men’s version existed, I was eager to use it to anchor my new routine.

What makes it manly: It has shorter bristles (“for men’s resilient skin” says the website) so it’s able to get closer to skin.

I used the tiny handheld rechargeable tool every other night for entire month and found myself loving it more than the Mia because the shorter bristles penetrated my skin better and removed all traces of makeup. My pink Mia never gets it all off.

Am I keeping it in my arsenal? 100 perrcent, yes. I’ll be exclusively replacing my Mia with the Alpha. 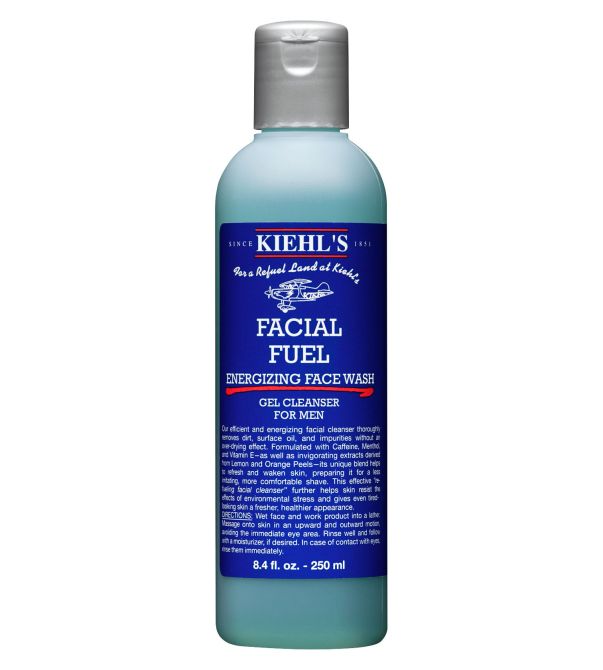 On the nights when I’d use the Alpha, I’d pair it with this Kiehl’s face wash, which has a thick, gel-like consistency. Before, I always used cleansing oils, but couldn’t find one explicitly marketed to men.

What makes it manly: The fact that it’s blue? And, presumably, that it uses caffeine and “invigorating citrus extracts” to wake up skin.

I appreciated the wash’s zesty, slightly menthol scent although might have liked it more if I used it in the morning instead of before bed. And while it did remove my makeup in tandem with the Clarisonic, I found it too soapy, almost like a shampoo for my face (which, in essence, it is—it’s made with sulfates) and felt it was stripping out moisture.

Am I keeping it in my arsenal? Although it didn’t negatively impact my skin in a real way—no breakouts, no flakiness—I’m going back to hydrating cleansers and oils. 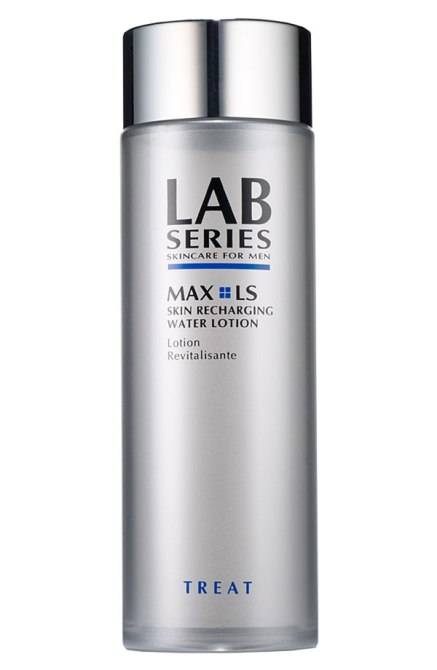 I’m a hard-core micellar water devotee, so I was pumped to try this non-rinse balancing lotion, which promises to remove gunk while making skin look younger and generally better.

What makes it manly: Nothing other than the fact it’s by Lab Series, a made-for-men line. The ingredients—green tea leaf extract, algae extract, and hydrolyzed rice extract among them—aren’t anything a dude would specifically require.

On days when I wasn’t washing my face with the Clarisonic, I’d use a few squeezes on a cotton pad, and found it removed dirt and makeup fairly well, while hydrating nicely. However, I felt I still needed a moisturizer right after, which I don’t with Orico’s Orange Micellar Water, the miracle product I normally use. 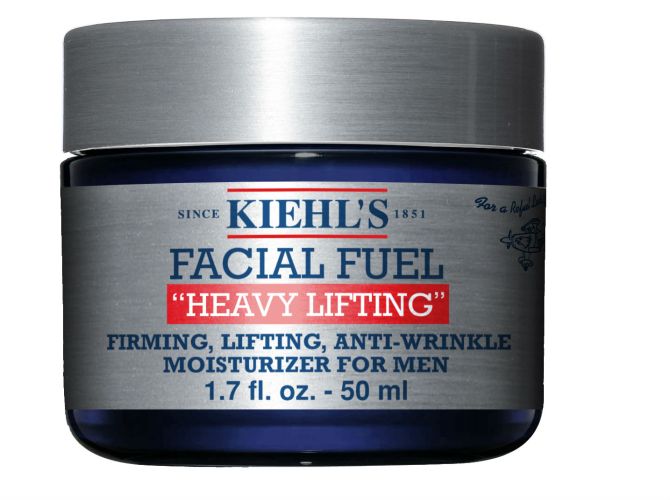 I used this every single night, and sometimes in the morning if I woke up with dryer-than-normal skin.

What makes it manly: Caffeine, and the fact that it’s called “heavy lifting.”

Although I wasn’t a fan of the corresponding face wash, I really like the moisturizer. It’s not too thick, and I actually felt it absorbing into my skin, not just sitting on top. And after four weeks, my skin is starting to look a little more elastic, likely thanks to dimethicone, a silicone-based polymer that fills in fine lines and provides a protective cover on skin, locking moisture in.

Am I keeping it in my arsenal? Yep. I’m going to ride this one out and see how my skin looks after another month. 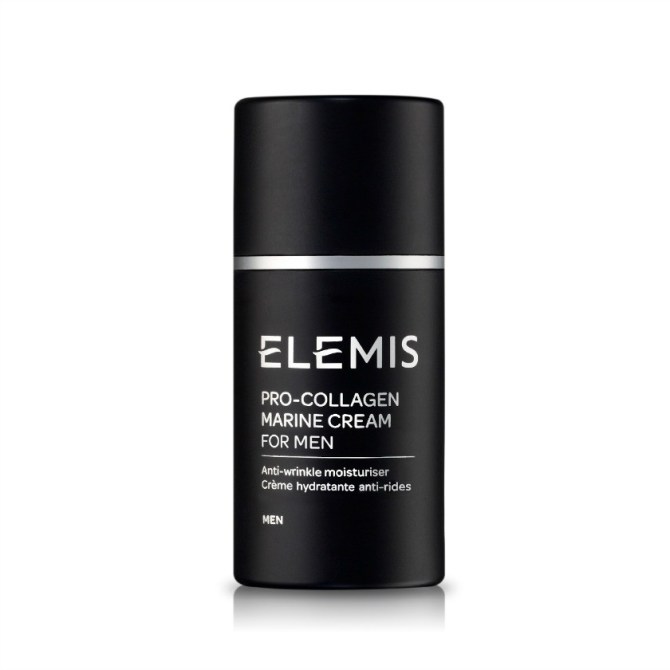 I absolutely adore the women’s version of this cult-favorite cream, so I was planning to use the men’s formula a few times a week but—gah—had to stop right away due to the overpoweringly strong “cologne” scent. After applying, I smelled like I just took a stroll through the men’s fragrance aisle at Macy’s, which might be a perk for guys, but not for me. The cream is nice and soft though. 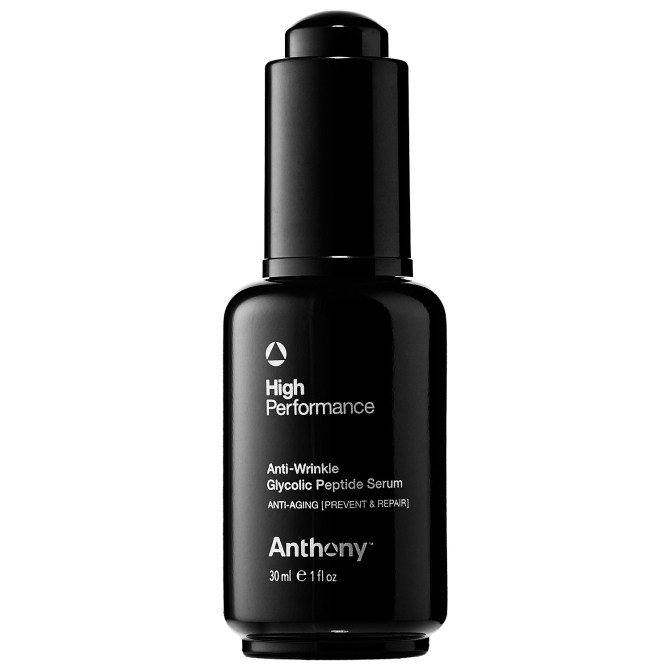 Before moisturizer, I used this serum almost nightly and was pleasantly surprised by how well my skin adapted.

What makes it manly: The packaging, mostly.

This serum is packed with skin care MVPs including buffered AHA, peptides, and seaweed extract, all of which are meant to give skin a jump-start, while glycolic acid exfoliates. After about a week, my skin looked more even when I woke up and noticeably hydrated.

Am I keeping it in my arsenal? Yes—I’m not moving this bottle from my nightstand. My favorite product I used, and one I plan to tell other women to check out. 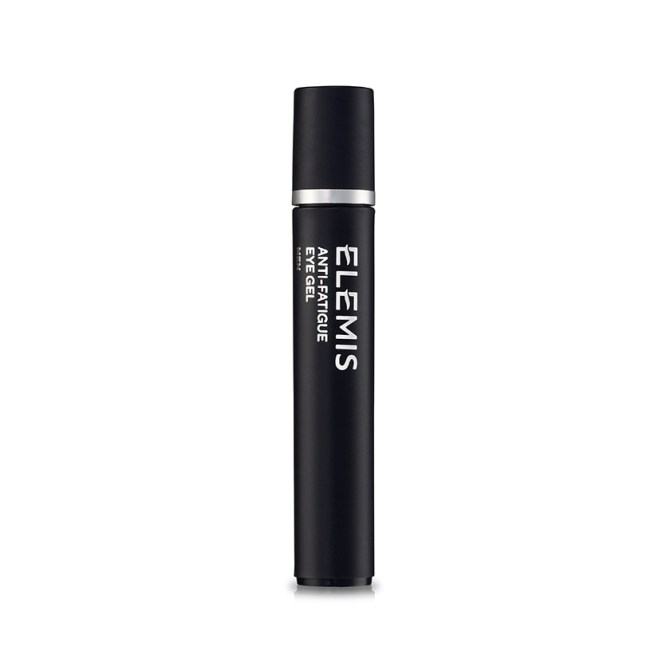 An eye gel that comes with a cooling metal roller ball applicator, which I applied nightly (and mornings when I looked especially tired).

What makes it manly: The packaging, that’s all.

I’m a rocker for metal applicator, and loved the feeling of applying this gel made with sugar beet, yeast, and golden root to reduce the appearance of puffiness and dark circles, while British White Willow and magnesium-rich olivine is meant to hydrate. While I didn’t see any visible changes in the super-fine lines starting to form around my eyes, it did de-puff and hydrate fairly well.

Am I keeping it in my arsenal? I’ll keep it on hand for those mornings after I’ve eaten too much salt (or had one too many glasses of wine), but I’ll probably go back to using my ROC Retinol Correxion Sensitive Eye Cream on a nightly basis. 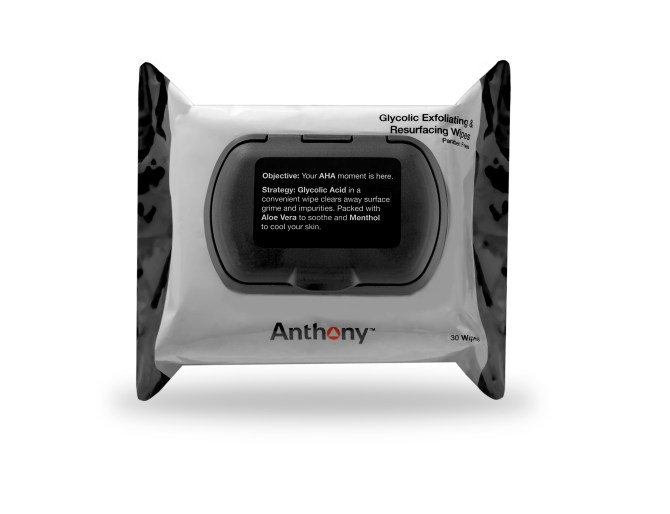 Full disclosure: I only used these disposable wipes a few times on my face, mostly on weekend nights when I was too lazy to give it a full wash, but I did use it on my hands, my elbows, and my knees every other night to smooth dry skin.

What makes it manly: The packaging, and the fact that it has a strong menthol component to cool guys’ skin.

I felt like these were the masculine version of Bliss’s $49 That’s Incredi-Peel Glycolic Resurfacing Pads, which I’ve always really liked. And at $18 for 30, it’s more than half the price for the same amount of product.

Am I keeping it in my arsenal? I plan to keep these at arm’s reach when I’m too lazy to wash my face and layer several creams, although will probably use the brand’s serum—also made with glycolic acid—more regularly. 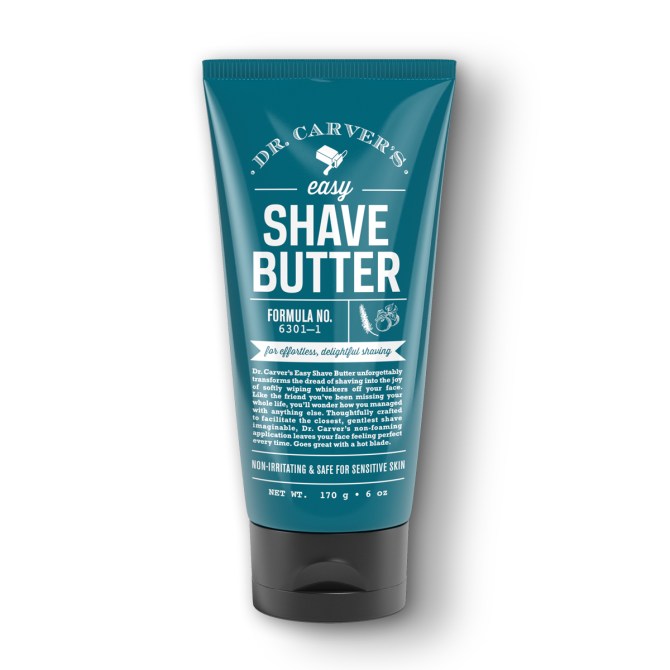 I loved shaving my legs with this stuff—more of a gel that breaks down on skin than a traditional “butter”—and felt like it really worked.

What makes it manly: Pretty much everything about it, including the fact it’s meant for facial stubble.

I kept this in the shower and used to shave my legs and under my arms, and appreciated the unique texture, but I didn’t see a noticeable difference between Dr. Carver’s and whatever other stuff I manage to have lying around.

Am I keeping it in my arsenal? Until it runs out. I will, however, insist my husband tries it on his face, where it’ll probably be more effective. 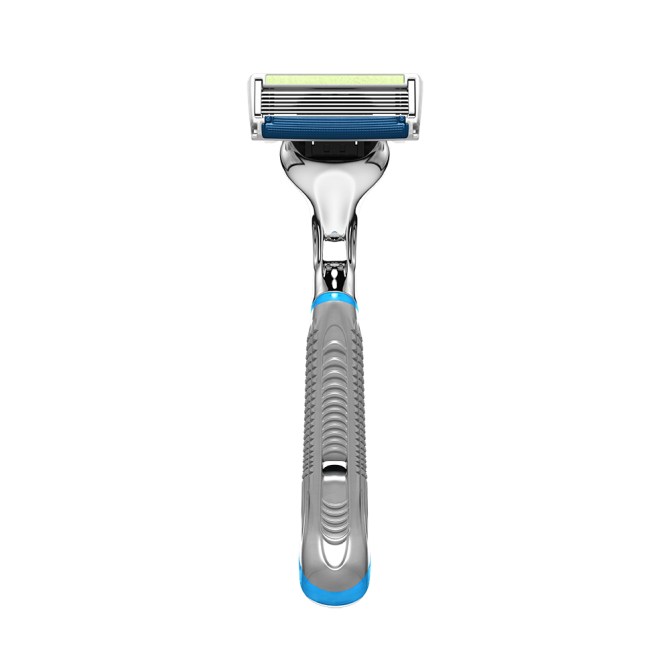 What makes it manly: It’s geared toward men, yes, but also proclaims to be “your girlfriend’s new razor. Or your boyfriend’s. You see, the 4X is also known as the Lover’s Blade. It was designed to satisfy the harshest critics of both genders.”

It did what it was supposed to do, although didn’t remove hair as swiftly as the Gillette men’s razor I’d been using—I had to go over the same area a few times.

Am I keeping it in my arsenal? I’ll definitely use all four blades, but after they’re dull, I’ll happily resume swiping my husband’s Mach 3.