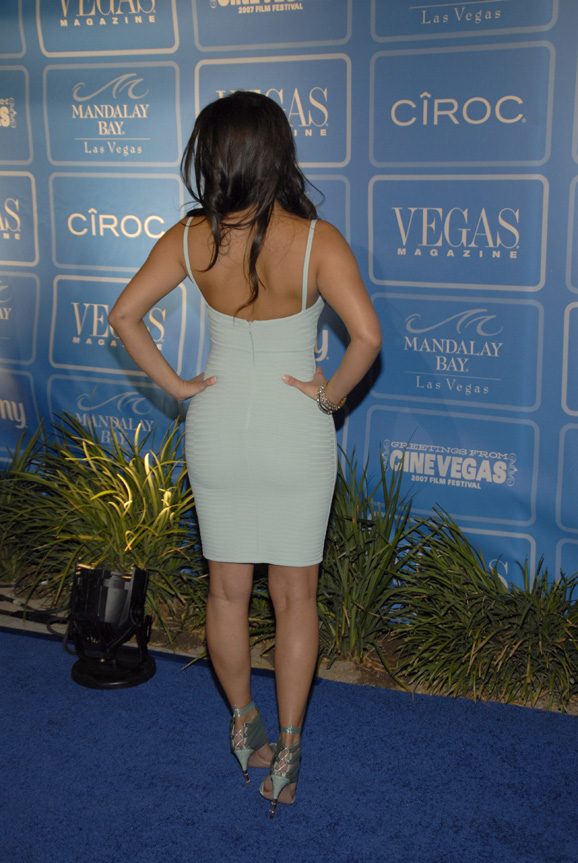 No matter what you call it—booty, junk in the trunk, cake, bootius maximus, or round derrière—there’s no denying butts are having an especially, well, big moment right now. To celebrate, we’re dedicating the week to all things ass-inspired—famous celebs with Internet-breaking booties, specialized workout plans, style tips, random trivia, confidence-boosters, and more. Welcome, readers, to Butt Week.

My bottom is large and round. I have a 26-inch waist and 38-inch hips. I work out four times a week, and most would say I’m fit—but my butt ain’t going anywhere.

I’ve accepted the word fat. When you have a big butt, people throw that word at you a lot. I’ve learned to ignore trainers who claim they can work it out. They can’t. The more I squat, the more it grows. In fact, the lazier I am, the smaller it gets, and softer, and just a bit saggy.

I’ve always had junk in my trunk. When I was eight years old, 50 pounds soaking wet, my family joked that I looked like I was wearing a diaper. And that was before butts were cool.

If J.Lo didn’t blow up during the time I was in middle school, I wouldn’t have survived it with a shred of self-esteem. Thunderbutt was my nickname. Luckily, by freshman year of high school, butts were a thing. I wore a mall girl’s version of Jenny From the Block’s green Versace dress from the 2000 Grammy’s to my prom. Jeggings got me through college. Without them, I would’ve subjected my classmates to plumber’s butt in my sad attempt to squeeze into Abercrombie jeans.

But beyond the issue of clothes, there’s the issue of men and my butt. They’re fascinated by it. It doesn’t matter where I am—the subway, the gym, Whole Foods—somehow, guys always manage to graze it. I often wonder if it’s intentional or if it’s just in the way.

It’s ballsy to cop a feel of a girl’s chest—a guy might get away with an extra-tight hug—but for some reason, people think the ass is up for grabs. Catcalls are a friendly hello—because multiple 311 calls to report harassment won’t change that they happen to me several times a day.

And it’s not just strangers—guys I date are amazed by the curve from my waist to my bum. They can play with it for days. I had a boyfriend who used to lick it. Another boyfriend couldn’t decide what he liked more—me or my ass. “Are you sure it’s real?” he kept asking.

A friend who was dating the actor Jamie Foxx asked me to wear a long baggy sweater once when we went out with him. I agreed to hide the fanny, but he seemed to be able to just sense it was there. When she wasn’t looking, he nonchalantly copped a feel, without even looking my way.

One pain in the rear I always endure is the inevitable spanking. It hurts! It still has nerve endings, people.

Men aside, my butt and I do face other challenges. As an adult, I can finally wear clothes that don’t involve spandex, it just involves a lot of extra work. I buy my dresses and pants multiple sizes bigger to be able to fit my rear, then get the rest taken in by a tailor.

European designers with their narrow hips and splashy patterns are out of the question. The only thing I can wear off the rack is black and clothes with stretch. Spanx are my pals, but even they seem to get lost in the crevices.

And then there are the logistical nightmares that come with having an ample bottom. It’s hard to pass through large crowds and squeeze in tight places. It’s impossible to move in between tables at a restaurant. It’s bound to catch on fire or knock over a glass.

My posterior also always manages to become the subject of conversation. There’s meaning behind the phrase “butt of the joke”—it’s impossible to be taken seriously when everyone is taking shots at my ass. When I reunited with my best friend after a month apart, the first words out of her mouth were: “I forgot how big your butt is.”

Girls stare just as much as men. They’re either fascinated or disgusted, maybe even jealous. If my butt could talk it would say “Judger, quit looking, you judger!”

I’m of European descent but people often ask if I’m Latina, mostly because of my butt. My friends joke that I’m black from the waist down.

When I’m not wearing heels, I feel dumpy. As crazy as it sounds, when my hair is up, I feel like I’m giving too much attention to my hips.

Those who have been truly blessed (or cursed) with a big butt generally find Kim Kardashian’s ass to be nauseating. The way she flaunts it to no end, the belfies (that’s butt selfies). It doesn’t need to be showcased. Everyone can see it, trust me.

When I hear about women who are considering rear augmentation, it lifts me up. There are people who want this. And so I’ve learned to embrace it.

As long as it’s still round and perky, I’ve got to appreciate it, because the older I get, the older it gets.

And so I’ve learned to remind myself daily that having such a big asset is a blessing, as long as I use it to get my way.  I’ll make it twerk, because as they say, never trust a big butt and a smile.

This essay was written anonymously by a New York City-based writer.