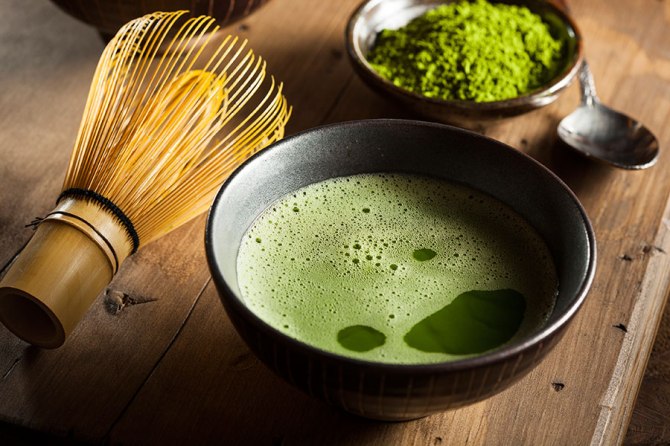 Not yet trumping avocado toast in its visual Instagram-worthiness but definitely as talked about (especially in those quaint cafes you pass on the way to work), matcha may have worked itself into that “superfood” category. But if you haven’t heard specifics about it (like, um, what it actually is), all the hype just turns to white noise. At the end of the day, what does the word “superfood” do for you if you haven’t got any info, other than knowing it’s an offering at a coffee shop’s menu or a gigantic Pinterest search offering? The stuff—a powdered green tea—has claims of having a variety of health benefits, including being rich in antioxidants and having a great metabolism-boosting effect. To get to the bottom of it all, we chatted with David Mandelbaum and Jessica Lloyd, founders of the matcha making company, PANATEA. They filled us in on what it is, its believed health benefits, and how to actually make it.

So what is it?
Like we said before, matcha is a tea, but it’s not like the stuff you see already stuffed in tea bags. It’s a green tea powder that’s tea bag-less. “With normal teas, you only consume the nutritional benefits that are steeped outside into the water. With matcha though, you consume the full leaf, and thus the full nutritional benefits, in only a few sips,”explain PANATEA founders David Mandelbaum and Jessica Lloyd. They also say that because it’s pure tea leaf, their specific matcha does not contain sugars or additives and when prepared in the traditional sense, can be thought of in the way of a “healthy espresso of green tea.”

While it may have the superfood spotlight as of right now, this powdered green tea isn’t anything new—it’s been around for centuries.

However, it’s being modernized so that it’s easier and more accessible to make at home, PANATEA saying they are the first to do so for “today’s generation.”

“At it’s core though, matcha is becoming popular due to its natural health benefits. It’s a nutritional powerhouse. There’s a reason why Samurai warriors used to drink it before battle, and Buddhist monks before meditation,” explain Jessica and David.

What are matcha’s benefits?
According to matcha makers PANATEA, who call it “nature’s panacea,” it contains amino acids, antioxidants, various vitamins and nutrients, and chlorophyll.

Physically speaking, Mandelbaum and Lloyd say that it supports your metabolism, promotes energy and alertness, and enhances antioxidant activity. They also note that their formula contains “over 14 times the antioxidant activity of wild blueberries on a per gram basis” and has been thought of as a healthy coffee alternative because of the apparent energy it provides.

In terms of beauty, that rich antioxidant component reportedly has great benefits for your skin and managing a healthy weight. “Antioxidants provide protection from harmful free radicals, which are responsible for aging and tissue damage. Our matcha also contains EGCG, a catechin that is especially known to boost metabolism,” say Jessica and David.

It’s also interesting to note that the ingredient, chlorophyll, that matcha in general contains has been stirring up health and wellness curiosities, more specifically in liquid form. It’s reported to be an energy source and that which can help rid your body of toxins, but that has yet to be confirmed.

What do you do with it?
Obviously, drink it! You can drink it as a tea, with added water of course, but it can be combined with many other things for a slew of treats, including lattes, baked goods, popsicles, pancakes, and more. “One of our favorite recipes are these matcha mochi waffles. They’re a weekend brunch staple,” Jessica and David note. “Our strawberry matcha pops are also a new favorite—the perfect refreshing snack for the summer.”

To make it, PANATEA recommends adding a 1-gram scoop of their formula into a bowl, pressing down on the powder to fully break it up, and then adding approximately 3 oz. of hot water (make sure it’s not boiling!) in a mug or a tea bowl. Next, whisk the matcha in an “M” and “W” motion.

What’s it taste like?
Obvious, but a food trend instantly becomes a million times better if you actually enjoy consuming it. The taste, our experts say, falls into that of a green tea without being bitter.”It’s rich, earthy, vegetal, and almost creamy!​​ It tastes healthy​, yet delicious and smooth.”