We’re used to seeing Margot Robbie with a wavy lob so when she stepped out at this evening’s Academy Awards in Los Angeles, it was a shocking moment. Robbie debuted new bangs and a ponytail on the red carpet. She looks totally different than she did at the Golden Globes and that’s why she’s such a fun star to follow. You don’t know what to expect but she pulls it off each and every time.

Robbie also didn’t lay low just because she’s not directly nominated for an Oscar tonight. She did produce Promising Young Woman, which is nominated for Best Picture so that’s a major feat on its own. Robbie’s longtime hairstylist Bryce Scarlett is responsible for this new look, which we assume is thanks to some carefully placed extensions. The low ponytail and blunt, piece-y bangs, created with gHD hair tools, are so on-trend for spring and summer. The casual glam goes perfectly with her sparkly Chanel gown. We love the juxtaposition. 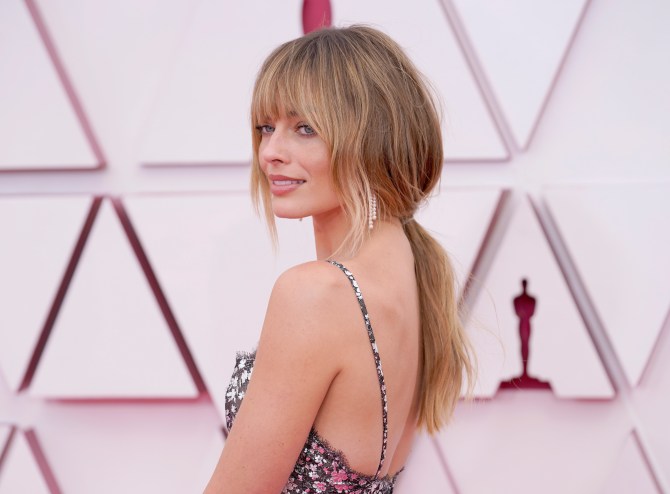 Now, we can’t forget about the makeup. Pati Dubroff turned her client into a bronze goddess with Chanel Beauty makeup. “All about a bronzey sunshine glow,” she wrote on Instagram.

Robbie is also there to support Carey Mulligan, who is nominated for Promising Young Woman. In a December 2020 interview with The Hollywood Reporter, Robbie spoke about how her production company and elevating female stories.

“We never started a company to be a starring vehicle for me or to be a platform for me to chase my dreams,” she said. “It was really that we wanted to expand what female stories and female storytellers could do in this industry, and I don’t need to be onscreen for that to happen. But it’s a wonderful position to be in since my platform can also open some of those doors. And especially at the beginning, there were a lot of first- and second-time filmmakers that we wanted to work with, and you can’t get something greenlit without a bankable name attached and I’m so lucky to fall into that bracket. But I’m not right for every role. I felt that way about Promising Young Woman.”