Tuesday was the 2021 Brit Awards, which might not be as popular here in the States but feature some serious stars. One of those is Game of Thrones star Maisie Williams with her blonde hair and bleached eyebrows shocking fans in the best way possible. She was there to present Taylor Swift with the global icon award.

“If anyone who knows me at all knows that Game of Thrones is my life. So, the fact that Maisie was here to present this, I want to grab you,” Swifts said onstage. “I can’t, since we’re social distancing, but thank you so much for coming here to do this.” What an iconic duo.

If you’re one of Williams’ 10.6 million Instagram followers, chances are you already got a peek at her edgy bleached blonde hair. She posted a series of photos announcing her new gig as a WWF global ambassador for climate and nature, as well as her 24th birthday get-together. 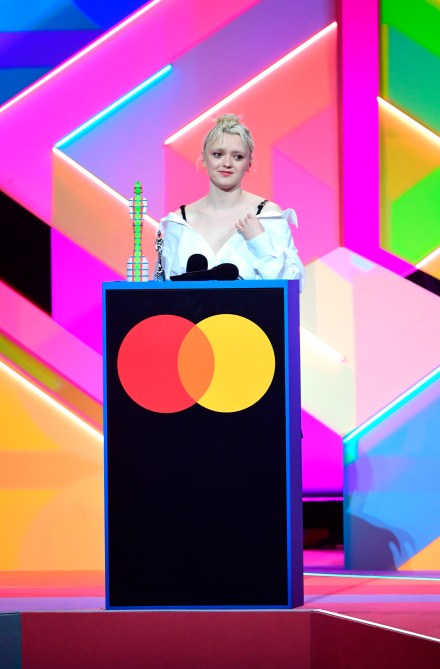 Still, there was something about her dressed up wearing white at the show that made the look all the more shocking.

Williams has not been shy about experimenting with her hair. We were obsessed with the post-Thrones pink, as well as the cool-girl shag. But this new look could be for an upcoming role. According to Entertainment Weekly, Williams is set to play punk icon Pamela Rooke (also known as Jordan) who had platinum blonde hair during the early days of the Sex Pistols.

Although it looks amazing on her, it would make sense she would make such a drastic change for a big gig. The upkeep on platinum blonde hair and brows is intense, needing to be touched up every 2-3 weeks. That’s a lot of time and effort. We’ll find out when Danny Boyle’s Sex Pistols FX series hits the small screen.