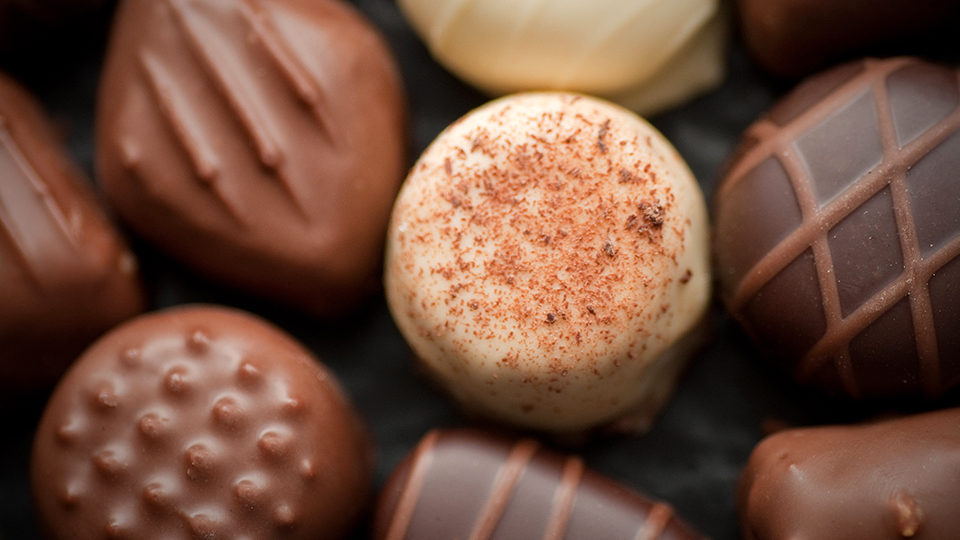 Lindt dark chocolate with sea salt is my favorite after dinner—perhaps three or four squares, perhaps half the block if I’m really feeling it. If that’s not available, it’s Lindt dark chocolate with mint, which I think pairs well with peppermint tea. If that can’t be found, I’ll move to Rittner dark chocolate with hazelnut from the convenience store near my apartment. On very special occasions, I allow myself a Cadbury Creme Egg. Tim Tams when I visit my family in Australia. Those are the best days.

Over the past six years I’ve become really interested in health and nutrition, but there’s just one habit I can’t give up: chocolate. So although I no longer pretend that a protein bar and Diet Coke are acceptable lunch foods (I was heavily in denial throughout most of 2009), and I’ve purged my life of soda, greasy takeout, and processed foods, my daily chocolate ritual has stuck like glue. A sweet, delicious glue.

This all changed for me about three months ago after I visited medicinal herbalist Daniela Turley. After a few tests and a long chat, she explained that craving chocolate can sometimes be more than just a desire for your daily sugar fix, and eating it in healthier amounts doesn’t just have to come down to sself-control “First there is is a sugar-craving element and second the chocolate component. There may be a nutrient that is in chocolate that the body is craving,” she told me, recommending a magnesium supplement and sending me on my way.

After taking that supplement for three months, I had not touched a piece of chocolate. Nothing. Not even a square of Lindt sea salt dark chocolate with my peppermint tea after dinner. Not even a Cadbury Creme Egg over Easter. Nada. And here’s the thing; I didn’t even realize I wasn’t eating chocolate until I hit Whole Foods and realized I had not replenished the stash for nearly a month. (That never happens!) Somehow, without conscious effort, my lifelong obsession for sugary cocoa just vanished. It could be a coincidence, but I’m putting this down to the addition of two magnesium capsules every night after the gym and before dinner.

MORE: How to Eat to Balance Your Hormones (and Never Have PMS Again!)

I went back to Turley for answers, and she told me that magnesium deficiency is very common and impacts more than half of all Americans. “We need magnesium for more than 300 biological reactions in the body, including blood sugar balance,” she said. Apparently, there were some telltale signs early that made Turley think I could be deficient: “Symptoms of magnesium deficiency include agitation, restless leg syndrome, irritability, insomnia, and PMS. As chocolate is high in magnesium, chocolate cravings can be a sign of low levels, especially if you have some of the deficiency symptoms.”

This is the obvious part, but if you want to start taking a supplement, it’s always helpful to consult a professional to make sure you’re taking a safe amount. “The [recommended dietary allowance] for women over 30 is 320 mg, but you can take less and get good results,” she said, recommending a type of magnesium called L-threonate. “It is a form of magnesium that crossed the blood-brain barrier and is deeply relaxing, I suggest taking 150 mg at night.”

There are some other welcome side effects of the supplement too, especially if you’re stressed out or struggle to relax at night. “Quite often people feel calmer almost immediately, especially with magnesium L-threonate.” When it comes to killing chocolate cravings, that can take a little longer, as “you are dealing with hormonal and receptor changes.” Turley suggests taking magnesium for two months to make the correction. At the same time, there are apparently other nutrients you can focus on to help beat cravings for candy including zinc, chromium, fish oil, magnesium, and herbs such as cinnamon, bitter melon, billberry leaf, and ginseng.

It’s been months since I started on the magnesium, and I will preach its virtues to anyone who will listen. Right now there is a full packet of chocolate Tim Tams—my favorite, all the way from Australia!—sitting in my fridge and, for once, I feel nothing toward them. There’s no overwhelming desire to polish off the packet with my friends after dinner or to snack on just one when I get home from work. And trust me, even the most disciplined person couldn’t achieve that without a little supplemental help.