I don’t know about you but every year I look forward to Shark Week on the Discover channel. Okay, sharks do scare me a little but I’m also completely fascinated by them. I’m learning even more about ocean wildlife thanks to Lush and the company’s continued protection efforts. Each year to coincide with World Oceans Day (which was last Saturday), Lush releases its Shark Fin Soap, a seriously adorable ocean-blue bar soap with a tiny little “fin” on top. It helps raise awareness of the decreasing shark population (90 percent in the last 40 years!) and supports ocean conservation at the same time. The limited-edition vegan soap features softening Arame seaweed, exfoliating sea salt and zesty lime oil.

“Sharks are the entry point to a greater conversation on ocean protection,” says Carleen Pickard, Lush Ethical Campaigns Specialist in a statement. “We’re in the midst of a global climate crisis and sharks play an integral role in maintaining the health of not only our oceans but the planet too. With this campaign, and through the continued work of The Rob Stewart Sharkwater Foundation, we’re educating the public on actions they can take before our oceans become unthinkably blue.” 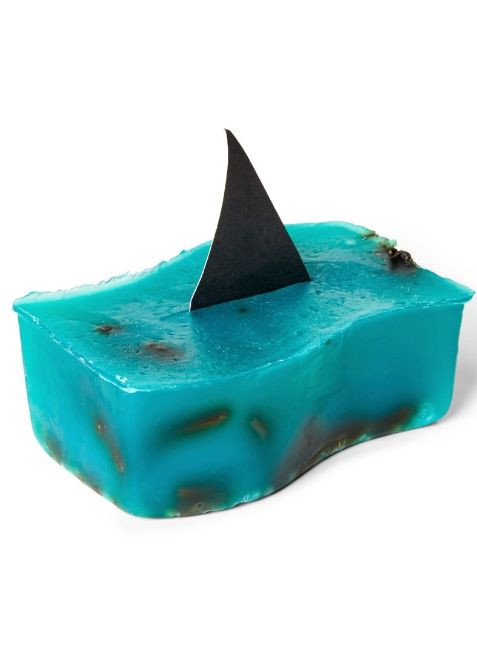 You’ve probably heard of squalene, as it’s popping up in every other skincare product, lipstick and sunscreen. It has incredible moisturizing properties and I’m a huge fan of the way it smooths my skin, leaving it dewy. But did you know squalene was originally sourced from shark liver? Ew. Many companies made the switch and now use vegan squalene created in a lab that works just as well and doesn’t endanger sharks. But some brands haven’t made the switch. Lush is hoping to raise awareness of the problem so when you go to grab a moisturizer, you can check and make sure it’s shark-free.

Lush is also highlighting seven Charity Pots during the shark campaign. You probably already know the popular body lotions that donate 100 percent of the sales price to different charities. This year, you can shop and support the health of coastlines and ocean creatures thanks to companies including Fins Attached, All One Ocean and R.O.L.E. Foundation. 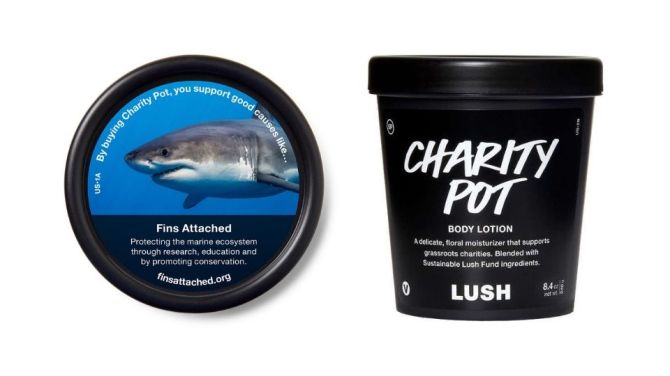 Shop the Shark Fin Soap for $5.95 in Lush stores and online and 100 percent of the sales price goes to the Rob Stewart Sharkwater Foundation. All charity pots are $7.95, also at Lush.