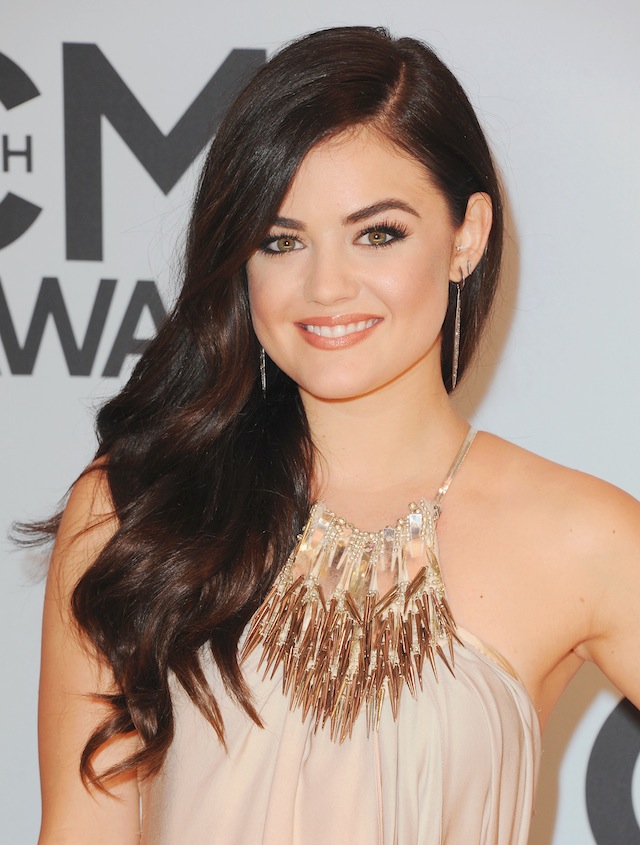 As major “Pretty Little Liars” fans here at Beauty High, you know we have our eyes on the show’s stars – and given the fact that you can hardly read a magazine or turn on the TV without seeing one of them, we’re constantly on watch. Lucy Hale was of course spotted at the CMAs last night (she is working on her very own country album after all) and was gorgeous, per usual. We talked to her makeup artist about the look – since it’s one that just about anyone could wear on their next night out.

Makeup artist Kelsey Deenihan said that since Lucy was wearing such a gorgeous pastel flowy dress, she knew she had to make her makeup look both glamorous and standout, but not let it overpower the sweetness of the overall look. So, they decided to let her eyes be the focus, and drew inspiration from the colors in the dress. Below, Kelsey breaks down how she got the look.

“I began by prepping her skin with Nourish moisturizer by Lancer Skincare. This product soaks into the skin leaving it hydrated throughout the night allowing the makeup to continually look even and fresh. For Lucy’s skin, I mixed Armani Luminous Silk Foundation in 5 and 5.5 and applied it with a fluffy brush working from the center of her face outward. For any areas that needed extra coverage and to brighten under the eyes, I used Cle de Peau concealer in Ivory. Next I applied mark Just Blushing Powder Blush in Cameo to create a deep contour and topped off the cheeks with the pinks of the mark Wonder Glow Blush & Glow All Over Face Palette.  I swept it high across Lucy’s cheekbones allowing the subtle shimmer to illuminate her skin.”

“To make Lucy’s eyes pop, I used the mark 10 Year Anniversary Eye Shadow Palette in the left two colors (the M and A) all over her lid. I lined the top and bottom with both mark No Place to Run Longwear Eyeliner in Jet Set and Foxy Brown. For the inner corners of her eyes, I used the white shade (on the far right) of the mark 10 Year Anniversary Eye Shadow Palette. The brightness in the corners or her eyes allows the shadow to catch the light and reflect it and makes Lucy’s eyes appear larger. I finished her eyes with two generous coats of mark Scanda-Lash mascara in Blackest Black.”

“To finish Lucy’s look, I applied mark Make It Rich Lip Crayon in Naturally. This sweet peachy pink allows the focus to be on her eyes, but also compliments her dress and her overall look.”